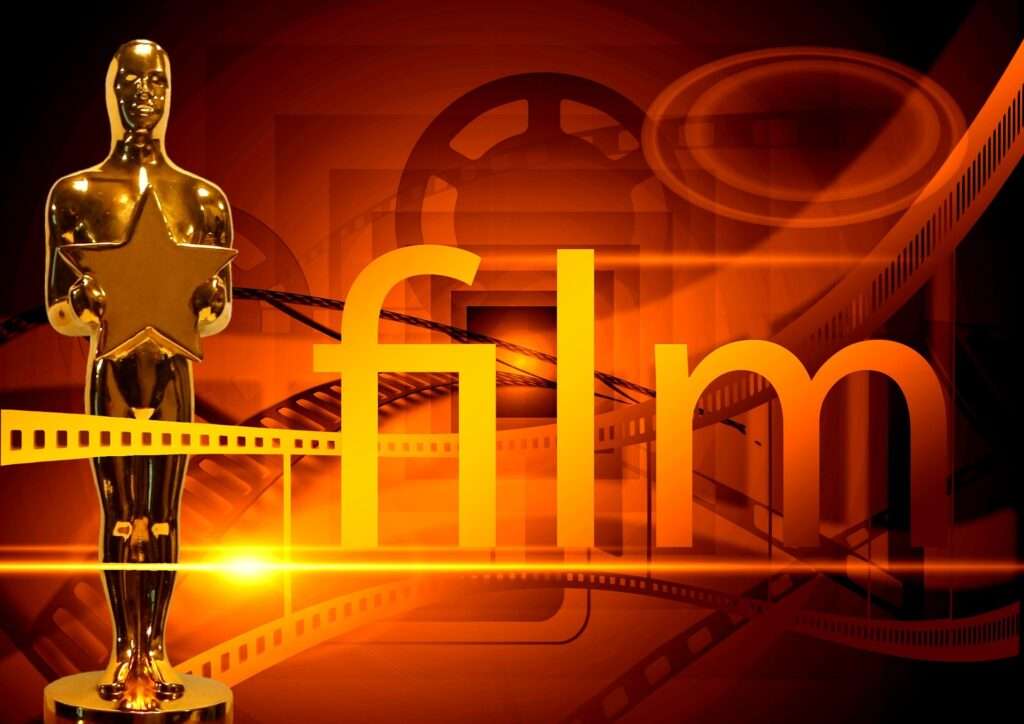 Update: Almost a clean sweep – 5 out of 6 astrological predictions correct. Only one prediction incorrect, Best Director. That went to Guillermo del Toro, who directed the Pisces fantasy Best Movie The Shape of Water. My choice, Jordan Peele, did, however, win an Oscar for Best Original Screenplay for Get Out, so I count that as a win!

Every year I check out what’s happening at the Oscars (Academy Awards) to see whether astrology can highlight the winners. Last year’s event was dominated by a Solar Eclipse: Oscars 2017 and there was a classic eclipse mistake when the wrong film was announced as the winner of the Best Picture award!

This year’s event takes place on Sunday 4th March 2018 (astrology chart below), when there are a flood of planets in watery Pisces, the star sign associated with the sea. We have flooding here in the UK and no doubt there’ll be tears and emotional outpourings on the big night at the Oscars ceremony.

Plus, the Sun in Pisces is closely conjunct Neptune, Pisces’ planet, adding a dreamy, glamorous quality to proceedings. Neptune rules film in astrology, linked to fantasy and the realm of the imagination.

The other important factor to note astrologically is Jupiter in Scorpio. Jupiter is the planet of good fortune and often prominent at times of success. This may give a nod to Sun Scorpio and the water signs, Cancer, Scorpio, Pisces could all do well.

Jupiter in Scorpio is also a symbol for the #MeToo #TimesUp movement. Jupiter is the truth-seeker and Scorpio rules all things taboo, including sex. Scorpio’s ruling planet is Pluto, God of the Underworld, and traditionally linked to the colour black. Black dresses have so far dominated awards season.

As last year, the 2018 Oscars are being hosted by Jimmy Kimmel (b. November 13 1967). Born on a Sun/Neptune conjunction in Scorpio, he’s the perfect host befitting the astrology.

Let’s take a look at the major categories:

We only have a time of birth for Meryl Streep in this category. What’s intriguing is three Sun Cancers up for the Oscar, Frances McDormand, Meryl Streep and Margot Robbie. Traditionally, Cancer is the star sign associated with the mother and the family, yet it’s a surprisingly creative star sign and one of the four cardinal signs, i.e. leaders of the zodiac. Cancer is one of the three water signs and the Moon ebbs and flows which means that Sun Cancer actors often bring a strong emotional connection to their performance.

This category could be classed the oldies v. the youth. Three respected actors born in the 1950’s, two up-and-coming young actors including a 22 year old, Timothee Chalamet. There are times of birth in the public domain for the three older actors but not for the younger actors.

Timothee Chalamet’s astrology is intriguing because he has a stellium of four planets in Capricorn from 20 to 29 degrees, not including the Sun. The stellium is receiving lovely transits from both Jupiter in Scorpio and the Pisces trio of Mercury/Venus/Chiron. I loved the movie and could easily watch it again.

Denzel Washington’s birth chart is strongly triggered, as he has a Grand Water Trine with Venus at 23 Scorpio, the exact same degree as Jupiter’s current transit through Scorpio.

The one to watch, however, is Gary Oldman. Although he’s a Sun Aries, his Midheaven (career point) is 10 Pisces, which means the Sun/Neptune conjunction is in his 10th house of success. Plus, the recent Full Moon on March 2nd fell at 11 Virgo 23 cutting across the foundations of his birth chart. The Full Moon often brings achievement making him my choice for the Oscar.

I only have a time of birth for Allison Janney but even without a time of birth, her astrology looks promising and she’s one of the favourites to win. Her Sun is at 26 Scorpio conjunct Mars at 20 Scorpio, so Jupiter by transit sits between the two and she’s the star sign of the moment.

Not a lot else to say about this category, except that Octavia Spencer has her Sun at 4 Gemini, so not far away from the Midheaven (success point) of the Oscar’s chart. Also, Lesley Manville’s Sun is at 22 Pisces and receives a lovely trine aspect from Jupiter at 23 Scorpio.

Times of birth for both Sam Rockwell and Willem Dafoe in the public domain. Christopher Plummer stepped into Kevin Spacey’s shoes to take on the character of J. Paul Getty. He was the perfect choice because J. Paul Getty’s date of birth is December 15 1892, and both the actor and the character are Sun Sagittarius, only two degrees apart in the zodiac. It often transpires that actors excel in roles of characters where there’s a match between the astrology.

Two more water Sun signs in this category, Willem Dafoe, Sun Cancer, and Sam Rockwell, Sun Scorpio, tapping into the water sign vibe this weekend. Richard Jenkins is having his Jupiter Return, his Jupiter at 23 Scorpio, which gives a nod to him. Christopher Plummer is quite remarkable as he’s already experienced his third Saturn Return and his Uranus Return and is still being nominated for top awards.

My favourite for the Oscar, however, is Sam Rockwell, his Sun at 13 Scorpio and his Midheaven at 13 Cancer. This means that the Sun/Neptune conjunction at 13/14 Pisces creates a positive Grand Trine Aspect in his birth chart. Plus, he has Neptune, the movie planet, at 25 Scorpio, which means Jupiter at 23 Scorpio is close by.

Personally, I’d love Greta Gerwig to win for Lady Bird. A Sun Leo, she has Mars at 24 Cancer so Jupiter at 23 Scorpio makes a positive trine aspect to her natal Mars. Without a time of birth, however, we don’t know whether Mars is linked to her career which would be helpful.

My vote is for the Sun Pisces director, Jordan Peele. He has Mercury at 12 Pisces so the Sun/Neptune conjunction at 13/14 Pisces is almost directly upon it. Plus he has Uranus at 21 Scorpio so transiting Jupiter at 23 Scorpio is close by. That all feels magical enough for me to warrant a win.

I haven’t seen all the movies but you could probably make a strong case for a few of the movie themes which resonate with the current astrology.

The clear symbolic contender, however, is The Shape of Water, which not only has a Pisces title but stars a mute woman (water signs are mute, i.e. instinctual) and a romantic love story with an amphibian creature (totally Pisces). Plus it’s directed by Guillermo del Toro who is a master at fantasy movies, another Pisces theme. Pan’s Labyrinth is one of my favourite movies of all time.

Astrologer’s Choice: The Shape Of Water 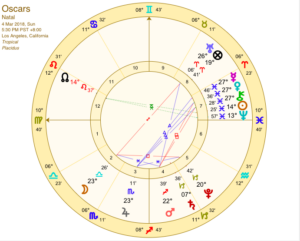