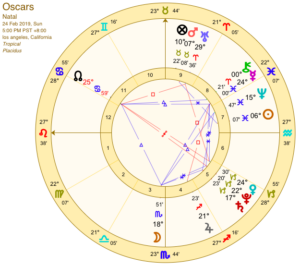 UPDATE!!! How exciting. The astrology worked beautifully for the Oscars. As predicted wins for Regina King, Rami Malek, Mahershala Ali & Alfonso Cuaron. And Olivia Colman did come through as the outsider to pick up Best Actress (see below) which delights me as I love her! Roma won Best Foreign Film & Best Cinematography so a great night for the ‘Sagittarius’ film.  Lady Gaga & Bradley Cooper won Best Song – it would have been a travesty if they hadn’t and well deserved. Plus, Viggo Mortensen must be thrilled with Best Film for Green Book and he had a gorgeous Jupiter transit too (see below). I haven’t seen the Best Film yet so there’s a treat in store for me.

I am super late looking at the astrology for the Oscars 2019 as I was away last week. I started having a look at the actors up for the top prize and the astrology of the moment last night and I was hooked. So here are my predictions through the eyes of an astrologer.

I always start by looking at the astrology chart for the time of the Oscars ceremony (see chart on left). This year’s major astrology is the square aspect between the planets of hype & glamour, Jupiter in Sagittarius and Neptune in Pisces.

The square isn’t tight at the time of the Oscars as Jupiter is at 21 Sagittarius and Neptune at 15 Pisces. However, with both planets in their signs of rulership, it’s got to spell good news if an actor’s astrology is picking up on the ‘big (Jupiter) dreams (Neptune)’ vibe.

Note also the Midheaven (success point) of the Oscars chart is 23 Taurus and there are two close aspects to note. The Sun at 6 Pisces is applying to a sextile aspect with Mars at 7 Taurus, so Taurus is a sign to note.

Also, Venus, the ruler of the Taurus Midheaven, is at 24 Capricorn, separating from a conjunction with Pluto at 22 Capricorn. The Venus/Pluto conjunction highlights some of the key themes of the best films this year (see below).

It’s hard to rule out the favourites this year. I hope you find the astrology both intriguing and insightful.

Here’s a quick astrological whizz through the top categories.

Glenn Close is the favourite to win. She now has 7 Academy Award nominations without a win, the most of any actor. Her Sun at 28 Pisces is trine lucky Jupiter at 27 Scorpio in her horoscope. Therefore, it was her Jupiter Return at the end of last year. There is a time of birth for Glenn Close which makes her Midheaven, 3 Taurus, so she does have transiting Mars conjunct her career point. It’s not strong astrology for a win but it was a stunning performance!

There is a time of birth for Lady Gaga (not the other three nominees) and she has some lovely astrology. Her Midheaven (success point) is 3 Pisces and lucky Jupiter is at 8 Pisces conjunct her Midheaven (n.b. the Sun at 6 Pisces during the Oscars ceremony). Plus, she has a Jupiter-Neptune sextile aspect in her birth chart, so she’s in tune with this year’s Jupiter-Neptune vibe. Do I think this warrants an Oscar win? Yes, for best song but not best actress.

Yalitza Aparicio is a new star thanks to Roma. Her Sun is at 19 Sagittarius, so she’s currently having a super Jupiter transit, but the year of her birth isn’t confirmed. Either way, she’s young – 25 or 26 – and having a wonderful peak moment in her life. I don’t think she’ll win but I do think she’ll have plenty to celebrate.

No time of birth for Melissa McCarthy or Olivia Colman. What I find intriguing about Olivia Colman is that she’s born on the exact same day as Christian Bale and they are both the outsider to win, i.e. second favourite.

Also, depending what time they were born, they may have a Uranus transit of their natal Moon if it’s late degrees Aries or early degrees Taurus. Uranus often springs a surprise. I’m intrigued by the astrology and wouldn’t be surprised if one of them picks up an Oscar.

Astrologer’s Choice: no clear favourite but I think Glenn Close will win

There are times of birth for both Bradley Cooper & Willem Dafoe, but not the other three actors. This is the second year that Willem Dafoe has a nomination, he was in the running last year too for The Florida Project. I liked his astrology better last year because he has a Scorpio Midheaven and lucky Jupiter was in Scorpio. Like Meryl Streep, he was born on a tight Sun/Uranus conjunction in Cancer, which is great for character acting.

Viggo Mortensen will always be immortalised in my heart as Aragorn in Lord of the Rings – still my fantasy swoon! A Sun Libra, he’s been nominated 3 times but never won an Oscar. No time of birth for him but with his Saturn at 21 Sagittarius he has an exact Jupiter transit. Something’s going well for him right now and he will be celebrating on the night.

Finally, the bookie’s favourite is Rami Malek, a Sun Taurus. I don’t think it was the best acting role personally but he morphed into Freddie Mercury in a mesmerising performance. His Neptune is at 24 Sagittarius so Jupiter’s heading towards it by conjunction. Plus with his Mars at 12 Taurus, he’s having a Mars Return and his Sun at 21 Taurus is conjunct the Oscar chart’s Midheaven.

Astrologer’s Choice: Some lovely astrology for the Best Actors – I still think Rami Malek will win

The hot favourite with the bookies is Regina King, first time nominee and we have a time of birth for her. A Sun Capricorn, she has a gorgeous Sagittarius triple conjunction in her birth chart. Jupiter at 0 Sagittarius, Neptune at 2 Sagittarius and Venus at 8 Sagittarius, all in the 10th house ruling her career. Plus her Sun is at 24 Capricorn, so Venus is exactly on it during the Oscars ceremony.

Amy Adams has been nominated 5 times but never won. A Sun Leo, she’s having a lovely Neptune transit to her Jupiter at 15 Pisces and she’s a strong contender.

Like her co-star, Yalitza Aparicio, Marina de Tavira is a Sun Sagittarius born with her Sun at 8 Sagittarius conjunct Neptune at 9 Sagittarius. No time of birth for her.

Finally, the two actresses from The Favourite, Emma Stone and Rachel Weisz, have both won one Oscar previously – Emma Stone for La La Land and Rachel Weisz for The Constant Gardener. The most convincing of the two this year astrologically is Rachel Weisz as her Sun is at 16 Pisces and Neptune is applying to her natal Sun. No time of birth for Rachel Weisz but she beat Emma Stone to the Bafta earlier this month.

Astrologer’s Choice: some great astrology in this category – I think Regina King will sneak it

There are times of birth for everyone in this category apart from Reg, Richard E. Grant.

Mahershala Ali won in 2017 for his role in Moonlight when Neptune was exactly conjunct his natal Mercury. The astrology isn’t as convincing this time around but he does have an amazingly lucky birth chart.

The Sun at 28 Aquarius is his career planet and he was born on a Sun/Jupiter conjunction. Plus, his Ascendant is 28 Libra with the planet of surprises, Uranus at 27 Libra, both trine to the Sun/Jupiter. Gorgeous! His minor planets are boosted during the Oscars – Venus at 26 Capricorn, his Venus Return, plus Mars at 24 Taurus conjunct the Oscar chart’s Midheaven. He’s born only a couple of weeks after Christian Bale & Olivia Colman.

The one to watch astrologically is Adam Driver, a Sun Scorpio. He has Jupiter at 16 Sagittarius in a wide conjunction to Uranus at 8 Sagittarius, both close to the Midheaven at 10 Sagittarius. Compelling astrology because of the Jupiter-Neptune square.

Sam Rockwell won last year for Three Billboards Outside Epping and being a Sun Scorpio, I would guess that was his year when Jupiter was in Scorpio. He had some lovely Neptune transits in 2018 too.

Reg (Richard E. Grant) is a delight and he is a Sun Taurus, so in tune with the Oscar’s chart. His sheer joy at being nominated for the first time in his early 60’s has been great pre-Oscar entertainment. Without a time of birth for him, there’s not a lot to suggest the Oscar is his.

Sam Elliott is also a first-time nominee in his mid-70’s. He did say if he was to offer a response to his nomination, it would be ‘it’s about f–king time’.

Astrologer’s Choice: I love Adam Driver’s astrology but the minor planets could make it another win for Mahershala Ali.

I don’t have a time of birth for any of the directors, so this is a quick look at their astrology.

From a Sun-sign perspective, you have to fancy Spike Lee (Pisces) or Alfonso Cuaron (Sagittarius). Spike Lee’s Sun is at 29 Pisces so not in the Jupiter-Neptune vibe.

I love that all the nominees involved in Roma – Marina de Tavira, Yalitza Aparicio & Alfonso Cuaron are Sun Sagittarius and that’s where lucky Jupiter is this year. This suggests that the film will definitely come home with some wins and may be the biggest winner of the Oscars.

Alfonso Cuaron is the favourite for Best Director but Yorgos Lanthimos has a good shot. He has a stellium of planets in Gemini with Saturn at 21 Gemini, so Jupiter’s currently triggering his natal Saturn by opposition. Without a time of birth, we don’t know whether this is related to his career but it’s nice astrology.

Astrologer’s Choice: I think the favourite, Alfonso Cuaron, will benefit from the Jupiter in Sagittarius vibe.

I don’t have a clear favourite for Best Film looking at the astrology. There are some obvious themes picking up on the Venus/Pluto conjunction, as Pluto is a symbol of racism & corruption and rules the colour black – immediately that gives a nod to Black Panther, BlackKKlansman, Green Book & Vice. The Favourite has three strong female protagonists (Venus rules women) and there’s all kinds of underhand goings-on in the movie, which I loved.

A Star is Born is the film that most obviously links in to the Jupiter-Neptune vibe – I loved the first half of the film but found the second half too schmaltzy. I preferred Bohemian Rhapsody, which I know isn’t the same for everyone.

Roma is the favourite to win and I thought it was beautiful and evocative. A black & white movie, there is a nod in the astrology towards the film winning as the Moon in Scorpio is conjunct the IC in the Oscar’s chart. Roma is the story of Alfonso Cuaron’s childhood and both the Moon and the IC symbolise the past in astrology. Plus, the Moon’s next aspect is to Pluto and this does pick up on some of the key themes of the movie (without giving you spoilers).

Therefore, I would guess Roma has a good chance to win. Also, note the three Sagittarius nominees and Roma is also up for best foreign film. That would fit lucky Jupiter in Sagittarius and the global theme.