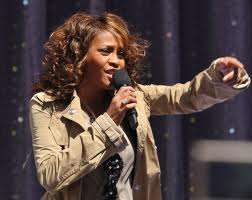 I was deeply saddened to read of the passing of Whitney Houston and amazed that she was born the year before me. I feel as if her songs have been with me throughout my life.

A gorgeous Leo, she married her opposite in many respects, Bobby Brown, a bad boy Aquarius. Their Sun signs exactly opposed one another across the zodiac at the same degree. (You can read more about Sun signs opposites in love at Opposites Attract). A lot has been written about their 15 year relationship and it’s not for me to add to the much-publicised literature on their marriage. What interests me as an astrologer is her personal birth chart.

As so often is seen in the charts of mega stars, Neptune plays a prominent role and in Whitney’s chart is square to the Sun/Venus  in Leo. Neptune is the planet that represents fame, glamour and celebrity, because Neptune is the planet that wants to escape reality. It’s domain is the fantasy world and a world that pulls on Leo’s heart strings in particular, because Leo adores being in the spotlight.

Neptune rules music and here we find a woman who inspired millions with her amazing singing; “I Will Always Love You” was the bestselling single by a female in history. The trouble begins for Leo when the spotlight fades and life returns to the humdrum, the ordinary, the normal.

I often talk to clients about Neptune saying it’s the saint or sinner within you; whichever way you go, it’s the same urge to transcend reality. Some people do this through spirituality, a conversation with the Divine, music, poetry or art; others spiral in to drink, drugs or delusion.

Dear, sweet Whitney Houston battled with drugs throughout her troubled marriage and is yet another victim of an early rise to fame. Let us hope that future celebrities and stars become wise to Neptune’s contradictions and extremes and let us hope too that Whitney Houston, Diva, Mega Star, Leo Extraordinaire rests in peace. Bless you, Whitney, and thank you for the music.

[photo by asterix611 at flickr.com]