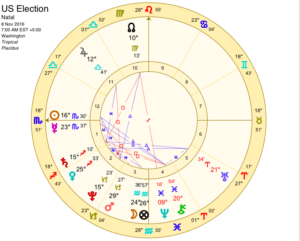 As I’m on my own personal NaNoWriMo writing challenge and posting a blog a day throughout November, I couldn’t really avoid today’s momentous election in America. Today is November 8th 2016, potentially a huge turning point in world events. Hillary Clinton or Donald Trump? Who will win?

This article may not give you a definitive answer but hopefully it will help reveal some of the astrological factors involved and the bigger picture lying behind this year’s major political and world events.

The majority of astrologers on the run up to this election have been predicting a win for Hillary. Both charts are below so you can take a look for yourself. Keeping this simple, sometimes the best form of prediction, Hillary is a secretive, powerful Scorpio and we know this immediately because even though different birth times have been mooted, not one is definite. Scorpio likes to keep things private. (The chart for Hillary below is drawn up for 12 noon as the time remains unknown).

Donald (I refuse to call him The Donald!) is a Gemini, the sign of communication, also known for its dual nature. Interestingly in astrology, Gemini and Scorpio are soulmates – 6/8 signs apart in the zodiac – although that might not be evident right now!

What marks Donald’s chart out as special is the fact that he was born on an eclipse: the Sun at 22 Gemini opposite the Moon at 21 Sagittarius pulling in the karmic nodes at 20 Gemini/Sagittarius. Eclipse babies often have a powerful destiny to fulfil and you can’t deny that Donald is currently on a mission.

The other dominant astrology that leaps out at you in Donald’s chart is assertive Mars in Leo conjunct the Ascendant. Here’s the bravado, the bluster, the strong sexuality. Mars is the male planet and this is a loud and confident placing.

Note in Hillary’s chart, she also has Mars in Leo and conjunct Pluto and Saturn no less. We don’t know where it sits in her chart but this is no shrinking violet! The presidential debates have been marked by aggravation and pushy tactics on both sides. The clash of Mars!

You can see why astrologers are voting for Hillary to win as she has the better transits on the day. (The chart above shows today’s transits so you can see where the planets are currently.)

The major transit exact right now is Saturn at 15 Sagittarius trine her powerful Mars/Pluto conjunction in Leo so this strengthens her own power. Minor transits include her Mercury return (exact 6th/7th November), which often coincides with good news! and the Sun at 16 Scorpio conjunct her natal Venus. Plus the election chart has Scorpio rising with the Sun and Mercury hugging it close. Scorpio rules!

Note too that Jupiter is at 12 Libra and completing a conjunction to her natal Neptune and not surprisingly, the last few days have been fraught with scandal. This might yet be her undoing.

Her progressions back up her strong position as she has the Sun progressed conjunct Mercury progressed in Capricorn, the sign of authority. Not necessarily a symbol of success but a powerful symbol for communication.

Donald doesn’t have any exact transits which stand out apart from Mercury at 23 Scorpio conjunct the IC of his chart. Is he ‘coming home’ or ‘going home’? Yet he currently has his progressed Sun close to his late degrees Leo Ascendant. His progressed Sun is now at 0 Virgo 14 which means it was slap-bang on his Ascendant three months ago and still extremely powerful. His big personality is there for all to see.

Donald is heading for his Jupiter Return, exact on December 4th 2016, and this often promises success yet Saturn is moving in on his Sun/Moon opposition and this could dampen down the party. Saturn is exactly conjunct his Moon on December 30th 2016 and opposes his Sun on January 15th 2017.

Yet this is a new Saturn because it’s now in a trine aspect with Uranus in Aries and Uranus is exactly trine Donald’s natal Moon on November 19th 2016, so it’s triggering his Sun/Moon opposition. The potential to win is there but if he does, it’s likely to prove much harder than expected thanks to Saturn.

You can see from the astrology above why astrologers have gone for a Hillary win. However, we have to take into account the bigger picture and this has more to do with the fact that there are some major astrology aspects currently within orb, even if they are not exact right now.

One planetary square aspect coming to a close is Saturn in Sagittarius square Neptune in Pisces. This was most powerful between November 2015 – September 2016, yet these two planets are still creating a square aspect in the zodiac. Neptune dissolves, Saturn rules structure and boundaries.

Because of this planetary aspect, astrologer Penny Thornton has predicted that whatever happens at this election and, just like the UK Brexit vote, the country will regret their decision. Saturn-Neptune connections represent disillusionment.

Yet the bigger and perhaps more important planetary aspect is Uranus in Aries square Pluto in Capricorn. These two planets are slow-moving, their theme is ‘out with the old and in with the new’ and their clash has coincided with upheaval and change around the world.

They first came within orb in 2011 when Uranus entered Aries and between 2012 to 2015 they made an epic 7 square aspects. This last year they have given way slightly to the mutable T-square between Jupiter in Virgo, Saturn in Sagittarius and Neptune in Pisces.

Yet now they’re back because Jupiter has entered Libra and is beginning to trigger a cardinal T-square between Jupiter in Libra, Uranus in Aries and Pluto in Capricorn. In fact, Jupiter is already within 3 degrees of its square to Pluto and will kick in later this month when these two power-brokers are in an exact square aspect on November 24th 2016.

This theme is huge astrologically from November 2016-September 2017.

So change is on the horizon and you see this clearly if you look at the current astrology for the charts of the USA and the UK. Whatever happens in today’s vote and just like in the UK this year, once again a nation will be divided.

It will take a lot of compassion and goodwill to bring back unity and for love and peace to reign. Sometimes you have to fall apart to rediscover what’s important to you so you can realign with values that serve humanity. 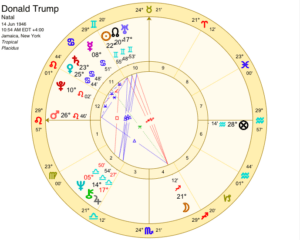