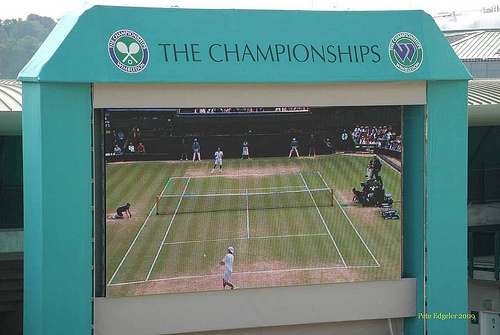 Update: Sunday 7th July 2013. WOW!!!! Andy Murray has won Wimbledon and I am delighted for him. What an emotional final. My head was with Djokovic and being a Brit my heart was with Murray. All I can say astrologically is Andy’s Mars return was almost exact to the day and with the backing of the country behind him, he wasn’t going to give up that title without a fight, especially after losing last year to Federer & then crying! Djokovic didn’t play as well as he could in my opinion, certainly not as brilliantly as his epic semi-final against Del Potro, the match of the tournament for me.  I’m not too disappointed about my prediction and I feel I got a lot right. It’s risking a lot putting my astrology predictions on the internet but I love doing them and I shall continue. Thank you to all of you who read my blogs and comment. Your support is so much appreciated. Well done, Andy Murray, 1st British men’s singles champion for 77 years. Amazing!

Final update same day: Just seen a post on Facebook which says that Murray’s progressed Midheaven was today at 2 Cancer 52 with Jupiter bang on it. Just checked and it is. Another astrology tool to add to the tool-kit…!

The Wimbledon tennis fortnight begins next Monday, June 24th 2013, and it’s time to see if astrology can predict the winner. At time of writing, the top 8 in the men’s singles tournament are:

Here’s what they’ve got going for them astrologically:

The new chart puts Venus in Taurus conjunct the Midheaven and Djokovic’s best year was 2011 when Jupiter in Taurus transited both Venus and the Midheaven (success point) in his chart. This coincided with his domination of the Grand Slams when he won Wimbledon 2011, US Open 2011 and the Australian Open 2012 back to back.]

Re. Wimbledon. Mars is the competitive planet and in Djokovic’s chart, Mars is at 0 Cancer 49. This is significant as Jupiter, the success planet, enters Cancer on June 26 2013 and transits his natal Mars during the competition. The Midheaven of the chart showing the start of Wimbledon 2013 (June 24 2013, 1:00pm, Wimbledon) is 2 Cancer 23 with the Sun in Cancer and Jupiter in Gemini straddling the Midheaven. In the Wimbledon final chart (July 7 2013, 2:00pm, Wimbledon), Jupiter is at this same point in the heavens, 2 Cancer 37. Both charts highlight 2 Cancer and Djokovic’ Mars at 0 Cancer 49 is close enough to this point to be significant.

My only concern with the astrology for Djokovic is that Mars is in fall in Cancer, i.e. it’s weakened and he has a Saturn transit opposite Venus, his career planet, but Jupiter conjunct Mars, the winning planet has to be a strong testimonial, even though it’s separating away from it.

Andy Murray has had some brilliant astrology over the last year which isn’t surprising as in September 2012 he became the first Brit to win a Grand Slam since Fred Perry in 1936 beating Djokovic in the final of the US Open. He also reached the final of Wimbledon in 2012 but astrologically was pipped at the post as lucky Jupiter was closer to Federer’s Midheaven of 6 Gemini 09 than Murray’s Midheaven of 7 Gemini 46 (they were both finalists). It was a close shave.

Earlier this year, Murray was unlucky to be injured just before the French Open as Jupiter was very closely conjunct his Mars at 26 Gemini on the day of the final but he’s come back fighting winning the title at Queens, often thought of as the precursor to Wimbledon. Jupiter remains in his 10th house that rules career success until September 2013 and in addition Mars, the winning planet, is in Gemini during the Wimbledon tournament and Murray has his Mars return, which takes place approximately every two years, on the day of the final. He’s going to want this one badly and will be there or thereabouts.

Roger Federer is the Wimbledon reigning champion and he was my prediction to win Wimbledon 2012 thanks to Jupiter conjunct his Midheaven (see also Andy Murray). Federer hasn’t had the best start to 2013 although he has just won the Gerry Weber Open on June 16 2013. As with Murray’s chart, Jupiter remains in his 10th house of career success until the end of August 2013. Venus in the Wimbledon final chart is at 11 Leo 55 close to Federer’s own career planet, Mercury at 13 Leo 28 but the Ascendant degree in this chart is 21 Libra 28 and very close to Federer’s natal Pluto.

Federer is always one of the most-favoured players at Wimbledon, much loved by the crowd, and the Venus transit conjunct Mercury shows his popularity. However, I have to say the Ascendant/Pluto connection in the final chart makes me think that Federer won’t be there as Pluto rules absence or loss. If he’s not in the final, I wonder whether Jupiter leaving his 10th house and transiting conjunct his Mars in Cancer (August 2013) may be the announcement that he’s retiring, at least from the major tournaments. Mars is square Pluto in his own chart and Mars rules his 3rd house of communication. I may be wrong and I know that this won’t be a popular prediction but time will tell.

Ferrer is a Sun Aries which gives him the drive to be competitive and a winner and on June 26 2013, he has Uranus transiting conjunct his Sun. This transit is about expecting the unexpected and it could prove to be a shock result for Ferrer, swinging either way. Born on a Sun-Mars opposition, Pluto is closely square his natal planet Mars at 9 Libra throughout the tournament. This may give him extra grit and determination but as Pluto is the wipe out planet, I don’t expect him to do especially well although without a birth time it’s hard to give an accurate prediction.

[n.b Nadal also now has a new birth time (!) and this is confirmed from his birth certificate. The birth time that was originally given was 7:15pm. Nadal is still a Scorpio ASC (of course – intense, steely determination) but this puts Pluto on his Ascendant, intensifying the Scorpio obsessive nature, and gives him a Leo Midheaven so the Sun in Gemini is his ruling planet. As Gemini rules the hands and tennis is a racquet sport, this is the sign that I associate most closely with tennis.]

OK, I have to admit it, Nadal’s astrology is baffling me. How do you come back after a long injury, go from strength to strength in 2013, beat Federer in the Italian Open final and beat Djokovic in another epic 5 set final at the French Open all with Saturn conjunct your Ascendant! Admittedly Saturn did retreat away from Nadal’s Ascendant in May when he won the French Open but only to bump into Pluto in Scorpio in his chart. Saturn’s meant to slow you down but somehow for Nadal with Pluto conjunct his Scorpio Ascendant, he’s turned into Superman! I am amazed and wonder how long he can keep going without his knee injury (Saturn rules bones/joints) flaring up again. He’s proving to be bionic.

Re. his Wimbledon chances: Jupiter has moved away from his Mercury in Gemini (the conjunction was exact on the day of the French Open final propelling him to victory) and makes no other major connections until it reaches his Venus at 15 Cancer 40 in September 2013.However, the Sun on the day of the final at 15 Cancer 34 is very closely conjunct his Venus and this year his progressed Venus conjuncts his Midheaven (exact on August 5 2013). This is only effective with the new birth time and does suggest that Nadal is the ‘Comeback Kid’.

The day before Wimbledon begins Saturn is conjunct Nadal’s natal Pluto which feels heavy but you just can’t count him out. He has a mix of brilliant astrology and challenging astrology throughout the year and so far in 2013 he’s proved to be a consistent player. Again if he stays injury-free, he’s got to be a strong contender for the title.

Berdych is a Sun Virgo and with both the dexterous planet Mercury plus action planet Mars in Virgo, he’s a strategist, a thinker and has great hand-eye co-ordination. His chart lacks fighting spirit for me and again with no birth time, it’s harder to make a prediction but there’s no astrology that stands out for Berdych during the Wimbledon tournament.

Tsonga is another Sun Aries, the fighter of the zodiac, and with a stubborn Mars in Taurus opposite Saturn natally, this adds grit and determination to his competitive spirit. Saturn is at the apex of his chart which lends commitment and status but can also bring self-doubt. Tsonga’s been playing well so far this year and with the Cancer planets, including Jupiter, moving through his 5th house, he may have a lucky run at Wimbledon. However, there’s no astrology that leaps off the page to say it’s his title.

Del Potro is a Sun Libra and is born on a Sun/Mars opposition with a strong competitive Mars in Aries. He won the US Open in 2009 making him the only man to take a Grand Slam away from the big four (Djokovic, Murray, Federer, Nadal) since 2005. This year he has his Sun progressed conjunct Mercury which must prove favourable for his tennis playing, as Mercury is fleet-footed. Again as I have no birth time, there’s nothing else for me that jumps out from his chart to suggest a Wimbledon win.

I have also looked at solar returns and lunar returns for the top four, i.e. Djokovic, Murray, Federer, Nadal and again mixed messages for Djokovic. Saturn is conjunct the Ascendant of his solar return but he has a fantastic lunar return beginning June 29 2013 with the Sun and Jupiter conjunct the Midheaven. This plus Jupiter conjunct his Mars is why I’m choosing Novak Djokovic as my Wimbledon winner 2013. I should just add that grass isn’t his favourite surface to play on so I suspect it will be a tough competition for him (Saturn opposite Venus/Saturn conjunct Ascendant of his solar return?) but he’s already proved that he can win at Wimbledon and I believe he will do so again.