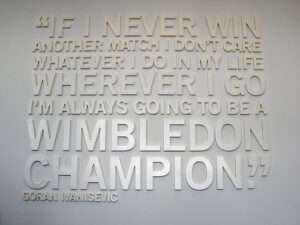 [Originally posted in March 2012, I am re-posting this blog on June 25th 2012, the first day of the Wimbledon fortnight. Can Roger Federer win his 7th Wimbledon title, equalling Pete Sampras’ record?

Check out all the comments, especially about the psychic who predicted Nadal to win the French Open, which of course came true.This has been the most popular blog over the last few months and a lot of people are obviously passionate about their favourite tennis player. Bring on Wimbledon 2013!]

When a good friend and avid tennis fan, Bianca Tait, challenged me to predict the men’s winner of Wimbledon 2012 on her blog post The One And Only Roger Federer, my immediate response was, “Game On!”

I’m an astrologer who loves sports predictions and over the next few months, you’ll hear more from me on how to back a winner at the Grand National and how to predict a key football game using astrology, as the new sporting season gets underway.

The birthdates of the current top four men’s seeds are:

The first thing you may notice is two Geminis in the top four and Gemini’s a popular Sun Sign amongst tennis players. Bjorn Borg (6 June), Steffi Graf (14 June), Venus Williams (17 June) and Anna Kournikova (7 June), to name but a few. Gemini rules the hands and you need lightning reaction and dexterity to be an ace tennis player.

Our local hero, Andy Murray is a Taurus and I did have a bet on him to win Wimbledon last year, as Jupiter, planet of opportunity, moved in to Taurus early June 2011 where it’s remained since then. He didn’t win but 2011 was his best year yet. It was the Geminis, Novak Djokovic and Rafael Nadal, who slogged it out in the final. They both have key planets in Taurus; Rafael has the Moon at 0 Taurus and Novak has Venus at 6 Taurus, so Jupiter at 5 Taurus on the day of the final helped them flourish, especially Djokovic who won Wimbledon 2011.

So what about 2012? Who stands the best chance of lifting the Wimbledon men’s singles final trophy? My first instinct was to hand it to a Gemini. Jupiter leaves Taurus on 11th June 2012 and moves in to Gemini so it’s their turn to shine – again! In addition, Neptune’s move in to Pisces on 3rd February 2012 puts Neptune, planet of fame and glamour, in Gemini’s 10th house of success and the Oscars proved that Geminis are already strutting their stuff this year (Jean Dujardin (19 June) and Octavia Spencer (25 May) both went home clutching little gold statuettes).

The men’s final takes place on 8th July 2012 and on the day, lucky Jupiter is at 6 Gemini. This is where astrology’s premise of “As Above So Below” comes into play. Who’s in tune with the Zeitgeist and whose destiny is in sync with the movement of the planets?

Novak’s Sun is at 1 Gemini and Rafael’s Sun is at 13 Gemini, so Jupiter falls inbetween the two. Andy Murray gets in on the Gemini act with his Mercury at 4 Gemini but what do we find when we look at Roger Federer’s chart? His Midheaven point, the highest point of the chart which symbolises success, is at 6 Gemini and Jupiter will be slap bang at the top of his chart on the day of the men’s Wimbledon final.

Is this a fitting symbol for holding up the Wimbledon trophy? I think it is. As long as he can avoid injury, this is glorious symbolism for success so my money’s on Roger Federer, the oldest of the four seeds, to pull one more Wimbledon win out of the bag. No-one will be more delighted than Bianca.