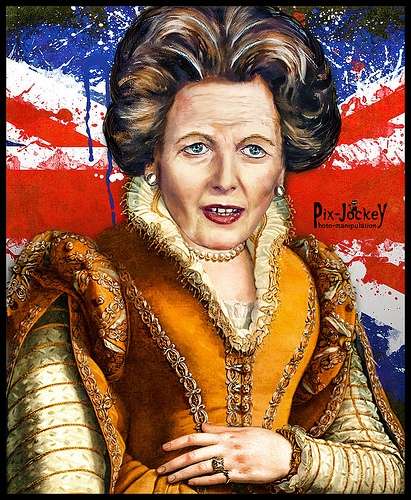 The Lady Is Not For Turning

The big news last week was the death of Baroness Thatcher, the UK’s only female Prime Minister. In death as in life she has evoked extraordinary passion and outpourings of emotion, dividing the nation once again in extremes of love and hate. Her funeral takes place this Wednesday, 17th April, in London.

Thatcher has a classic birth chart: Sun Libra, the strategist and diplomat, Saturn conjunct a Scorpio Ascendant, the power-seeking authority figure, and a proud, regal Moon in Leo close to the Midheaven.

Her ruling planet is Mars in Libra and this is where you find the symbolism for the ‘iron fist in a velvet glove’ and the raging debate about Thatcher and her portrayal of masculine and/or feminine qualities. Mars, the male planet, rules iron in the sign of Libra, linked to Venus, the female planet, hence the Iron Lady. Only last week in parliament, actress turned labour MP, Glenda Jackson, reawakened the controversy when she said of Thatcher, “A woman? Not on my terms”.

Thatcher’s Mars is at 9 Libra 28 and if you know your astrology this placement of Mars, the fighting planet, reignites the ongoing Uranus-Pluto square, symbol of riots and revolution, the continuing protest against governments, corporations and plutocracy. This is the haves v. the have nots in action, out with the old and in with the new.

The Lady is not for turning

On the day Thatcher died, Uranus was at 9 Aries 05 almost exactly opposite her Mars and a few days later Pluto stationed retrograde at 11 Capricorn 35 square her Mars. Pluto, God of the Underworld, in conservative Capricorn showed in the world as a ‘significant death’ and Pluto turning on its axis brought to mind one of her most famous quotes, ‘the lady is not for turning’.

This week we find a battle-hungry Sun/Mars conjunction in Aries, exact at 00:20 GMT on Thursday 18th, i.e. at the culmination of the day of Thatcher’s funeral. Will she go quietly or will there be trouble? I suspect many of us already know that the controversy around her funeral will trigger more unrest.

On a personal level, the Sun/Mars conjunction in Aries and Mercury in Aries conjunct Uranus and square Pluto on the 20th and 21st respectively are the last blast of the dynamic, fiery Aries energy. Here’s your chance to make your mark and assert your authority. Arguments are inevitable but at least ensure you steer them towards a constructive purpose rather than lashing out.

A planetary shift begins today Monday 15th with Venus, planet of love and beauty, moving into earthy, fertile, sensual Taurus. Slow down the pace of life, smell the flowers and savour the experience. Let your inner earth mother out to play, whether you feel a desire to cook, garden, be a home-maker or however else you care for and nurture yourself and others. The Venus/Neptune sextile on Friday 19th feels romantic and creative with the promise of new love.

The Sun joins Venus in Taurus on Friday 19th followed by Mars on Saturday 20th. Taurus is the sign that follows on from the initiating energy of Aries. The seeds are sown, now to look after them, water them & give them light and encourage them to grow. Taurus rules money and common sense and a keen business head creates results. Make plans and enlist the support of others to ensure you complete what you’ve started.

Next week brings an eclipse in Scorpio so even though we’re moving into more settled Taurus territory, change is still very much on the horizon and, in the world at large, the after-effects of Thatcher’s funeral will continue to resonate. Tune in next week to find out what the eclipse energy means for you.