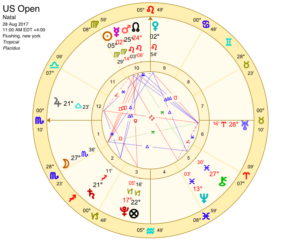 Update: Rafa Nadal won his 16th Grand Slam beating Kevin Anderson in the final. It was a tournament of surprises with a lot of big names out before the tennis began due to injury, including Djokovic, Wawrinka (reigning champion) and Murray.

The women’s tournament brought a new name to the trophy, Sloane Stephens, ranked 83 at the start. Looking again at the chart of the tournament, you can see the surprise female winner – Uranus conjunct DSC (other); ruler of DSC, Venus, conjunct Midheaven (success point).

For the men, Mars was strongest, ruler ASC (favourite) in the 10th house (success) conjunct the North Node. Plus Mercury retrograde in the 10th, and part way through the tournament I wondered whether this symbolised a returning champion.

Rafa’s key astrology was eclipse astrology as the recent Solar Eclipse fell at 28 Leo close to his Midheaven at 0 Virgo. He had both Mars and Mercury going over that sensitive point in his chart. Eclipses can bring shocks and I didn’t expect it to bring good news for him but on the day of the final Mercury, his career planet, was exactly conjunct his Midheaven (career/success point) and direct once again and he couldn’t be beaten. Well done, Rafa, you’ve made a lot of your fans very happy.

I shall start by writing that my best predictions rarely happen at the US Open. My last correct prediction was Nadal’s win back in 2013!

I shall continue by writing that this is going to be a super quick prediction because I am in the midst of a major writing project which I shall be announcing at the end of the month.

Having said that, I know these astrology/tennis predictions are popular and I know a lot of you love to comment. This time around I shall be extremely grateful to those of you who know your astrology and can let me know what I’ve missed! Please do leap in.

To all of you, please play nicely throughout the tournament on the comments section. I shall delete any comments which don’t add to the astrology/tennis/camaraderie feel of the blog. Now on with the predictions…

As always I shall start with the tournament chart which is shown above. Yet again at the US Open, communication planet Mercury is retrograde which isn’t exactly helpful as things remain hidden whilst Mercury’s on go slow and new information often comes to light once Mercury turns direct.

That date is Tuesday 5th September, not long before the tournament completes on Sunday 10th September. As shown in the past, this can turn around a player’s fortunes, especially if Mercury’s degree of direction, 28 Leo, is strong in a player’s chart (n.b. this was also the degree of the recent Great American Solar Eclipse on August 21st).

Looking at the chart for the tournament, it’s clear that everything is wide open at the US Open. Uranus, the planet that brings surprises and is linked to the outsider, is conjunct the Descendant, the ‘other’ in astrology, i.e. not the favourite. Plus the planet that rules the Descendant, the ‘other’ is Venus and Venus is at 2 degrees Leo conjunct the Leo Midheaven, the success point of the chart. So the chart suggests we’re looking at an unexpected victor, a surprise win.

You want surprises? We already have them with the list of injuries and players out before the event begins, including Djokovic, Wawrinka (reigning champion), Raonic and Nishikori. Wow! That is quite momentous, plus Andy Murray enters the competition with a sore hip. This tournament might be more about who can survive uninjured than who’s going to win!

The other factor to note in the tournament chart is that Mars, the chart ruler, is at 25 Leo conjunct the North Node, a destiny point in astrology, at 24 Leo. So players with 24/25 Leo prominent in their charts may be ones to watch.

Let’s take a look at the players’ charts, those who are left anyway…

Rafa is the no. 1 seed for the US Open and the tournament chart doesn’t suggest that the favourite will win. However, if his time of birth is correct (and those of us who use the astrology for his tennis wins believe it is), his Midheaven, success point, at 0 Virgo is in on the action during the tournament.

Mercury, his career planet, will go back and forth over that point and on the day of the final, Mercury is at 0 Virgo 30, very close to the degree of his Midheaven. It’s intriguing astrology and probably best to note what happens when Mercury turns direct on Tuesday 5th September.

Andy is the no. 2 seed but enters the tournament with a sore hip that troubled him at Wimbledon. If the media’s correct, it’s still something of an issue. His astrology doesn’t look great for the US Open. He has Saturn, which is often linked to injury, almost exactly conjunct his natal Moon as the tournament begins, which feels heavy. Plus Uranus is heading back to his natal Venus at 27 Aries. So again a theme of surprises but it doesn’t feel glowing for Andy.

The one helpful factor is that lucky Jupiter is currently sextile Saturn so it’s also picking up his natal Moon/Saturn conjunction. Yet Saturn is the stronger transit of the two. n.b. Saturn was bad news for Andy – he was out before he hit a ball!

Roger is the no. 3 seed and the stunning astrology which propelled him to incredible wins this year at the Australian Open and Wimbledon is now fading. Yet Roger’s astrology always seems to have a nod to something special. Look at the chart for the opening of the tournament.

Venus is at 2 Leo conjunct the Leo Midheaven (Roger is a Sun Leo) and Roger’s North Node, the destiny point, is at 0 Leo 54, so close enough to be picked out by that Venus. He’s not the favourite either – the chart points to a non-favourite winning. Also the Moon at 27 Scorpio in the tournament chart is conjunct his planet of surprises Uranus at 26 Scorpio. Surely not another win! It’s not amazing astrology but with Roger you never know.

He also has a major transit of Jupiter conjunct his Pluto at 21 Libra 56. This seems to be about money/wealth and isn’t necessarily a strong symbol for another win.

I know you’ll be asking what order I would put the top 3 in depending on their astrology. My hunch is that it would be Roger 1, Rafa 2, Andy 3.

However, the tournament chart seems to suggest that someone new might win the US Open this year. Here are the other players to note:

The time of birth for Alexander is not definite but if it is correct, it’s interesting astrology for him. His Sun is at 0 Taurus 48 conjunct the Descendant of the tournament chart, the surprise ‘other’ winner perhaps? Plus the 11pm time makes his Ascendant 27 Scorpio 26 and as the tournament begins, the Moon is at 27 Scorpio 36 so very close. In addition, Alexander’s ruling planet Mars is at 17 Virgo up near the top of his chart and Pluto makes an exact trine aspect to it during the tournament. Nice astrology. He’s also one of the hot favourites now with so many of the big names out. Definitely one to watch.

Alexander’s younger brother, Mischa, also has intriguing astrology. His birthday was one day after the Solar Eclipse at 28 Leo, so he has a triple conjunction of Venus, Sun, Mars at 27, 28 and 29 Leo respectively. Plus his natal Mercury is at 0 Virgo and that’s where Mercury will be on the day of the final. He’s not a favourite by any means but his astrology leaps out.

Two Sun Libras both with lucky Jupiter honing in on key planets in their charts. Jupiter is at 21 Libra as the tournament begins and 23 Libra on the day of the final. Neither transit is close enough to be truly exciting but Sam has Venus at 26 Libra and Marin has Mercury, his career planet, at 27 Libra.

A Sun Virgo, Dominic has his birthday during the tournament. He has Venus at 7 Leo, close to the Midheaven of the tournament chart and he’s recently had his Jupiter Return (Jupiter at 15 Libra). Again, nice astrology although not outstanding.

Another Sun Virgo, Tomas has Venus at 24 Leo (n.b. what I mentioned about Mars/North Node at 24/25 Leo above). Plus he has his natal Mars at 4 Virgo, close to where the Sun is at the start of the tournament. With no time of birth, we can’t tell more about what his natal planets rule in his chart.

The Frenchman is yet another Sun Virgo with personal planets being triggered by the Sun in Virgo as the tournament begins. More interesting for Monfils, if his time of birth is correct, is his Midheaven at 26 Aries 36, so surprise planet Uranus is heading back towards it during the tournament.

Another Frenchman, this time a Sun Aries, Jo-Wilfried has had a long and exciting tennis career. His Sun is at 27 Aries 01 so Uranus is going back over his Sun one more time. It’s not exact but it’s within 1 degree orb by the time of the final.

I’m not convinced by the astrology of the Top 3 and I think it will be a surprise winner this time. If that’s the case, who it will be is not clear but I’ve made a few suggestions for you above. Happy Tennis!