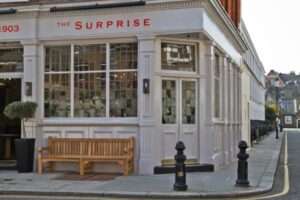 I’ve long considered Uranus one of the most intriguing planets. For starters, you can pronounce it two ways, one of which always raises a smile.

More significantly, Uranus transits tend to play out to the exact date, which is unusual as this is one of the slower-moving planets, even if it does have an erratic orbit.

Plus, Uranus is about bolt-out-of-the-blue experiences, those things in life you didn’t see coming. Uranus transits coincide with change and the unexpected. They tap you into the strange workings of time and the universe, eliciting new opportunities and sometimes drastically altering your world view.

Take Tuesday’s jaunt up to London when transiting Uranus at 3 degrees 45 Taurus was exactly opposite my natal Sun Scorpio. I was meeting Christina, my podcast partner, to record our Gemini podcast. We chose the beautiful gardens of Chelsea Physic Garden as it was a lovely sunny day and London is, after all, a Gemini city.

First synchronicity. We met at 12:30 and the cafe in the gardens was fully booked until 2:30pm. Both starving, we asked where we could eat locally. The nearest pub was ‘The Surprise‘. It seemed apt for a day when you’re experiencing a major Uranus transit, the planet of surprises. The pub turned out to be a real gem and the food was great.

Christina & I were talking about Gemini in the pub, the star sign most closely linked to words & reportage, newspapers & the media. I nip to the loo and on the wall there are framed front pages of old newspapers.

One described J F Kennedy’s assassination (Kennedy was a Sun Gemini), another Beatle Mania (we’d only just mentioned that Paul McCartney, who wrote most of the Beatles songs, was a Sun Gemini). Plus, I turned the corner to be confronted by a huge photo of Marilyn Monroe (yes, you guessed it, another Sun Gemini). 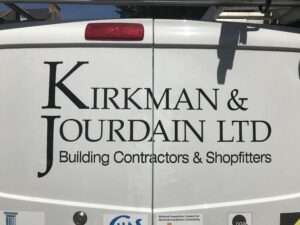 One other mention about our jaunt to the pub. We walked past a van bearing my name (see pic on right). I don’t run into many Kirkman’s, so that seemed a coincidence too.

The best (or weirdest) synchronicity came in the afternoon after our podcast recording was complete.

Wandering around the gardens, I was telling Christina that a certain Gemini friend of mine would be able to tell us all about the wonderful plants and flowers. My friend is a tour guide & linguist (typical Gemini careers) and one of her specialities is garden tours.

Christina asked whether she gave talks in the Chelsea Physic Garden and I replied that most of her tours were out of London. Two minutes later, we turn a corner and who do we see in front of us? Yup, my Gemini tour guide friend. She was as surprised to see me as I was her!

Even the end of the day was a little weird as Christina & I miscommunicated on our way out. I nipped to the loo (again) and thought she was waiting in the shop. I couldn’t find her in the shop. So, I went out of the exit and the door shut behind me – no way back in.

I’d obviously missed her but then I saw my bus appear to take me to the station so I decided to leap on it. The two of us were split apart in another odd occurrence (Uranus is the planet of splits). A strange way to end a lovely day.

Obviously, Uranus transits mean different things. However, Tuesday’s experience confirmed to me that Uranus is the planet of surprises and synchronicity. Uranus’ orbit is erratic and it works in our lives in unexpected and coincidental ways.

When Uranus transits oppose or conjunct your Sun sign, the planetary body which represents the ego, your essence, it can feel disorienting. Also, whatever you do, don’t hold on rigidly or tightly to plans, because they’re unlikely to work out.

Perhaps, it was Uranus in play during the start of my journey into London. There was an incident at Clapham Junction and all the trains were delayed. I ended up running back and forth between platforms at Guildford, trying to work out which was the best train to get on.

In the end, I found myself on the fast train that I’d got off 20 minutes earlier in search of a better train to my destination. Uranus – it takes you here, there and everywhere and you can almost always guarantee a diversion! A bit like the diagram below 🙂 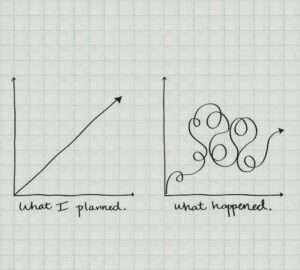