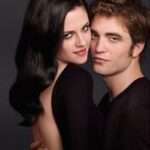 Robert Pattinson (born May 13 1986) and Kristen Stewart (born April 9 1990) shot to fame in The Twilight Saga, the four books written by Stephanie Meyer which have been a mega hit in prose and film over the last few years. The two stars who play the vampire, Edward Cullen, and his beloved human, Bella Swan, fall in love on screen and they have had an on-off relationship off screen as well.

Their astrology is fascinating as they are both born with almost exactly the same Ascendant at 14 degrees Cancer so they share the same ruling planet, the Moon, which governs the night and all things lunar and witchy, perfect for two stars of a film about vampires.

The Ascendant is the sign that is rising on the horizon when you are born and with the Sun and Moon, it plays a key part in determining personality and how you come across to other people. The Ascendant/Descendant axis cuts across the circle of the birth chart and, leading on from the cosmic marriage, has an important role to play in love compatibility. When these three components, Sun, Moon and Ascendant, interlink between two charts, it suggests a deep soul connection.

Even more fascinating is the planet Neptune in both their charts. Neptune is the planet of dreams and paranormal activity and Robert Pattinson has the Moon opposite Neptune whilst Kristen Stewart has the Moon square Neptune. In both cases, this suggests an intuitive, susceptible personality with a vivid imagination. The ability to escape in to an otherworldly romantic existence through their onscreen roles fits this symbolism perfectly. They were destined to play their iconic screen roles and to fall deeply madly in love.