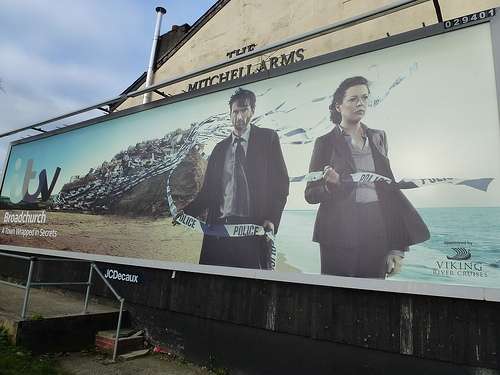 Broadchurch – A Town Wrapped In Secrets

Traditionally eclipses were feared which makes sense as people in ancient times must have thought the world was coming to an end when day inexplicably turned to night. An eclipse remains an awesome sight as it involves the two great ‘lights’, the King and Queen of the heavens, the Sun and Moon.

Eclipse symbolism is shadowy and hidden and eclipses are powerful events in astrology, especially when the eclipse degree – Thursday’s eclipse falls at 5 Scorpio 46 – connects closely with planets in your own chart.

What does it mean?

So what does this week’s eclipse mean for you? An understanding of the signs of the zodiac helps and at this eclipse, the Sun is in Taurus and the Moon in Scorpio. A Scorpio eclipse intensifies the hidden nature of this event as Scorpio rules the 8th house in astrology which represents the subconscious, buried emotions and motivations, secrets and subterfuge. One description of a lunar eclipse is something hidden which is brought to light, which is what happened on TV last night.

If you live in the UK, like me you may have been glued to the television over the last 8 weeks watching a brilliant detective series, Broadchurch, and last night’s episode was the finale which revealed ‘who killed Danny’. I was as gripped as the other 9 million people who’ve been waiting to find out the killer’s identity which has been kept a huge secret. The actors involved didn’t know whodunnit’ and apparently only 29 people in the whole country had access to this vital information. It’s been a majestic murder mystery played out infront of a nation.

This all fits beautifully with the Scorpio theme of this week’s eclipse and perfect timing for the final revelation of Broadchurch, especially as Scorpio is the sign associated with crime, the underworld and primal urges and desire. I won’t say anymore about the series incase you still need to catch up but this week pay close attention to your own hidden desires or secrets and be a super sleuth and detective to work out if someone close to you is withholding information. The eclipse may reveal more.

The Taurus/Scorpio axis pits the physical and tangible realm of Taurus against the metaphysical and intangible world of Scorpio. In my experience, a Scorpio eclipse challenges you to question your dependence on money, possessions, even love and asks whether you can seek out a higher meaning, to look for the spiritual aspect of your life. It’s materialism v. idealism, attachment v. non-attachment. You may find that you have to make a tough choice; you can have this, but you can’t have the other; what do you need, but what can you do without?

This week’s eclipse also involves a Mars/Saturn opposition; Mars in Taurus next to the Sun and Saturn in Scorpio close to the Moon. Mars represents action, drive, initiative and Saturn represents limitation, blocks and authority.  Working together they add grit and determination but they can combine to stop you in your tracks when you’re confronted by denial either via external forces, a second party or your own fear.

This is a personal eclipse for me as it connects with my own Sun in Scorpio and my partner’s Sun in Scorpio. The other half has started a new job which is great but it involves long hours, hard work and we’re both having to sacrifice our freedom and readjust to more time spent apart. This fits with the Taurus/Scorpio theme of the eclipse as well as the Mars/Saturn opposition.

Work brings money and security (Taurus) but it’s not enough without a deeper purpose (Scorpio) to remind us both of the reason why we’re making this choice. The hard graft involved and the limitations and challenges that need to be faced fit the Mars/Saturn opposition. An understanding of the current astrology helps put everyday life into perspective and real events help bring the astrology to life.