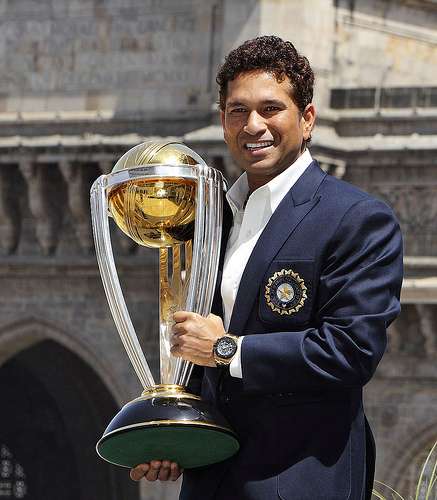 Update: May 7th 2014. Since writing this article, a revised time of birth has emerged for Sachin Tendulkar of 1:00pm. This isn’t confirmed from his birth certificate but from memory. The new chart has a Leo Ascendant and the Sun at 3 Taurus is conjunct a dignified Venus at 7 Taurus ruling the Midheaven which is 9 Taurus. This would be lovely if it was confirmed as the correct time and it would show why he won the hearts of the Indian nation. The Sun/Venus conjunction in Taurus elevates him to ‘Godlike’ status loved and adored by his people.

When I was driving up to London on Sunday a programme came on Radio 4 about the Indian cricketer Sachin Tendulkar. Not knowing much about him my first reaction was to change stations but I decided to hang in there to find out a little more about India’s cricketing legend who recently retired leaving it’s country in mourning.

If like me you know little or nothing about Sachin Tendulkar, in brief he’s played test cricket for India for 24 years, he holds about every batting record worth owning in the game, his nickname is ‘Little Master’ and he is worshipped by the Indian people.  As one fan was quoted as saying:

“Cricket is India’s religion and Sachin is it’s God”

It turned out to be a fascinating 15 minute profile and I found myself trying to guess Sachin’s star sign from what was being said about the man. It was fairly obvious that he was an earth sign as different contributors to the  programme described him as ‘unshowy’, ‘a reticent man, a family man’, ‘not one to lead people’, ‘a team player’, ‘never one to argue with the umpire’ and it was even suggested that ‘yes, he may come across as a little bit boring’. Other qualities which described him were ‘dignity, poise, self possession and a zen like calm’.

I was convinced he was a Virgo as he sounded modest and a rather lovely man who was willing to serve his country through his role as flagbearer of the Indian cricket team. In addition, it was suggested that he’d played on a couple years more than he should have and after almost a quarter of century in the game, he’s the only cricketer to have played 200 test matches. Quite a feat and another indication that he was an earth sign, the element of longevity, that continues on relentlessly.

Having now drawn up Sachin’s chart, it turns out he’s not a Sun Virgo but earth is the dominant element with the Sun in Taurus, the Moon in Capricorn and a Virgo Ascendant (see chart below). An earth sign through and through and Taurus is the most enduring signs of the earth element. 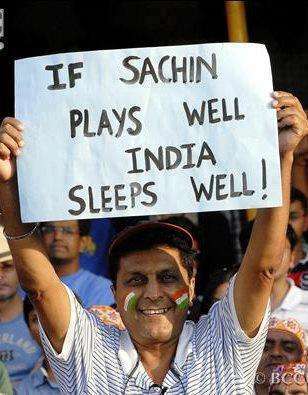 The Burden of a Billion People

What also intrigued me about the brief profile of this revered Indian cricketer was the number of times that people mentioned the ‘colossal burden’ Sachin had to carry in his elevated role. It was said that when he played well, he turned the country’s ‘sadness into happiness’ and that he ‘carried the burden of a billion people’. A poem written about him was quoted as saying that when Sachin walks on to the cricket pitch, ‘a whole nation, tatters and all, marches with him to the battle arena’. The poster on the left says it all.

Looking to locate his God-like status in the chart, there are a few factors in his chart that immediately jump out. Firstly there’s the elevated Saturn in Gemini in the 9th house conjunct the Part of Fortune marking him as a Great Teacher.

This Saturn is part of a Grand Air Trine with Mars in Aquarius in the 5th house of competition and Uranus in Libra in the 1st house of personality. Grand Trines at their best bestow good fortune and in Sachin’s chart it links his image/personality (1st) with his sport (5th) and his mission in life or destiny (9th).

In traditional astrology, Saturn was God of Fate and in the profile it was suggested that Sachin had ‘been given a gift’ and that his destiny was ‘written in the stars’. Saturn is the planet that bestows authority and responsibility yet at its heaviest can symbolise a burden. The Grand Trine in air unites people, it’s the element of interaction, networks and community and not through his voice (Saturn can negate what it touches and in Sachin’s chart Saturn is in Gemini, the sign of communication and the voice) but his dignified presence and his destiny, Sachin united a country.

Sachin’s Midheaven is Gemini, a sign that I often associate with sports which use the hands, e.g. tennis & cricket, as this is the body part ruled by Gemini. The Midheaven is your vocation in life and both this success point of the chart plus his Virgo Ascendant are ruled by one planet, Mercury in speedy Aries sextile to Jupiter. This too elevates Sachin’s position in life. It’s a close sextile and Jupiter bestows good fortune and in mythology Jupiter was King of the Gods. Mercury in the 7th house of relationships is also trine to Neptune in the 3rd house of communication and again this symbolises that in his cricketing role Sachin ‘spoke’ to and connected with the people of India. They could identify with him.

My home, my country

Finally, Sachin’s north node and karmic point of the chart is in his 4th house of family and his home. This confirms that his destiny is not only linked with those close to him but to his wider home, his country, India. At the end of the profile a historian suggested that in ‘carrying the burden of captaining India, a huge and diverse country’ Sachin’s role was ‘harder than being Prime Minister’. In a country where cricket is it’s religion, it’s no easy job being it’s God and yet Sachin always bore his burden with dignity. [n.b. time of birth for Sachin’s chart is unconfirmed yet it’s the one most commonly used & the Virgo Ascendant fits him well]