Last week there was a grand earth trine of planets in the heavens, including the two stars of the show, Venus and Jupiter, shining bright in the night sky. The earth signs are Taurus, Virgo and Capricorn.

This was an amazing opportunity to be inspired and be creative, especially around love and money, and to lay strong foundations for the future. Earth signs tend to be slow burners: the hard work and commitment you put in now brings rewards further down the line.

I wasn’t surprised to find Prince Harry in the news as I tweeted this week that he almost has his own grand earth trine going on. His Sun is in Virgo, his Moon is in Taurus and he has a Capricorn Ascendant so his earth planets are in tune with the spirit of the time.

Harry’s a down-to-earth lad even though he’s a prince and seems to enjoy going out on the town and having a laugh. The video below shows him fooling around with the world’s fastest man, Usain Bolt, on his recent 10 day tour to the Caribbean and Brazil.

On the day of the Venus/Jupiter conjunction, I read an interview which said that Harry wishes he was “normal” and suggested his royal role put women off. The title read “I can’t find love”. In Harry’s chart, it’s the Moon which is his relationship planet. When you have the Moon in Taurus, you crave emotional stability and thrive in an affectionate relationship.

Now the good news for Harry is that both Venus and Jupiter, which represent love and abundance, are also in Taurus. At the end of March, Venus is at the same point in the heavens as Harry’s Moon and in early May Jupiter connects with his Moon. This is wonderful symbolism for meeting someone and falling in love.

Harry’s ex-girlfriend, Chelsy Davy (b. Oct 13 1985), who he dated for six years until 2010 is a Libran and her Sun Libra is at the same point in the heavens as Harry’s Venus in Libra. This is a loving connection and with Harry’s feminine planets, the Moon and Venus in Taurus and Libra respectively, it shows he has a romantic side. Both Taurus and Libra are ruled by Venus, and both are perfect star signs for his ideal woman.

He is still only 27 so has plenty of time to meet the woman he wants to marry but let’s see if Venus and Jupiter in Taurus bring someone special his way, (note to Harry, make sure you have special events lined up on 25th March and 5th May. You won’t find love watching TV at home on your own). 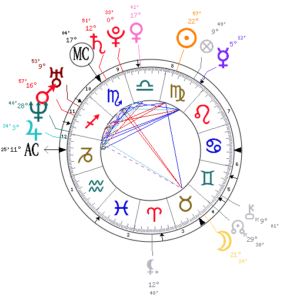