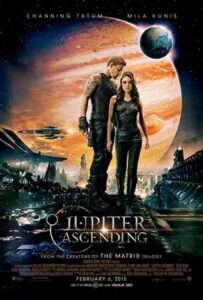 When I was looking for topics to write about early last year I came across a new film to be released entitled Jupiter Ascending starring Mila Kunis as Jupiter Jones.

Now if you’re an astrologer, this is a huge carrot on a stick. Immediate question pops into my brain, ‘so where does Mila Kunis have Jupiter in her chart?’

Satisfyingly, I discovered that (if the birth time is correct), Mila’s Ascendant is Sagittarius, the sign that’s ruled by Jupiter.

In addition, she has a Jupiter-Uranus conjunction in Sagittarius with Uranus close to her Ascendant and Jupiter is being pulled into the Ascendant by its close connection with Uranus.

How fab is that? Jupiter is literally ‘ascending’ in Mila’s natal chart.

The Ascendant is the sign that was rising on the horizon when you were born and a Sagittarius Ascendant means that Jupiter is Mila’s ruling planet. Plus the 1st house represents your name, who you are and here she is playing none other than Jupiter (Jones). It’s gorgeous astrological symbolism.

Plus the blurb about the film states: ‘Jupiter Jones is an unsuspecting, unlucky Earth-born janitor whose genetic structure marks her as royalty and the heir to Earth‘. Jupiter was King of the Gods and in astrology is linked to royalty. Born to play Jupiter? Most definitely.

You can see Mila’s chart below. She was born on August 14th 1983 at 5:00pm in Chernivsti, Ukraine. Her chart is super fiery with six key planets/angles in fire signs. Mila’s Sun is in Leo trine Neptune in Sagittarius and you often see a Sun/Neptune signature in charts of movie stars as Neptune rules the celebrity world of glamour. There’s a deep yearning in your soul when your Sun sign is trine to Neptune, a wish to escape the mundane realm for something more and film is linked to Neptune, the planet of images.

Mila’s natal Mars is loud & proud in Leo; the action planet in the sign of the drama queen and Mars is trine to her lucky Jupiter-Uranus conjunction in Sagittarius. This is the risk-taker, a ‘leap before you look’ planetary combination that adds a pushy element to her nature which pays off.

This side of her character played out when she was cast for the role of Jacqueline in That ’70s Show in 1998. She was only 14 when she auditioned for the role but told the casting staff that she was going to be 18 on her birthday (the required age).  They liked her so much that they cast her nonetheless even when they found out her real age. The show was a hit for Mila in another area as she’s recently had a baby with her partner and co-star from the show, Ashton Kutcher.

I first became aware of Mila Kunis as an actress in the wonderful film Black Swan (2012), where she starred opposite the lead actress, Natalie Portman. Mila’s Moon is in the passionate and dark sign of Scorpio a perfect symbol for her role as Lily in the movie, the embodiment of the Black Swan. The movie is very Scorpionic and a brilliant psychological drama horror film.

Mila is now exploring her natal Jupiter in Sagittarius in her role as Jupiter Jones in Jupiter Ascending (2015). The release date of the film was put back until February 6th 2015 and has had awful reviews so I’m not sure I’ll be watching it at the box office. I might wait until it’s out on DVD instead. 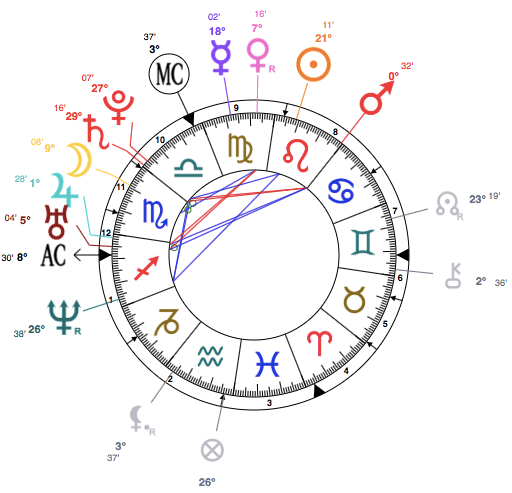 [n.b. the birth time for Mila Kunis comes from Astrotheme.com who are quoting Librarising.com as their source].