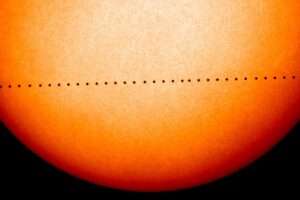 There’s a rare phenomenon in the sky today as the messenger planet Mercury can be seen as a black dot as it moves across the light of the Sun (see image).

Astronomers and stargazers will be leaping up and down in delight and gazing at the sight through their telescopes and special glasses and astrologers and astrology-lovers will be focusing on the symbolism of this exciting event. What does it mean?

To start, here are some basic facts about the communication planet, Mercury and today’s Sun/Mercury union. Mercury’s orbit is never far away from the Sun and Mercury in your natal chart is always one sign before, the same sign or one sign after your Sun sign. For example, if you’re a Sun Scorpio, your Mercury will be in Libra, Scorpio or Sagittarius.

Mercury turns retrograde three times a year for three weeks at a time and this period often coincides with communication problems – Mercury is currently retrograde. Today’s Mercury transit is important for astrologers because the Sun and Mercury are in conjunction. They are both at 19 Taurus.

Today’s Sun/Mercury conjunction on May 9th 2016 is called an inferior conjunction and this can only occur when Mercury is in retrograde motion. It’s the beginning of a new Mercury cycle and on July 7th 2016, the Sun and Mercury will meet again at 16 Cancer, this time when Mercury is in direct motion. This is the superior conjunction. Mercury then completes its current cycle and a new one begins on September 12th 2016.

What does it mean?

Here’s what we can surmise about today’s rare transit. Currently Mercury is looking backward which might link to insights from the past. During retrograde phases there is more focus on the subconscious and it’s a fertile time of learning and evaluation.

Effectively this is Mercury’s hidden phase and yet today Mercury is visible, as a tiny black dot in front of the Sun. Mercury is currently mid-way through its current retrograde phase. Therefore what is being brought forth in your life? What messages are you receiving? Make time to listen to your inner voice. Look out too for synchronicities, nudges from the universe. How are you being guided, what is life telling you?

This is one of those peak times in the year when there’s a swelling of positive planetary energy as today’s Mercury transit takes place on the same day as Jupiter, the planet of opportunity and growth, turns direct in the heavens at 13 Virgo. Jupiter will continue to stride forward in purposeful fashion until it changes signs on September 9th 2016.

Plus tomorrow, May 10th 2016, Venus, the planet of love and money, currently strong in Taurus makes a stunning trine aspect to Jupiter. The two benefics of the heavens, i.e the good guys, coming together at the same time as the Sun and Mercury meet in their epic transit. If ever there was a time to practise the law of attraction, it’s now!

Especially during a period when Mars and Saturn, the malefics in astrology, i.e. the bad guys are combining forces in Sagittarius, there are many people who are more than ready to be delighted by today’s magical occurrences. Look out for breakthroughs in your own life, line up an IMPORTANT meeting or interview and be open and ready for new insights and knowledge. These are exciting times.

If you want to find out more about the astronomy of today’s rare event, here’s a link to an excellent article by Vox.com. The image above is from their page entitled Mercury Transit Watch 2016.