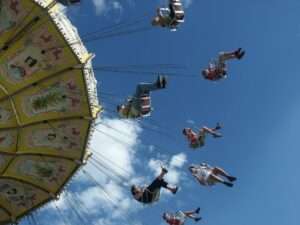 March is a big month in the heavens so here are some top tips on what’s coming up.

Once you understand more about the astrology in the month ahead, you can tune in to the cosmic vibe.

This will help you not only survive but thrive as we navigate one of the liveliest months in 2015.

Hold fast and here’s hoping you enjoy at least some of the ride and don’t spend the whole month with your eyes shut tight! Here’s what’s coming up:

This is magical. Jupiter and Uranus were the Sky Gods in mythology and together they offer an opportunity to break through, to break free. This trine aspect feels expansive and full of hope. It’s brilliant for taking risks and chasing after adventure and new experiences. Watch out for unexpected opportunities that crop up in your life taking you down a different path.

This is the second of three Jupiter-Uranus trines. The first took place on September 25th 2014 and the third takes place on June 22nd 2015. This is the middle one. Jupiter is currently at 14 Leo and Uranus at 14 Aries. If you have planets or angles close to these degrees in any of the three fire signs, Aries, Leo, Sagittarius, you’re in the magical triangle. Make the most of it.

Here’s a link to an article I wrote back in September on the first aspect if you wish to find out more:The Jupiter-Uranus Trine: Breaking Free.

Even though the fire signs, Aries, Leo & Sagittarius, are vying for attention in March, let’s not forget that this is the time of year when Pisces rules and all ‘go-with-the-flow’ fishes enjoy their birthday month. The Sun is in in Pisces until March 20th.

This month’s Full Moon takes place on March 5th and cuts across the Virgo/Pisces axis of the zodiac. The Full Moon is the phase of the moon cycle when the light of the Moon is at its brightest and emotions are heightened. You see things clearly during the Full Moon phase, it’s a time of completion and often the intentions you set at the New Moon two weeks before (last New Moon – February 18th 2015) can manifest and take shape or form.

This Full Moon links in brilliantly to March’s astrological activity because the Moon is at 14 Virgo 50 and the Sun at 14 Pisces 50. If you take a look at the rest of this article, you’ll notice that three of the major planets in the heavens are also very close to this zodiac degree; Uranus at 14 Aries, Jupiter at 14 Leo and Pluto at 15 Capricorn. The Full Moon may give you extra insight into your own personal situation revealing a blind spot or something that you hadn’t previously seen or considered.

Yes, it’s finally here. The 7th and final Uranus-Pluto square. These two mighty Titans have been challenging us on a personal and global level for some years now. Pluto entered Capricorn in 2008, Uranus entered Aries in 2010 and their first clash came in June 2012. By now you might know how this square affects your own chart and what it represents in your own life.

It’s not an easy energy as these are powerful planets; Pluto represents loss, endings, transformation and Uranus represents revolution, change, unpredictability. Therefore it’s no surprise that the Uranus-Pluto square has coincided with dramatic change & upheaval for many individuals and our world. Uranus and Pluto clash at 15 Aries and 15 Capricorn respectively so if you have planets or angles close to these degrees in any of the four cardinal signs, Aries, Cancer, Libra, Capricorn, you’re in the zap zone.

The basic symbolism is ‘out with the old & in with the new’. It’s futile to resist change as wherever Pluto signifies an ending, Uranus is shouting out ‘reinvent yourself’. Plus, Jupiter is positively boosting the Uranus-Pluto square this month so this really is a chance to break free, break through.

I’ve written about the Uranus-Pluto square numerous times since June 2012 but here’s a link to my first article which tells you more about which areas of your chart are affected: The Uranus-Pluto Square: The Year of the Protester.

Venus and Mars, the relationship planets are in Aries this month until the 17th and 31st respectively, and they both link in to the major astrological aspects above. This suggests that other peoples’ lives are intricately connected to your own; what takes place for them has a knock-on effect for you and vice versa.

Mars in Aries is dominant throughout the month, a real powerhouse of energy so watch out for those Aries! They’re rampaging through the zodiac and it’s up to you, Aries, whether you use this energy for the greater good and fight the good fight or to further your own interests. Try not to get into battles for the sake of it though. Your choice.

Venus is the weaker of the two in Aries but she comes into her own on the 17th when she enters Taurus, one of her signs of rulership. This is a much more grounded energy than all the bluster and bravado of the fire signs. You may well be ready for a quieter phase where you can regroup, settle down, adopt a slower pace of life.

Venus in Taurus favours walks in the country, connecting with nature, hands-on activities, such as cooking, gardening, art, massage and allows you to indulge your earth mother side and nurture and nourish children, pets, yourself, the ones you love. Make love not war!

Yes, we’re back in eclipse season and this month there’s the first eclipse of a new cycle. Between now and February 2017, the eclipses cut across the Virgo/Pisces axis of the zodiac so big news for both these signs. Eclipses are game-changers, power points in the heavens.

As with all eclipse cycles, the eclipses begin at the end of the signs and work their way backwards so this eclipse falls at 29 Pisces. This is significant as it’s not only the last degree of Pisces (each sign has 30 degrees) but the last degree of the zodiac. On the same date, the Sun & Moon, the King & Queen of the heavens meet in Pisces and both begin a new cycle of the zodiac as they enter Aries together (see Equinox below). Wow!

A Solar Eclipse is a New Moon with extra oomph symbolising new beginnings but this time around it’s an ending as well as a beginning. What do you have to let go of before you start over? It’s a dynamic energy and as eclipses often bring what’s hidden to light, there could be a few surprises on or around the eclipse. If you have planets/angles at the end of Pisces, beginning of Aries this feels particularly important for you.

This is a significant date in the year and psychologically there’s a shift as we welcome in a new season. It’s one of my favourite times of year as spring is on the way and I’m already feeling the ‘spring clean, start over’ excitement.

This is the day that the Sun moves into Aries with the Moon in tow. Align your outer wants with your inner needs and consider where in life you’re ready to start over. When key planets move into Aries, this represents a surge of energy and a chance to reboot, rejuvenate, replenish.

Do read your monthly stars for March which you can find as individual blog posts on the home page or on the ‘Monthly’ page on the navigation bar at the top of the page. Read your individual Sun Sign (also called Star Sign) and Ascendant Sign to gain a fuller understanding of the astro-weather for March. The more information at your fingertips, the more chance you have to create some magic and sparkle in your life in the month ahead.