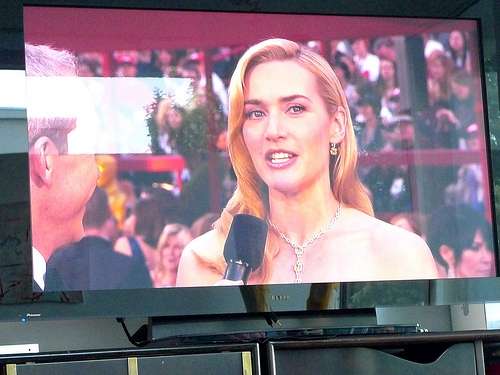 Kate Winslet (37) has notched up her third marriage in as many decades. Last month in December 2012, she married Richard Branson’s nephew, Ned RocknRoll or, as he was christened, Ned Abel Smith. He changed his name by deed poll in 2008.

Kate met her new husband in August 2011 on Necker Island, Richard Branson’s personal retreat, where she was holidaying with her two children and her Burberry model boyfriend, Louis Dowler.

It was a hectic holiday as not only did Kate and Louis part ways but Kate heroically rescued Richard Branson’s 90 year old mother and carried her to safety when the house dramatically caught fire and was badly destroyed. By autumn 2011, Kate and Ned were an item.

The fact that Kate’s married for a third time has raised a few eyebrows, as suggested by the article ‘Why can’t Kate Winslet stop getting married?’ Kate is without doubt a brilliant actress, the youngest person to gain six Oscar nominations winning the Best Actress Award in 2008 for her role in The Reader, but why the need to marry again?

The immediate answer that springs to mind is “because she’s a Libran”. Libra’s the sign of relationships and whether a Libran is in love, out of love or somewhere inbetween, relationships are a no. 1 priority. It is the major theme that runs throughout their lives.

As Kate’s horoscope shows (see below) she is no ordinary Libran but a triple Libran, i.e. she has the Sun, Moon and Ascendant all in the sign of Libra plus mind planet Mercury and for an extra kick of intensity the power planet Pluto. This stellium of planets all gathered around the Ascendant in the sign of beauty Libra highlight Kate’s looks. In the past Kate has acted as a spokesperson for women, often criticising how they are portrayed in the media and Hollywood’s obsession with body image.

The stellium in Libra emphasizes the importance of relationships in Kate’s life and being born on a New Moon indicates she’s a positive person, someone who’s action-oriented and lives in the moment. The Moon is especially powerful as it rules the 10th house of career and status and gives her the gift of being able to capture other peoples’ moods and emotions through the power of film and her role as an actress. The Moon also symbolises the importance of her other role as a mother to her two children.

Ned RocknRoll is a Cancerian with the Sun, Mercury and Jupiter all in the sign of family (see below). Cancer and Libra are both cardinal signs, the leaders and innovators of the zodiac and although the two Sun signs aren’t an ideal match, they are fundamentally kind and caring signs which prosper being part of a harmonious home and family life.

The synastry between the two charts is fascinating, although with no time of birth for Ned, there may be further astrological connections between them. In Ned’s chart, the closest aspects involve his Mercury/Jupiter conjunction in Cancer square to Pluto in Libra. Mercury rules communication and Jupiter expands what it touches and with only 1 minute of arc between the two planets, this implies a gushing and enthusiastic personality.

Kate also has a close Mercury/Jupiter opposition in her own chart which suggests they have no shortage of things to talk about and in photos they often look as bouncy and vibrant as two young puppy-dogs.

Ned’s Mercury/Jupiter conjunction at 14 Cancer 15 and 14 Cancer 14 respectively is close to Kate’s Midheaven, the success point of her chart, at 14 Cancer 48. Back to Ned’s chart and Mercury/Jupiter square Pluto. Jupiter/Pluto aspects are often about power and wealth and Ned works for the space-travel division of multibillionaire Uncle Richard’s company Virgin Galactic plus his first wife, Eliza Pearson, was a billionaire heiress. So he’s probably not short of a bob or two.

One can only speculate what his Mercury/Jupiter conjunct Kate’s Midheaven represents, but it’s obviously a good career/financial move for one of them if not both of them, and they may view each other as kindred souls at the upper end of life’s wealth and success scale. Jupiter is lucky and expansive and opens up new gateways and opportunities.

The interesting connection is Ned’s Pluto at 13 Libra 54 which sits on Kate’s Moon at 13 Libra 05. This is a deep and powerful connection, intense and all-consuming. The Moon rules the emotional realm and Pluto brings a primal quality to their intimate relationship. With this connection, it’s very possible that the couple will want to have a baby together to tighten the bond between them.

Jupiter is often associated with pregnancy because it’s the big planet that rules growth and blessings and Jupiter currently in Gemini is in trine (harmonious) aspect with Kate’s stellium in Libra up until May 2013. Plus Uranus, planet of surprises, crosses over her Descendant (relationship point) in May 2013 and at the end of June 2013 Jupiter enters Cancer, the sign that’s ruled by the Moon.

Jupiter passes over Ned’s Sun in Cancer in July 2013 followed by his Jupiter return (12 year cycle) in September 2013, suggesting a summer of happiness and good fortune. We may not have to wait very long before there’s a new development and surprise twist in the Winslet-RocknRoll story.