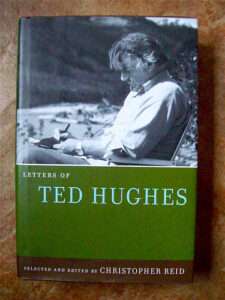 Ted Hughes was an expert in astrology who regarded it as an art rather than a science and his letters showed he urged his editors to publish his books on dates that were auspicious.

Poet Laureate from 1984 until his death, Hughes wrote a christening poem for Prince William entitled “A Zodiac In The Shape Of A Crown“, which described the prince’s horoscope in detail.

In 1963, Sylvia Plath committed suicide leaving behind their two young children. Ted Hughes remained silent about their marriage until a collection of poetry entitled Birthday Letters

was published in 1998 and many of the poems spoke of Sylvia and their relationship.

It became a best seller and in it he used more astrological references than he had ever done in his earlier nature poetry. One poem was even entitled, “Horoscope”.

That points at him amazed.

from “Full Moon and Little Frida”