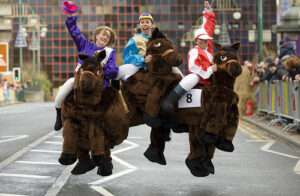 Many moons ago in the late 1980’s, I was a member of an elite group entitled “Gambling And Spirituality”.

Keen astrologers all, we would meet at a venue in London to draw up astrology charts for the coming weekend’s horse races, to try and predict the winner. Results were mixed, but better than random.

I still use the same formula every year to predict the Grand National, although it has to be said this is one of the most hit-and-miss horse races of the season, due to its unique nature. If your horse lasts the distance and finishes, you’ve done well.

However, not one to turn down a challenge, this is how it’s done and at the bottom of the  page you’ll find our family’s predictions for the 2012 Grand National.

First of all, you need to draw up the chart for the start of the race. Here it is below: The first planets to consider are the ruling planet and the Moon. Let’s start with the ruling planet. In this chart, there’s a Virgo Ascendant so Mercury is the ruling planet. Mercury’s in one of the angular houses and it rules the Gemini Midheaven, the point at the top of the chart, so it’s an important planet in the chart. Mercury is in Pisces,  a sign it doesn’t particularly like, as watery Pisces is associated with the sea and is boundless.

Mercury lacks precision in Pisces but already we have some key Grand National runners to consider, e.g. Seabass, as Pisces’ zodiac symbol is two fishes, swimming in opposite directions. In addition Organisedconfusion, which sounds about right for the planet that likes to be organised, Mercury, in Pisces, a sign which can be described as dazed and confused. There are also two horses which share the name of the God of the sea and they are Neptune Equester and Neptune Collonges.

In the chart, Mercury is in a wide conjunction to Uranus, the wild card, and when Uranus figures, there’s often a strong chance that it won’t be the favourite to win but an outsider. This theory is backed up by the Moon in Aquarius in the 5th house. The 5th house is associated with gambling and competition as it’s the house of luck. Aquarius is the sign that’s ruled by Uranus and has a reputation for being an individual and eccentric. Weird Al is worth a shout if a prediction were to be based on the Moon alone.

The Moon is at 9 Aquarius trine to Venus at 9 Gemini on the Midheaven, up at the top of the chart. Planets on angles are asking to be noticed so we have to take Venus in Gemini into account. Gemini’s zodiac symbol is the twins and twos are associated with Gemini, so it’s worth looking at horses who have repetition in their name, e.g. Shakalakaboomboom or alliteration, e.g Vic Venturi. I also like Hello Bud for Venus in Gemini, Venus ruling flowers and Gemini, the sign of talk and chatter. If we were keen on the favourites, Synchronised and Ballabriggs would fit the “double” theme, as Synchronised won the Cheltenham Gold Cup and will do the double if it wins the National and Ballabriggs was last year’s winner.

One other factor to note about Venus is that it’s next to the south node, a potential blind spot in the chart, which surely flags up Becauseicouldn’tsee.

The Moon is in a close trine to Venus but it’s separating not applying so it’s important to look at the Moon’s next aspect, which is a square to Jupiter in the 9th house. Jupiter expands what it touches and it’s the planet that rules horses, so listen out for the hype, what horse is everyone shouting about?

Jupiter was King of the Gods in mythology and the god of the sky and thunder. It suggests noise, which points to Planet Of Sound but also Shakalakaboomboom, which is bound to be popular because of its name. Jupiter is the royal planet and associated with the colour purple, so keep an eye out for Deep Purple and also Chicago Grey, whose jockey’s wearing purple silks, plus Jupiter rules travel and foreign destinations.

The other major astrological event on Saturday is Mars, the red planet, turning direct in Mercury’s sign of Virgo. Mars is currently opposing Neptune, but the red silks and name of West End Rocker tip a nod towards Mars.

As you can see, predicting a winner using astrology is complex, especially with such a large field of horses to choose from as there are 40 runners in the Grand National. Hopefully, this inspires you to single out your favourite and the final ingredient to choosing a winner is trust your intuition. Here are our family’s choices for the 2012 Aintree Grand National.

Mum: West End Rocker & Becauseicouldn’tsee (I am aware that West End Rocker is one of the favourites, but I love the name and being a Scorpio Sun, Aries Ascendant, I’m veering towards Mars)

Dad: Seabass & According To Pete (both in his football club’s colours, red)

Daughter: Shakalakaboomboom & Junior (chosen entirely because of their names)

We won’t make a fortune if we win as we always go for each way odds but usually one of us has a horse in the top 5, and I believe it’s my turn this year. Good Luck!

Postmortem is unfortunately the relevant word as two horses died in this year’s Grand National, the same as last year. This year’s chart wasn’t without its difficulties and the south node conjunct the Midheaven in Gemini, sign of the twins, speaks of the two fatalities. In event charts, the south node is an “unfortunate” placing.

Also at the top of the chart was Venus (women) in Gemini (dual sign) and here were the two lady jockeys, both riding good horses, with a strong chance of winning. In the end, Katie Walsh on Seabass came 3rd, the best finish yet for a female rider and Pisces/Neptune symbolism dominated the top 5, with Neptune Collonges the victor, Seabass 3rd and Cappa Bleu 4th (blue is Pisces’ colour). As predicted, it was an outsider that won and if you had an each way bet on In Compliance at 100-1, who finished 5th, you’d have done very nicely.

On the note of money, it was always going to be the bookies’ day. The 2nd house rules the punter’s money, the 8th house rules the bookies’ money and the 8th house fared better than the 2nd. The ruler of the 2nd, Venus was conjunct the south node with Saturn, planet of limitation in the 2nd house, whereas the Sun was exalted, strong in Aries in the 8th house. We didn’t get our money back this year, although yet again we had one horse in the top 5, Seabass. We shouted and shouted for Shakalakaboomboom, my daughter’s horse who was in with a great chance of winning but faded at the end.

In retrospect, I should have paid more attention to the ruler of the 5th house of gambling, which was Saturn. Saturn opposes the Sun in the chart and the unlucky runner-up who was pipped at the post was called Sunnyhillboy (the Sun opposite Saturn, which rules mountains and hills). Better luck next year.