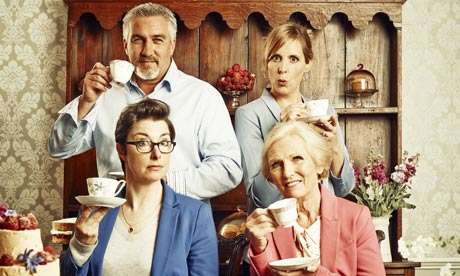 This article will no doubt bamboozle those of you who don’t live in the UK where one of the great shocks of recent weeks has been the news that one of our most treasured TV programmes, the Great British Bake Off has been sold to Channel 4. The national tragedy was announced on September 12th 2016.

This is unthinkable for many of us because for the past 7 years #GBBO has been on the BBC (the establishment channel) and Bake Off is quintessentially British. It’s a programme about cakes & buns, for heavens sake.

Two of the original presenters, Mel & Sue, were the first to quit as they weren’t willing to ‘follow the dough’. The BBC couldn’t afford to keep the show. This week the darling of our screens, Mary Berry, also stepped down citing her reasons why and ending with the infamous line ‘farewell to soggy bottoms’.

Yet one of the four has furtively crept in the back door of Channel 4 and signed a three year deal to stay as a presenter on the much-loved show. This is of course Paul Hollywood, who we now know is a Sun Pisces.

This is interesting information firstly because two years ago, I wrote about the four presenters of Bake Off and the much-loved show. Here’s the original article: Why We All Love The Great British Bake Off.

All Four Elements Complete The Set

At the time there was no birth-date for Paul on the internet, only a year of birth but I speculated that he was a water sign, Cancer, Scorpio or Pisces. I plumped for Scorpio (and personally, I still think he might have a Scorpio Ascendant). His eyes are a give-away as water signs often have mesmerising eyes, especially Scorpio and Pisces.

Yet another reason why I suspected he was a water sign was because this would produce a full set of Sun sign elements shared equally between the four presenters. Mel Giedroyc (b. June 15 1968) is a Sun Gemini – air element, Sue Perkins (b. September 22 1969) is a Sun Virgo – earth element and Mary Berry (b. March 24 1935) is a Sun Aries – fire element. Paul Hollywood (b. March 1 1966) is now confirmed as a Sun Pisces – water element, completing the set.

Taking a quick glance at Paul’s chart, this is a slippery move on his part. He’s not only a Sun Pisces, sign of the fishes, but he has in fact a stellium of planets in Pisces (see his chart below. Note the chart is set for mid-day but the time is unknown).

On the day the news broke that #GBBO would no longer grace the BBC and remain advert free, Neptune was at 10 Pisces 30, almost exactly conjunct Paul’s natal Sun. Four days later on September 16th, there was an eclipse at 24 Pisces 20, spotlighting his natal Mars. Eclipses present a shadowy theme, a hidden agenda.

Little did we know then that Paul would be the sole presenter to swim over to Channel 4. His astrology suggests it was a sly move on his part and perhaps he has been seduced (Neptune) by the money, the glamour or the desire to be a bigger fish in a small pond. Only time will tell but I suspect when Bake Off returns in a new guise, there will be a few unhappy fans throwing their half-baked buns at the screen. 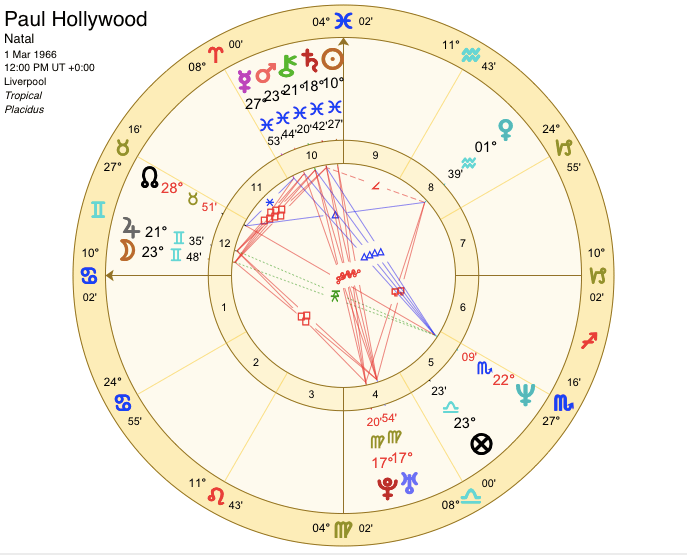