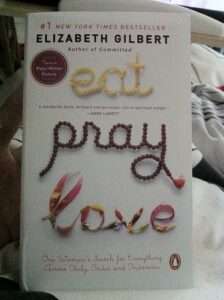 I was seeking creative inspiration yesterday which took me on a trail that lead me from blog to video to book to astrology and finally to this blog. I love days like that when what you read or discover connects to something else, then something else and suddenly everything seems interlinked and deeply meaningful.

The starting point was an astrology blog I subscribe to entitled Blue Moon Astrology written by Elaine Kalantarian. Winging its way into my inbox came her recent article on the Sun’s move into Sagittarius called Divine Inspiration. I love the way Elaine writes and her articles are always lyrical and inspiring.

At the bottom of the article was a link to a Ted talk that I’d always meant to view but never got round to. It’s by Elizabeth Gilbert, author of the fabulously popular feel-good novel, Eat, Pray, Love: One Woman’s Search for Everything

, which documented her travels and experiences in Italy, India and Indonesia.

The talk was about nurturing creativity and your elusive creative genius. You can view the video here. The idea that Elizabeth put forward was that as a creative person you can’t ‘be’ a ‘genius‘ but you ‘have’ a ‘genius‘ that’s found outside of you. This idea comes from the ancient Romans and a similar idea originated in ancient Greece but they called this entity a ‘daimon’. It can also be termed a ‘guardian angel’ or a ‘spirit guide’.

This concept isn’t new to me as the idea of the ‘daimon’ is used in traditional astrology and especially horary astrology which is a form of divination. Horary astrology involves drawing up an astrology chart for the precise time that a question is asked. Through astrology and the astrologer’s participation in reading a chart, the ‘daimon’ communes with you, a direct link between the human and the divine worlds.

This then reminded me of one of my favourite books, The Soul’s Code: In Search of Character and Calling

, by James Hillman. James Hillman was an archetypal psychologist who died last year aged 85. His son Laurence is an astrologer and I had the privilege of attending a workshop run by father and son on planetary archetypes many years ago. In his book, James takes the idea of the ‘daimon’ or ‘genius’ one step further and suggests that each of us has a calling or destiny that’s often evident from a very early age. It’s a wonderful book that uses the extraordinary (examples of famous people who’ve followed their calling) to inspire the ordinary.

I must have spent over an hour re-reading The Soul’s Code, enjoying the video and immersing myself in these theories and ideas about creativity and the concept of the ‘daimon’ or ‘genius’. It felt very Neptunian: Neptune, being God of the sea and the boundless planet, rules images, mystical and psychic experiences and all that inspires us. In Neptune’s world, we wander around soaking up new experiences, sounds and images like a sponge.

A quick look at the charts for both Elizabeth Gilbert and James Hillman confirmed the connection to Neptune. They may be different Sun signs, Elizabeth (b. July 18th 1969), Sun Cancer and James (b. April 12th 1926), Sun Aries but they both have the Sun in an extremely close trine aspect to Neptune. Sun trine Neptune is a classic aspect for people who are interested in mysticism, the intangibles of life and creative expression. Neptune represents the muse and perhaps also the ‘daimon’ or ‘genius’. If you’re interested, you can view Elizabeth’s chart here and James’ chart here. (The time for both charts is unknown so the charts are drawn up for noon).

All this musing and exploration inspired me to write this blog and the cycle of creative inspiration is complete. The word inspire means to ‘breathe in’ so maybe if you lose sight of your own ‘genius’, be re-inspired by knowledge, other peoples’ ideas, nature, music, poetry, whatever does it for you personally and ‘breathe in’ a fresh way of looking at the world.

Wearing my astrologer hat, I know that Neptune is the dominant planet this week as it not only squares the Sun in Sagittarius but trines Venus in Scorpio, both in early degrees of their signs. If you have Neptune strong in your own chart (as do I), why not allow yourself some time and space to explore your favourite ways of connecting with divine inspiration and be open and receptive to your ‘genius’.