Today is the Solstice, June 21st, the mid-way point through the year. This is one of the four markers of the seasons, when the Sun moves into the cardinal signs, Aries (March), Cancer (June), Libra (September) and Capricorn (December).

These markers are essential in western astrology as the zodiac is aligned with these four points in the astrological calendar. The foundations, cornerstones of astrology.

Here’s a reminder of why this is such a significant event.

“The summer solstice by definition transcends borders, religions, ethnicities. It unites rather than divides. Reassuringly, it harks back to a time long before Hinduism and Buddhism had entered the world’s consciousness, far earlier than the three great Abrahamic faiths that divided the planet’s population into rival God-fearing monotheists.

In our endlessly, celestially revolving world the solstice demands a moment of stillness and reflection. Its very etymology – from the Latin sol (sun) and sistere (to stand still) – indicates that almost miraculous point of transition, sandwiched between cycles of movement, when the sun appears from Earth to have reached its most northerly or southerly excursion relative to the celestial equator and then, after “standing still”, reverses course. It is the longest day, the triumph of the sun, a celebration of midsummer and a marker that the days will start to shorten.

For a fleeting moment the entire year is on hold, a moment of flux and suspense beautifully caught in Margaret Atwood’s Solstice Poem:

This is the solstice, the still point
of the sun, its cusp and midnight,
the year’s threshold
and unlocking, where the past
lets go of and becomes the future;
the place of caught breath, the door
of a vanished house left ajar.

The summer solstice once marked the beginning of calendars, the season of harvest, the ancient middle of summer: a time to celebrate fertility and the life-giving strength of the sun in a pre-industrial environment. In today’s less rural world, for many people that ancient connection with the cycle of nature has been lost. Yet our fascination with the solstice remains curiously undimmed, as though deeply embedded in our ancestral memory.”

There is something so hopeful about the Solstice. The ancient tradition of honouring the Sun connects us to the distant past and the comforting repetition of the Sun’s movement is a dependable anchor in our lives day  in, day out.

It represents the symbolism of the promise of a new day, a new dawn. The quality of the moment when the sun rises and the light returns, brings with it hope and a feeling of peace that the dark hours are behind you. 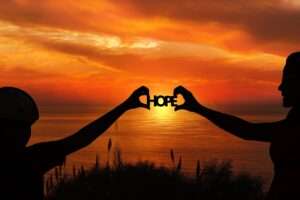