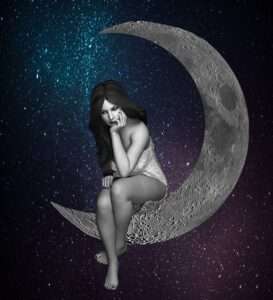 There has been huge media coverage of this weekend’s so-called ‘Black Moon’. Some articles call it super-powered energy, others say the Moon will appear shaded or black, whilst some even hint that it’s a sign Jesus is coming or the end is nigh. One news provider was so excited to get in on the ‘Black Moon’ rush that it went with the wrong star sign.

So what is a ‘Black Moon’ and does this weekend’s New Moon count as one? This is an interesting question because the New Moon which takes place at 8 Libra 15 is exact on October 1st 2016 at 00:11 GMT, i.e. close to the end of September and the beginning of October.

GMT stands for Greenwich Mean Time and it was chosen because the Meridian line (0 degrees longitude) runs through Greenwich, a borough of London in the UK. If you go to the Royal Observatory at Greenwich, which is well worth a visit, you can straddle the Meridian line, i.e. stand with one foot in the western hemisphere and one foot in the eastern hemisphere. To the left of the line, the time is ‘behind’ GMT; to the right of the line, the time is ‘in front’ of GMT.

What Does It Mean?

It’s known that the Black Moon is the New Moon counterpart to the Blue Moon, which is the rare event of a second Full Moon in a calendar month, hence the saying ‘once in a blue moon’. But what does it mean, if anything? Look it up on the internet and some people think it’s a good time for ritual and others state the opposite, that it’s a bad time for ritual.

In conclusion, there’s no definitive answer. To be quite honest, it’s simply another New Moon but what a stunning one this is, not because of its name but because of the planet it highlights, Jupiter.

If you want to make this weekend’s New Moon special, do so. The exact time of each New Moon is both the end and beginning of a new cycle, a seed moment. How will you fill the void? What intentions will you set? Now’s the ideal time in the month to be pro-active.

You might already have noticed that you only see the crescent moon in the sky a day or two after the date of the New Moon which is a time of darkness. Traditionally it’s when you make a wish on the crescent moon that dreams come true.

Coming next, my article on the New Moon in Libra and why it’s a brilliant time for new beginnings.