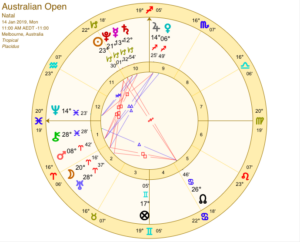 Update: As predicted, Djokovic won the Australian Open. His astrology was closely linked to the tournament chart, which showed the favourite doing well. Nadal was the Uranus factor, surprising many by his swift defeat of his opponents, all the way until the final.

It was the Leo, Federer, who was eclipsed in the run up to the Leo eclipse by a Leo, the young contender, Tsitsipas. It turned out that even without a time of birth, we could see that Tsitsipas had some stunning fire sign transits.

Thank you to everyone who commented, especially those of you who add a huge amount to the astrological prediction. Look forward to seeing you all again at the French Open in June.

The run-up to the Australian Open turned out to be a tearful affair for Andy Murray as he announced his likely retirement in 2019. The Moon was heading to Neptune when he broke down in tears.

There are some major transits which have been difficult for Andy since his last Grand Slam win at Wimbledon in 2016. Later that year, Andy had his Saturn Return which can often coincide with a major turning point in your life. Andy’s Saturn is in Sagittarius, the sign that rules the hips, and his right hip has been an ongoing issue for him since early 2017.

Also, Neptune, the planet of dissolution, has been going back and forth over Andy’s Descendant, since May 2017. Neptune is exactly conjunct his Descendant this month, January 2019. The Descendant is the relationship point in astrology and sits opposite the Ascendant, the point in the horoscope which rules you, your physical body. Neptune can bring sadness, a feeling of dissolution that things are falling away.

Andy’s Saturn is at 19 Sagittarius and lucky Jupiter will go back and forth over his natal Saturn this year. Yet, Jupiter rules liberation as well as opportunity. Neptune tries to hide you from the truth whereas Jupiter can release you. Playing tennis at the highest level may elude Andy this year but he has every reason to be proud of his incredible career. Check out this article on why Andy Murray may be Britan’s greatest sportsman: Andy Murray.

The tournament chart is printed above. Two planets stand out – Jupiter at 14 degrees Sagittarius, which rules the Pisces Ascendant and the Sagittarius Midheaven. It’s the ruling planet and the planet linked to success. Jupiter is exceptionally strong right now so any player who has key planets/angles linking in to Jupiter could do well. On its own, it’s a strong showing for the favourite to perform well.

The only proviso is Jupiter’s recent square aspect to Neptune, which is close to the Ascendant of the horoscope. This symbolises big dreams which aren’t grounded in reality. This planetary combination is full of hope but success can elude you – just ask Andy, as this square aspect will dominate his natal chart until September 2019.

The planet representing women, Venus at 6 Sagittarius, is heading towards Jupiter. The two benefics, i.e. best planets, are side by side on January 22nd at 16 Sagittarius. Also, Mars is in competitive Aries all competition – strong – and there’s a Lunar Eclipse on January 21st at 0 degrees Leo – who will be eclipsed?

The Moon at 20 Aries is heading towards a conjunction with Uranus at 28 Aries, although it has to encounter the Sun/Pluto conjunction in Capricorn first. Uranus is another planet that can trigger a win. Uranus represents life’s highs and lows, both ends of the success axis, so it’s more difficult to predict with Uranus. Uranus proved pivotal for Alexander Zverev at the end of 2018 – see below – also look for planetary connections at 28 Aries.

Uranus is the theme of the new, the non-favourite. Slightly conflicting messages then for the tournament chart, which doesn’t make for an easy prediction. Any thoughts you may have on the astrology, please add them in the comments below.

Here’s the astrology for the top seeds. As usual, the GOATs dominate the top 3 places. I read in an article recently that the combined age of Djokovic, Nadal & Federer is 100 – go figure!

Djokovic is the no. 1 seed and has won the last two Grand Slams. This coincided with the Sun progressed to Mars, his career planet, exact in August 2018. He’s born exactly one week after Andy Murray but they are different star signs. Plus, Neptune by transit is currently trine Novak’s Midheaven, i.e. helpful for him.

Also, Novak starts the competition with a strong Mars conjunct his north node at 8 Aries, the destiny point in astrology. By the day of the final, Mars is one degree away from his natal Jupiter, promising good fortune. Add to this the fact that the tournament chart’s Midheaven is 19 Sagittarius 05 and Novak’s ruling planet, Saturn, is 19 Sagittarius 07 and the astrology is compelling. If anyone can see anything worrying about Novak’s stars, please tell.

The last time Rafa won at the Australian Open was 10 years ago, 2009. He comes into this tournament with injury worries. Therefore, he needs some pretty amazing astrology to predict a win. Rafa’s natal Uranus is at 20 Sagittarius so it’s not far off the tournament Midheaven, success point, and lucky Jupiter will reach his natal Uranus in February 2019.

However, other than that, I’m struggling to find great astrology for Rafa. Also, I did note that the eclipse at 0 Leo is exactly square his natal Moon at 0 Taurus in his 6th house, which I don’t like personally for staying injury free. Let me know if you see otherwise.

Roger is a fire sign, Leo, and there’s strong fire sign energy during this tournament. The other two fire signs being Aries & Sagittarius. Lucky Jupiter will trine his natal Sun during the tournament, exact on January 19th.

The Leo eclipse on January 21st is a question mark for him as it falls exactly on his natal north node at 0 degrees Leo. We have seen eclipses bring success. Like Uranus, they are another factor that is linked to wins or losses. On its own, that could signify a win but Roger has a Saturn transit exactly opposite his Mars on January 22nd. So, Jupiter glory; Saturn gloom. A mixed bag for Federer.

Other players to note:

Alexander had a stonking November at the ATP finals 2018 when he beat Federer and Djokovic to win the title. On the day of his success, Uranus was exactly conjunct his natal Sun at 29 Aries. Back in May 2018, when Uranus was first at 29 Aries, he won the 2018 Madrid Open.

Uranus transits are often date-specific and his final transit is in March 2019. However, the 3am time gives him a Capricorn Ascendant and tricky Saturn will be exactly conjunct his Ascendant, ruling self/physical body at the same time. I note he goes into this tournament with some injury concerns.

A birth time of 5-6 am has been suggested for Nishikori, which would mean lucky Jupiter is close to his Sagittarius Ascendant. With strong Capricorn planets, he may have the potential of turning the Jupiter-Neptune dream into reality.

Dimitrov has his natal Mercury at 29 Aries so he has an exact Uranus transit in February 2019. As the tournament begins, transiting Mercury is exactly conjunct his natal Uranus at 13 Capricorn. It’s weird astrology. However, if the 11:30am birth time is correct, his Midheaven, success point, is 28 Aries 38 and definitely one to watch!

Goffin was born with the Sun at 15 Sagittarius and lucky Jupiter is conjunct his natal Sun during the tournament.

One of the home favourites, Kyrgios is having his lucky Jupiter Return as the tournament begins. Without a birth time, we don’t know where it falls in his birth chart but his natal Jupiter is 14 Sagittarius.

I’ll be interested to see how the Sun Aries’ players do with their planets Mars strong this tournament. It certainly boosts Wawrinka’s birth chart but he’s another player who’s had a significant injury recently.

The astrology says: Djokovic is once again the player to beat.

Welcome back everyone and Happy New Year! Please play nicely in the comments and let me know your thoughts on the astrology or any other information that will make our tournament viewing a happy one.

So you know, I haven’t updated my website. If you have problems posting comments, let me know via my Facebook or Twitter account or contact me directly at sally@sallykirkman.com. I will make it a priority to try and get the issue fixed before the French Open in June. Thank you.