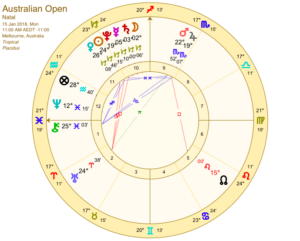 Update: Wow! Roger Federer won his 20th Grand Slam. If you want to know what a Jupiter transit of the Moon looks like, check out his thank you speech. An outpouring of emotion from Federer and an outpouring of adoration from the crowd – the Moon symbolises emotions and represents the ‘people’ in mundane astrology, world events.

I would also like to point readers to the prediction by Indian astrologer, Greenstone Lobo, who said as far back as 2013 that Federer could win 20 Grand Slams. An amazing prediction considering Federer’s age at the time. Here’s the link: http://www.dnaindia.com/sports/column-octozone-20-grand-slams-a-possibility-for-roger-federer-1869633. Roger Federer reigns supreme at the age of 36. What an achievement!

The Australian Open is underway and once again, there are injury concerns for a lot of the top players. This seems to be a common theme which opened the door for two of the ‘oldies’ of the circuit to share the Grand Slam trophies between them in 2017.

Not just two ‘oldies’ but two of the all-time great tennis players, Roger Federer & Rafael Nadal, who won two Grand Slams each last season. Nadal and Federer, age 31 and 36 respectively, are the top 2 seeds once again.

So what can astrology tell us? Since the end of last season, two of the major planets have changed star sign. Saturn is now at home in its sign of rulership, Capricorn, a dignified placing for the planet of authority and hard work. While Jupiter, the planet that promises good fortune and opportunity, is in water sign Scorpio, powerful and intense.

In plain terms, Jupiter bestows success and Saturn is the grafter, but linked to injury worries, as it’s the planet of limitation. The chart for the start of the Aussie Open emphasizes the star signs, Scorpio and Capricorn. Note a full complement of planets in Capricorn in the 10th house of achievement. This includes the Moon, which is about to begin its swift journey through Capricorn triggering the other five planets.

Jupiter is an important planet in the chart because it rules both the Pisces Ascendant and Sagittarius Midheaven, two key angles in astrology. One represents the individual (Ascendant) and the other represents the pinnacle and achievement (Midheaven) of the chart. Jupiter is, therefore, the planet that symbolises the favourite. Mercury, ruler of the Descendant, is linked to the outsider, non-favourite and Mercury gives the nod to the youth, a younger player.

Jupiter is applying to a powerful sextile aspect with Pluto in Capricorn, Scorpio’s co-ruler, a major signature in the chart. This lends gravitas to the favourites’ chances of success. Note too, the Moon’s first planetary aspect will be a conjunction to Saturn, favouring the older player. Admittedly, both Saturn and Pluto can symbolise defeat but there’s strength in this planetary combination.

This is, however, the dark side of the Moon, when the light has not yet returned. This happens once the Moon reaches the Sun in Capricorn and a new moon cycle begins. This week’s New Moon is exact at 26 Capricorn 54 on Wednesday 17, 2018. Hidden themes could be the injury fears that lurk beneath the surface, what we don’t yet know. Otherwise, you have to like this chart for the favourites playing well.

Nadal’s Ascendant degree is 19 Scorpio 45. Notice Jupiter’s current transit at 19 Scorpio 07. This symbolises a renaissance for Nadal, as Jupiter moves over his Ascendant into the 1st house. There are other factors too connecting Nadal’s birth chart to the current astrology.

His ruling Mars is at 22 Capricorn 56 and in the thick of the Capricorn activity taking place. Nadal has a strong Scorpio (ASC)/Capricorn (Mars) signature in his own birth chart. Also, at the final, the Moon has moved to 23 Gemini and will apply to a conjunction of his natal Mercury (26 Gemini 23), his career planet. The astrology is compelling. This should be a strong tournament for him.

Update: Nadal retired in the semi-finals against Cilic with a leg/hip injury. Transiting Neptune was moving towards a square aspect of his Sun Gemini, exact on February 2nd. Neptune square Sun can be disillusioning but I’m not clear why this coincided with the injury. Jupiter rules hips and was conjunct his Ascendant, the physical body, but I felt the Jupiter transit and Pluto sextile would be positive for Nadal. So the jury’s out on the astrology for Nadal.

Federer has an important planetary body in the mix of the Jupiter/Pluto configuration. His Moon is at 20 Scorpio 44 and Jupiter by transit will be conjunct his natal Moon on January 27, 2018. The Moon isn’t closely connected to his career but this has to be helpful.

A lot of the planets in Federer’s birth chart connect with each other. Plus, with his Mars Cancer in mutual reception with his Moon Scorpio (i.e. each planet is in the other planet’s sign of rulership), you can make a case for this Jupiter transit playing into his chances of success.

Update: The added astrological factor I didn’t pick up on was the north node at 15 degrees Leo as the tournament began. It sat between Federer’s Sun Leo and Mercury Leo, his career ruler. The nodes are linked to destiny moments and along with the Jupiter transit of the Moon, this was Federer’s moment.

Wawrinka starts the tournament with a dodgy knee and knees are ruled by Saturn. At the start of the tournament, he has natal Neptune conjunct his Pisces Midheaven, dreams of glory or is it all an illusion?

Djokovic starts the tournament with an elbow injury symbolised by Saturn, ruler of the bones in the body. Transiting Saturn is currently in Djokovic’ 12th house, a notoriously challenging transit for the planet of limitation.

He does have Jupiter in his 10th house as his Midheaven, success point is 14 degrees Scorpio. There’s no exact transit, however, although, with a Capricorn Ascendant/Scorpio Midheaven (11:25 pm birth chart), the current astrology could be helpful for him.

I’ll write more about Best of the Rest at a later date. They might be out in round 1 the way the tournament’s going!

Prediction: Nadal’s astrology is strong – the one to beat.