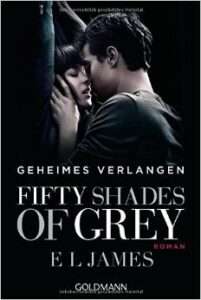 Update: There is now a time of birth for Dakota Johnson, 14:49, giving her a Capricorn Ascendant. Her ruling planet is therefore Saturn making the T-square mentioned below powerful in her chart. Plus she has the asteroid, Black Moon Lilith conjunct her Scorpio Midheaven – perfect. Lilith is wild, untamed woman, female energy unleashed. I’m going to have to watch the movie now!

Fifty Shades of Grey has premiered at the cinema in the UK this Valentine’s weekend and I for one am not going to see it. I picked up the book when it first came out, mainly because it was a huge bestseller and I like to keep my finger on the pulse with cultural trends, but I put it down again fairly quickly.

The writing didn’t impress me and personally I found the story repulsive. It read like an overly-erotic Mills & Boon and, for want of a better pun, it left a bad taste in my mouth. The novel wasn’t sexy for starters and it seemed to have little to do with love. It left me cold.

It seems I’m not the only who’s unimpressed as over the last few days there’s been a media backlash with some extreme opinions and more than a few people firmly staking their flag in the ‘Fifty Shades of Grey is domestic abuse’ camp.

I don’t fall into that camp personally but it’s not the type of film I would want my 14 year old daughter going to see and thinking this is the kind of relationship to aspire to. I would find that unacceptable.

Now it seems important at this point to add that I’m not a prude and this isn’t a Mary Whitehouse rant of old. I have both the Sun and Venus in ‘sexy’ Scorpio and I’m the first to speak up when I find something sexy or sensual but Fifty Shades of Grey wasn’t it for me.

As an astrologer however it’s always intriguing to find out what the astrology reveals. Is there a signature that defines the novel/film and what is it about the key players involved that attracts them to take part?

What do we know so far? The movie has premiered on Valentines weekend when the Sun is in Pisces, the sign of romance, and Venus and Mars, the lovers of the heavens, are both in Pisces and moving ever closer to a conjunction, i.e. they sit side by side in the zodiac. Plus both E.L. James (b. March 7 1963), the author of the novel, and Sam Taylor-Wood (b. March 4 1967), one of the film’s directors, were born with the Sun in Pisces.

The scene is being set for a gentle love story with the emphasis on the romance sign Pisces. Yet, Venus and Mars, the lovers in the heavens, are fooling us as they don’t make their conjunction in Pisces.

This is significant as Neptune is Pisces’ ruling planet and Neptune represents deception, illusion, dissolution. We see life through rose-coloured glasses in Neptune’s realm and we can be seduced, gullible, easily fooled in Neptune’s world.

Lovers In The Heavens

Yes, Venus and Mars are currently in romantic Pisces along with Neptune and the Sun but they make their conjunction next weekend in the masculine ‘I get what I want’ sign of Aries. Venus and Mars enter Aries on February 20th 2015 and come together on February 22nd 2015. Venus rules the feminine principle, a universal symbol of women, and Mars rules the masculine principle, a universal symbol of men.

What’s intriguing about this run of symbolism is that Venus representing love, femininity, a gentle nature, is the stronger of the two in Pisces as she is exalted in the romantic water sign. Once the lovers enter Aries, Venus is in fall and in a sign she doesn’t like whilst Mars, potentially confused and disoriented in Pisces, finds his stride in Aries. He becomes the hero ready to conquer & dominate the world; he’s forthright, masculine and can take charge.

This means we are being lulled by the current astrology and the allure of a romantic love story, seemingly perfect for Valentines Day. ‘Watch Fifty Shades of Grey with your lover and be seduced by the story of love’, the film suggests. Yet my impression is that the novel/film is more akin to a Martian theme and it’s the man represented by Mars who dominates the woman represented by Venus. Lady love is weak in Aries and in the movie the woman falls prey to the man’s charms. A perfect mirror of our current astrology.

If we take a look at the natal charts of the two main protagonists in the movie, Dakota Johnson (b. October 4 1989) and Jamie Dornan (b. May 1 1982), we first notice that they’re both Venus-ruled Sun signs; Dakota has her Sun in Libra and Jamie has his Sun in Taurus. So far so good, there’s a Venusian link between the two. Yet dig a little deeper and you discover that they share a strong Mars/Neptune theme in their charts and it’s not an easy influence in either case.

Both Dakota and Jamie have identical Mars placements in the sign of Libra. Mars rules libido in astrology, it’s the planet of sexuality. Mars is in detriment in Libra, because Mars has to compromise in the sign of relationships and it can’t get what it wants without having to take someone else’s needs into account.

In Dakota’s chart, Mars is conjunct her Sun in Libra, a feisty, sexy and competitive combination and the Sun/Mars conjunction is a focal point in a T-square planetary pattern that involves a Saturn/Neptune conjunction in Capricorn  (potentially controlling) opposite an exalted Jupiter in Cancer (a protective influence). Jupiter is powerful here, the only planet in exaltation, and Jupiter expands what it touches. The closest planets in the T-square are Mars/Neptune/Jupiter all at 9 degrees.

Mars/Neptune hard aspects (square, opposition, conjunction) are notoriously kinky. Neptune is a boundless planet and allows Mars full rein. Yet Mars is easily lost and confused in Neptune’s realm. Boundaries merge and it’s hard to define where reality and fantasy begin and end.

Check out Jamie’s chart. Another powerful T-square dominates the chart with the lovers of the heavens, Venus and Mars, opposing one another and both square to the focal planet, Neptune. It’s a similar theme but this time with the love & relationship planets in opposition. Neptune dissolves the boundaries, attempting to redefine what love is. Surely this is what Fifty Shades of Grey is all about?

Jamie’s Venus is exalted in Pisces which shows he’s a romantic and yet is willing to explore, get lost in love and take love to its wider dimension as his close Venus/Neptune square demonstrates. Venus rules women in a man’s chart and Mars rules men in a woman’s chart and Dakota and Jamie share the Neptunian ‘eyes wide open’, romantic veil influence.

Neptune is the planet that dominates the whole ‘Fifty Shades of Grey’ phenomenon with the Pisces influence surrounding the premiere and the author/director’s mutual Sun signs, pus the Venus/Mars squares to Neptune in the actors’ charts.

If the dominant planet was Pluto, then the whole Fifty Shades phenomenon would be about abuse but it’s not Pluto, it’s Neptune and this is seduction. It’s a gentler influence than Pluto yet Neptune can leave us feeling confused, deluded, disillusioned. Seduced, yes, but not always in a good way. Neptune invites us to don the rose-coloured glasses but for many of us, that’s just not happening. 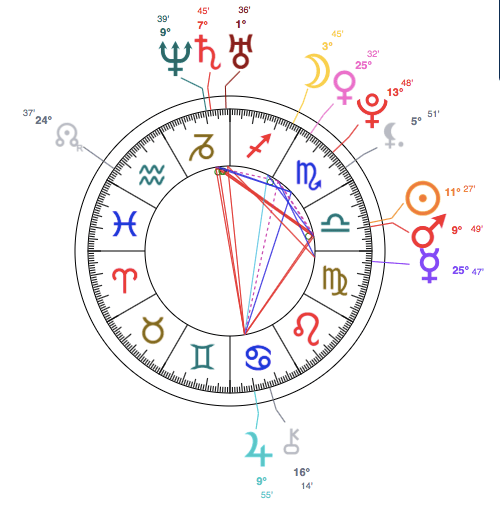 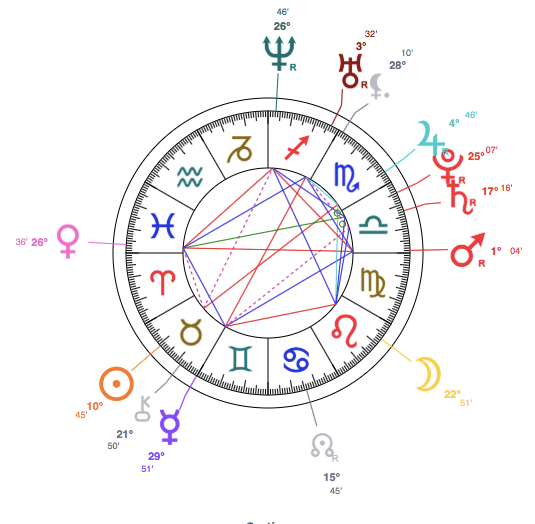