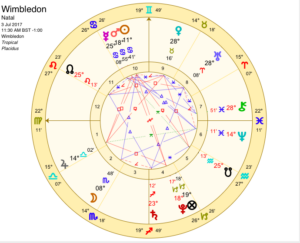 Update: The astrology worked beautifully for Wimbledon. Roger Federer had the best astrology of the Big Four/Five and a strong showing of Jupiter in Libra closely applying to sextile his Sun Leo was enough to win him a record 8th Wimbledon title in the men’s tournament. The Cancer theme of the chart suggested a ‘home’ win and, although he’s not a Brit, he remains a favourite of the Wimbledon courts.

In the women’s tournament, Garbine Muguruza (b. October 8 1993) took the title. The Mercury-Uranus square, the astrological signature of the tournament chart, indicated a new, young winner. Plus, it was Jupiter luck once again that predicted the women’s winner as her Sun is at 15 Libra, so transiting Jupiter was applying to a conjunction with her natal Sun, which happens once ever 12 years.

We’re back for another round of tennis, sunshine? and strawberries with the annual event at Wimbledon.

It’s been an unusual year so far in the Grand Slam tennis with two of the ‘old masters’ adding to their tally of Grand Slam victories: Roger Federer in the Australian Open & Rafa Nadal in the French Open.

Will it be another win at Wimbledon for one of the old school or will the young guns start to dominate?

Above is the chart for the start of the tournament and unlike last year’s astrology, Wimbledon 2016, this time it’s not a clear showing for the favourite. The planet that rules the Ascendant and Midheaven of the chart is Mercury, the planet associated with tennis, but it’s in emotional Cancer and not in its own preferred sign of rulership, Gemini.

Mercury will leave Cancer and move into a more confident placing in fire sign Leo on July 9th. Before it leaves Cancer however, it clashes with Uranus, the planet that often flags up surprises. There’s a ‘trickster’ theme to Mercury/Uranus connections. This could suggest a younger winner and it’s interesting that there’s little positive astrology amongst the Big Four (Five if you include Wawrinka).

Other pointers to note re. the astrology during Wimbledon. On July 9th, there’s a Full Moon at 17 degrees Capricorn which falls close to Pluto, the planet of extremes, at 18 Capricorn. Plus, the day before the tournament starts, Mars at 18 Cancer opposes Pluto at 18 Capricorn and the aspect remains strong in the tournament chart. This is intense astrology that could bring some spectacular turn-arounds.

Pluto has a reputation for being the ‘wipe-out’ planet. Many years ago when I was the astrologer for the Daily Star newspaper, I used to write astrology/football predictions. One of my best predictions was that Roy Keane would be sent off during the 1999 FA Cup final due to a stunning Pluto transit. He wasn’t sent off but within 8 minutes of the game, he was injured and substituted. Will Pluto themes be a factor at Wimbledon? We’ll soon find out.

Here’s a quick look at the astrology for the top 5 seeds, plus the Best of the Rest.

Andy Murray is the title holder at Wimbledon but he goes into the tournament with injury rumours. After winning 5 times at Queens in recent years, this year he was dumped out in the 1st round. His astrology doesn’t show strongly for Wimbledon either. Neptune at 14 Pisces is exactly conjunct his Descendant. The Ascendant/Descendant is about relationships on the one hand (Descendant) but it’s also about the physical body (Ascendant). So here’s the worry, the ‘will he, won’t he’ stay injury free.

Plus in Andy’s chart, Chiron, the wounded healer, is at 19 Gemini 40, almost exactly conjunct the Wimbledon chart’s Midheaven, the success point. The latest injury is to his hip, and in the body, the hip is ruled by Jupiter astrologically. Currently, Jupiter is at 14 Libra heading towards an opposition to his natal Jupiter at 17 Aries. So two planetary factors that flag up injury worries.

The only plus for Andy is a stunning progression between Mercury and Mars, both currently at 15 degrees Cancer. Yet this progression never actually makes exactitude because Mercury is starting to slow down in readiness for turning retrograde, i.e in retreat. Andy succumbed to his hip injury in week 2.

Novak’s progressed Sun is now in Cancer as it’s left behind the tennis sign, Gemini. Personally, I think it will be tough for him to get back to his competitive best until the progressed Sun reaches natal Mars, his career planet next year.

Looking for transits, nothing leaps out. His natal Mercury is at 18 Gemini close to the tournament chart’s Midheaven, success point and the Moon at 8 Scorpio in the tournament chart is conjunct his natal Pluto, close to his own Midheaven. Both minor testimonies. Add to this the fact that the Full Moon mid-tournament cuts across his Ascendant/Descendant at 16 degrees Capricorn/Cancer and this is weird astrology. Will he crash out or will he regain his obsessive desire to win? Novak did crash out in the 2nd week having to retire from a match with a shoulder injury.

Roger Federer has had an awesome 2017 so far. He’s won every event he’s entered, except for a blip at Stuttgart when he lost to Tommy Haas. He bowed out of the clay season, but let’s face it, Wimbledon is his favourite venue.

Astrologically the big progression that’s coincided with his return to form is Mercury (career planet) conjunct lucky Jupiter. He has this connection in his own natal chart as these two planets make a positive sextile aspect. The progression is starting to separate as Mercury is now at 14 Libra 34 and Jupiter at 14 Libra 08. Yet it’s still pretty close.

His natal Mars is at 13 Cancer so he’s just experienced his Mars Return, which takes place once every 2 years and is a burst of energy. Plus the Sun at 11 Cancer in the tournament chart is heading towards a conjunction with his natal Mars.

The only questionable planetary transit is Saturn at 23 Sagittarius which is almost exactly conjunct his natal Neptune at 22 Sagittarius. This might however be more about family/relationships than his tennis career. What stood out for me with Roger’s astrology was how the current transits were backing up his major Mercury/Jupiter progression. Jupiter by transit triggering his natal Sun/Mercury conjunction in Leo and transiting Mercury in Leo conjunct his natal planets during the tournament. This is often a strong testimony for success.

Rafa had some lovely transits during his French Open win a few weeks back, in particular Jupiter turning direct in an extra trine to his natal Sun at 12 Gemini and lively Uranus picking out his natal Mercury at 26 Gemini, his career planet.

Both transits are still active but wide and separating. In fact, there’s not a lot that leaps out in his astrology apart from the fact that his Venus is at 15 Cancer so the Sun and Full Moon will light up his love planet during the tournament. It doesn’t however seem to be about his tennis career, more likely money and love.

On the day of the final, Venus has moved to 12 Gemini exactly conjunct his natal Sun but without stronger astrology, it will be a big ask for him to benefit from this positive minor transit. Rafa produced the best match of the tournament, an epic 5 setter against Gilles Muller, a Sun Taurus. He proved once again that the’s the gladiator (Mars Capricorn – ruling planet) of tennis, although in the end if was the Taurus Muller who refused to budge.

Stan seems to do well at the French Open when the planet Uranus has dominated the astrology. Uranus is currently in Aries and Stan is a Sun Aries with two other key planets, Mercury and Venus, in the first sign of the zodiac.

He has some tricky astrology during Wimbledon. Saturn is exactly opposite his Moon at 23 Gemini 12 on July 3rd, the day the tournament begins. The Moon rules your inner needs and it’s his ruling planet. This Saturn transit feels uncomfortable. Plus Pluto is square to both his natal Venus/Mercury in Aries on July 14 and July 21. So it doesn’t seem to suggest that good fortune is on his side.

Best of the Rest (n.b. there are few accurate birth times for the up-and-coming tennis players)

Just like for the favourites above, I’m not seeing a lot of positive astrology for the other seeded players. Only a couple of the players have outstanding astrology.

Dominic Thiem is a Sun Virgo with a glorious Mars/Jupiter conjunction in Libra, Mars at 14 Libra 02 and Jupiter at 15 Libra 31. Look where Jupiter is right now and it’s exactly on Dominic’s Mars as the tournament begins and almost exactly conjunct his natal Jupiter on the day of the final. It’s his lucky Jupiter Return which happens once every 12 years.

The only question mark here is that his Mars/Jupiter conjunction makes a square aspect to a Uranus/Neptune conjunction both at 18 degrees Capricorn in his natal chart. This is where Pluto is currently located and the Full Moon on July 9th will light up this generational planetary aspect in his chart. This suggests he’s either going to storm this tournament or crash and burn.

His natal Venus is at 7 Leo close to the Midheaven of the chart for the Wimbledon final. He’s definitely one to watch but will it be Jupiter (good fortune) or Pluto (bad fortune) that triumphs over the other?

Feliciano Lopez was born the same year as Roger Federer. Another Sun Virgo, he’s just won at Queen’s on the run up to Wimbledon. He too is coming up for his Jupiter Return, although he’s 12 years older than Dominic Thiem.

Feliciano’s Jupiter is at 15 Libra 38 so Jupiter was honing in last week when he won at Queen’s and is moving closer to the exact conjunction. This doesn’t mean he’s a shoo-in to win at Wimbledon, but he does have the planet of good fortune, Jupiter, on his side.

Wimbledon has remained the domain of the Big Four, Roger, Rafa, Novak & Andy since 2002 when Leyton Hewitt won the coveted title. Out of the favourites, Roger Federer has the best astrology. I’ll be interested to keep an eye on some of the young guns too because of the tournament chart astrology.

Please do leave your comments and add anything further you see. It’s always extremely helpful for me to have other eyes on the astrology. Happy Tennis!