Update: The chart for the tournament clearly showed the favourite doing well, favourable Jupiter conjunct Ascendant, the rising sign, plus ruling planet Mercury in its sign of rulership Gemini in 10th house – career/success.

I went for no. 1 seed Djokovic but it was Andy Murray who held the trophy aloft with success planet Jupiter close to his Virgo Ascendant and the north node (destiny point) almost exactly conjunct his Ascendant on the day of the final.

It doesn’t seem two minutes ago that we were here looking at the astrology for the French Open and already the Wimbledon fortnight is upon us.

Astrologically, there are few major changes from three week ago but there’s always something interesting to consider, to see how the astrology plays out in real life. This time, Wimbledon coincides with action planet Mars turning direct on June 29th 2016 at 23 Scorpio 04 after 10 long weeks retrograde.

This is important for sports predictions because Mars is the planet most closely linked to athletes which makes sense because Mars rules speed and physical strength.

A French psychologist, Michel Gaugelin, famously undertook research in the 1950’s which became known as ‘the Mars effect’. This research showed a correlation with Mars close to the Ascendant or Midheaven in the natal charts of a higher-than-average number of sportspeople. (The Ascendant is the sign that was rising when you were born linked to the physical body, the Midheaven is the sign which culminates at the top of your chart linked to your destiny/success).

I’m not convinced this holds true for tennis players as it’s the planet Mercury, especially in its rulership of the sign of Gemini, which tends to dominate. Mercury rules dexterity, the hands, quick movements and co-ordination. I’m adding the information that’s relevant in this respect in brackets for each of the tennis players listed below. Most of the top tennis players have either a Sun/Mercury conjunction or key planets/angles in Gemini.

Back to Mars and its change of direction is going to be important at Wimbledon for any player who has planets or key angles at 23 Scorpio [see below]. To see how this can play out in the world of sport, here’s my article from 2012 when Wigan football club pulled off a major coup beating two top teams, Man United & Arsenal, to escape relegation. n.b. Mars turning direct happens approximately once every 2 years: Mars Turning Direct: Doing A Wigan.

The Wimbledon Chart (see above – if you want to see it magnified, click on the image)

This seems quite straightforward to interpret. Virgo Ascendant, so Mercury is the ruling planet of the chart and it’s in the 10th house (career/success) strong in Gemini, the sign linked to tennis players. Mercury also rules the Gemini Midheaven, the career/success point of the chart.

In tournament charts, the Ascendant is linked to the favourite. Lucky Jupiter is conjunct the destiny point North Node in Virgo and both sit on the Ascendant, another nod to the favourite. Mercury makes no more aspects before it changes signs so this can be interpreted as ‘nothing new will come of it’, i.e. we can’t expect to see a new title-holder.

The Moon is at 1 Aries 57 and makes numerous planetary aspects before its final sextile aspect to Mercury. Again picking out Mercury as the planet to note. The world no. 1 is, without a shadow of a doubt, Novak Djokovic, so without something extraordinary happening, the astrology points to another Grand Slam win for Nole.

I am linking here to my predictions on the Australian Open 2016 as it was then that I started to see the powerful planetary symbolism in Djokovic’ chart. I thought back in January that he was on course to win all four Grand Slams this year but at that time I hadn’t clocked that by winning the French Open 2016 he would already be the first man to hold all four Grand Slam titles since Rod Laver in 1969. An amazing achievement and if he stays fit, it is now a question of who can beat him.

It’s the natal potential in Djokovic’ chart which is so powerful. Mars, the planet, which rules his Scorpio Midheaven trine Pluto in Scorpio close to the Midheaven is a formidable and steely combination, ambitious & relentless. His astrology isn’t amazing this Wimbledon as Jupiter is no longer in close sextile aspect to his Midheaven, as it was at the French Open, but Mars turns direct at 23 Scorpio in his career sector and his own Mercury at 18 Gemini is close to the Midheaven of the Wimbledon chart at 14 Gemini. Minor testimonies but helpful nonetheless.

Andy Murray is probably starting to wonder why on earth he was born only one week before Novak Djokovic because he’s now lost to his nemesis in 5 out of 7 Grand Slam finals. Let’s not forget the brilliance of this UK player who did beat Djokovic to win the much-coveted Wimbledon trophy 3 years ago and led the UK to Davis Cup glory earlier this year.

Plus, in the run-up to this competition Murray became the first man to win 5 titles at Queen’s Club, the warm-up tournament to Wimbledon and he’s back with Ivan Lendl who coached him to the Wimbledon title 3 years ago. He’s doing everything right and yet his astrology isn’t leaping out. Lucky Jupiter remains close to his Ascendant, although it was more powerfully exact during the French Open, and Mercury in the Wimbledon chart is close to his natal Mars at 26 Gemini. A minor astrological nod to his success.

I can’t find stunning astrology in Lendl’s chart either but my heart is with Murray this competition and I would love for him to win his second Wimbledon title.

Lucky Jupiter is honing in on Federer’s 1st house Venus at 17 Virgo and will be exact on July 5th during the tournament. Plus Mars turns direct at 23 Scorpio between his natal Moon/Uranus conjunction in Scorpio. Both factors are positive but neither is directly related to his career planet, Mercury. Interestingly, it’s both the female planets which have the positive transits and Venus rules love and money. Good news for certain areas of his life.

These are little glimmers of hope for Federer fans but Saturn, the planet linked to injury, remains square his Ascendant as it was during the French Open. If anything, it’s an even tighter aspect during Wimbledon as Saturn is at 11 Sagittarius 24 and Federer’s Ascendant is 11 Virgo 01. No doubt he’ll prove to be a graceful player and will delight his fans once again but he doesn’t have stunning astrology to predict a win.

Nadal is out of Wimbledon and with his Sun at 12 Gemini 49, he is still experiencing his difficult Saturn transit by opposition which coincided with him pulling out of the French Open. Saturn is currently in his 1st house by transit which rules the physical body and Saturn has a way to go before it moves away. The last exact transit is on October 15th 2016 and Saturn only clears his 1st house completely in December 2016.

In addition, the recent Mars retrograde phase [April 17th-June 29th 2016] took place in his 1st house which added to the tricky astrology for him this year. Admittedly Mars does turn direct close to his Scorpio Ascendant so hopefully this will be a boost to his health and spirits even if he won’t be gracing the Wimbledon courts.

The Best of The Rest: (This is the section where I include any player whose astrology stands out during the tournament)

We need to be looking at the up-and-coming youngsters of tennis as the top four are now above 30 or not far off 30 and at 22, Thiem is one to watch. He’s won 4 titles already this year, has entered the world top 10 (seeded 8 at Wimbledon) and reached the semi-finals of the French Open 2016 when Jupiter was exactly conjunct his natal Mercury. A Sun Virgo, he still has Jupiter’s rays in his sign, although separating from his Sun at 10 Virgo and Mercury at 14 Virgo.

What he does have is Mars turning direct almost exactly conjunct his natal Pluto at 23 Scorpio 00. Pluto’s a tricky planet to interpret because it’s about extremes. It can indicate a wipe-out situation or amazing power. Interestingly, Thiem’s Moon is also at 1 Aries, the same sign/degree as the Wimbledon chart’s Moon so plenty going on for Thiem astrologically.

Berdych is now in his 30’s but seeded no. 10 at this Wimbledon tournament. He’s another Sun Virgo and Jupiter is applying to his Sun at 24 Virgo and Mercury at 19 Virgo. Jupiter is at 16 Virgo on June 27th, the start of the tournament and 18 Virgo on July 10th, the day of the final so astrologically this is good news for him.

There’s no time of birth for Berdych unfortunately but again Mars picks out an important planet when it turns direct as Berdych’s Saturn is at 23 Scorpio 41. Whether this is linked to his career is unknown as you need the time of birth to determine the houses of the birth chart (key areas of life). Saturn is sextile his Sun/Mercury combination, so again one to watch.

Another of the young guns, age 19, Zverev has been making waves recently as he beat Roger Federer on grass in the Halle semi-final last week. This victory moved him up the rankings and he’s now the youngest player to enter the ATP Top 30 since Djokovic in 2006. There’s no time of birth for Zverev but I’m including him in this list because his natal Mars is at 17 Virgo 05 so lucky Jupiter will be transiting his Mars during the tournament.

Another youngster, age 18, Coric has wins over both Andy Murray and Rafael Nadal to his name. No time of birth for him but with his Sun at 22 Scorpio 21, Mars will be turning direct on it. A lovely boost of Mars energy.

Incase it’s not obvious and without outstanding astrology for any of the main players, I’m sticking with the astrology for the tournament chart which clearly shows the favourite winning and that’s Novak Djokovic.

… for the astro-lovers, the chart for the men’s Wimbledon final is below. Here’s to a wonderful fortnight of tennis. 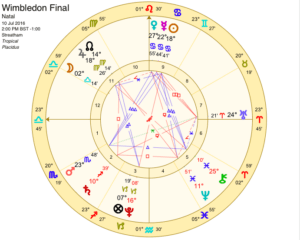