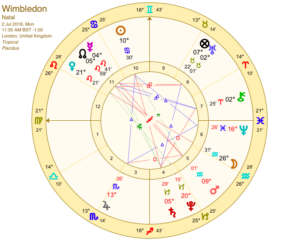 Update: Djokovic won his first Grand Slam since the French Open 2016. It was classic astrology – the planet of good fortune, Jupiter, turning direct on his Midheaven (success point) at 14 Scorpio. It was predicted some time ago that he’d be back to his best when his progressed Sun was conjunct his natal Mars, ruler of his Scorpio Midheaven, and it’s exact this year.

Angelique Kerber won the women’s final. She’s a Sun Capricorn and Jupiter was picking out a Mercury-Pluto square in her birth chart: Mercury at 13 Aquarius and Pluto at 12 Scorpio. You would expect Mercury to be linked to her career but with no time of birth, you can’t tell.

The tournament chart remains something of a mystery for Wimbledon this year. Usually, it can reveal a lot about the tournament but that wasn’t the case this time. Instead, it was lucky Jupiter by transit that coincided with both players’ success.

We are back for another round of strawberries and tennis at my favourite Grand Slam venue of the year, Wimbledon.

Roger Federer is the reigning champion and the no. 1 seed. Let’s dive straight in to see what the astrology for the start of the tournament can tell us (see chart left).

A couple of things leap out immediately. Firstly, the chart ruler and the planet which rules the Midheaven (success point) is Mercury. Plus, Mercury is conjunct the favourable north node in Leo. This often spells good news for the favourite.

Also, note the Moon in Aquarius void of course, which means it makes no more aspects before it moves into a new star sign. In horary astrology, this means ‘nothing will come of it’, i.e. nothing new, the situation won’t change. Looking at past tennis predictions, the favourite has won on the void of course Moon.

Two of these themes are repeated in the chart for the final (at bottom of article). The north node is conjunct the Midheaven and the Moon is once again void of course.

It’s likely too that Jupiter will play a significant role at this tournament because it turns direct on July 10th at 13 Scorpio 21. In fact, it only moves a few minutes throughout the tournament. Therefore, you would expect players with planets/angles close to 13 degrees of the water signs (Cancer, Scorpio, Pisces) and the earth signs (Taurus, Virgo, Capricorn) to do well.

There is also a New Moon or Solar Eclipse on July 13th at 20 Cancer 41. This could prove significant as eclipses are game-changers and can turn a situation around.

Finally, Mercury is heading for an opposition with retrograde Mars in Aquarius, exact on July 5th. This feels bad-tempered, combative even. If temperatures remain as hot as they are now, tempers could flare in the heat.

Let’s look at some of the players’ astrology. As always, I’m concentrating on the top 20 seeds, with a few exceptions. I only comment on the players who have astrology of note, whether positive or challenging.

Federer has been on a roll over the last year or so, winning the Australian Open 2017, Wimbledon 2017, the Australian Open 2018. If the pattern continues he’ll win Wimbledon 2018. He’s done this under some stunning progressions; Mercury progressed (the tennis planet and Federer’s chart ruler and career ruler) conjunct lucky Jupiter progressed. Also, Mercury progressed sextile Sun natal, which is still strong, although starting to separate.

During this tournament transiting Jupiter turns direct square his natal Mercury at 13 Leo 28. Square aspects aren’t necessarily a positive factor, although Jupiter can be fortunate, however it connects with your natal astrology. It’s also his Mercury Return, exact on July 9th, followed by Mercury conjunct his Sun Leo on July 11th. Nadal just won the French Open during his Mercury Return. Federer’s astrology looks promising.

Nadal is the no. 2 seed and he comes into Wimbledon after winning his 11th French Open tournament. Clay is Nadal’s speciality and the French Open always comes around when Gemini is strong and Nadal has both the Sun and fleet-footed Mercury in Gemini.

Not a lot leaps out astrologically during Wimbledon. Venus, one of the benefics, moves into Virgo on July 10th and will be conjunct his Midheaven, but this is a minor factor. The north node is conjunct his progressed Mercury at 5 degrees Leo, which could prove beneficial. However, Saturn is conjunct his natal Neptune during the tournament which can be a disorienting or disillusioned transit. It’s rarely positive and his astrology isn’t as strong as it was during the French Open.

Cilic beat Djokovic at Queens in the run up to Wimbledon and he’s the no. 3 seed. Astrologically, he’s something of a mystery and during Wimbledon he has Saturn exactly square his natal Sun-Mars opposition. Sometimes, this transit can help strengthen an opposition and Mars in Aries is where Cilic gets his competitive fighting spirit. Saturn can also stop you in your tracks and halt progress.

A minor factor, Cilic starts the tournament on his Venus Return, which can be lovely but not necessarily focused on his tennis. Cilic was born with Mars retrograde in his birth chart. It will be interesting to see whether players with this planetary alignment natally do better with Mars currently in retreat.

I had my eye on Zverev for the French Open because of an exact Uranus transit to his natal Sun Taurus, which often springs surprises. He played some epic five-setters and it’s fair to say he had a good tournament. Transiting Uranus has moved away from his Sun but retrograde Mars is conjunct his natal Uranus during the tournament (exact July 7th), when he could either play exciting tennis or crash out – Uranus is unpredictable!

Zverev was also born with Mars retrograde close to his Virgo Midheaven, using the 11:00 pm time of birth. His astrology doesn’t have the same vibe as it did in Paris.

If Dimitrov’s time of birth is correct, he has some interesting astrology lighting up his natal Saturn-Jupiter opposition, Saturn being the ruler of his Capricorn Midheaven. The karmic north node which bestows good fortune is close to his natal Jupiter at 6 Leo and retrograde Mars is transiting back to his natal Saturn, although not exact during the tournament. Basic symbolism about Jupiter and Saturn is about turning dreams into reality. You can harness the optimistic nature of Jupiter and combine it with the practial realism of Saturn. Will it be lucky or unfortunate for Dimitrov?

Also, transiting Jupiter turns direct on his Descendant, which may be more about love than tennis. Again, if his time of birth is correct. As far as I know, he is still with Sun Cancer girlfriend Nicole Scherzinger (b. June 29 1978). A propopsal or a parting of the ways? – Jupiter symbolises celebration but also freedom.

Thiem’s Sun is at 10 Virgo conjunct Mercury at 14 Virgo. Therefore, the Jupiter transit isn’t exact but Jupiter turning direct at 13 Scorpio does light up this natal conjunction in his birth chart. Mercury rules the hands, great for tennis players.

Djokovic hasn’t won a Grand Slam since the French Open 2016, when he held all four Grand Slam trophies at the same time. He does have a lovely progression which is nearing completion this year; progressed Sun conjunct natal Mars (exact on August 16th). This will help his competitive spirit and Mars rules his Scorpio Midheaven and we’re already seeing him win more matches.

Plus, Jupiter turns direct close to his Scorpio Midheaven at 14 degrees Scorpio. This is glorious and both the major progression and the Jupiter transit feel like a rebirth or reawakening of his winning ways. Admittedly, he still has Saturn square his Moon, exact a few days before the start of the tournament, which can sometimes play out as lack of confidence or feeling constrained. I hope to see Djokovic returning to form.

Murray may not even play at Wimbledon if he doesn’t feel fit and it’s a hip injury that’s kept him out of the game for some time. Jupiter rules hips and last year, 2017, Pluto was square Murray’s natal Jupiter for most of the year. A difficult transit. This transit has now moved on but it’s unlikely that he will be back to peak fitness for a while yet. There’s not a lot to add with regard to his current astrology.

I can’t find a lot of tennis players with key planets at 13 degrees Scorpio. Edmund has his lucky north node at 12 degrees Scorpio and Pouille is having his Jupiter Return. It’s not exact during the tournament but with his natal Jupiter at 14 Scorpio 37, that’s still a strong testimony.

I do think Federer’s got some good astrology again and the tournament chart points to the favourite doing well. I’ll also be interested in Djokovic’ progress.

I know there’ll be many of you asking about other players during the tournament and I look forward to hearing from those of you who know your astrology and your thoughts about Wimbledon. Bring on the tennis… 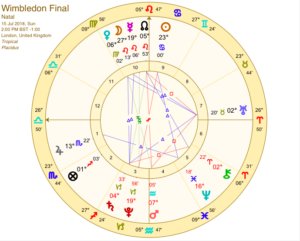