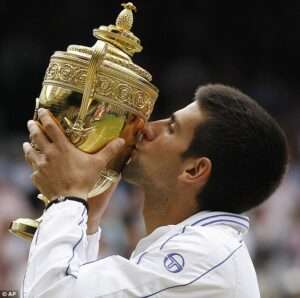 Update July 6th 2014: Thrilled that my prediction was correct and Novak Djokovic won his 2nd Wimbledon title. Plus Federer was my no. 2 and he played a stunning match in the final. Mercury Retrograde seemed to jinx both Andy Murray & Rafael Nadal as their fortunes changed once Mercury turned.

Two out of two for me – Djokovic to win Wimbledon 2014 & Nadal to win French Open 2014. If I’m going to stop predicting the tennis, I’m certainly going out on a high. Let’s see what the future holds…

So far 2014 has been a good year for my tennis predictions. Stanislas Wawrinka was one of my wild card picks who I thought was worth a punt at the Australian Open 2014 and I was right as he beat Rafael Nadal in the final. Then I chose Nadal to win the French Open 2014 and again a correct prediction.

Even the tennis tournaments leading up to Wimbledon have aligned with the astrology nicely as I’ve been saying for a while that I thought Roger Federer would have a stunning year in 2014. He won the Gerry Weber final on June 15th 2014  (see pic on left) and he’s become a father to a second set of twins and now has two girls age 5 and two boys born earlier this year.

I also picked out Grigor Dimitrov as one to watch this year and he won at Queens, again on June 15th 2014. Jupiter, the success planet, was in play in Dimitrov’s chart and applying to a conjunction with his natal Mars (exact on June 19th 2014).

The second is to look at the transits for each of the top player’s charts, i.e. timing. This means you check whether the (mostly good) planets in the heavens are triggering key planets in a player’s natal chart which is deemed lucky. Now timing isn’t a given, e.g. you have a fantastic Jupiter transit, therefore success will be handed to you on a plate. As most astrologers working today would agree, success is a mixture of fate and free will. You can’t win a top championship if you’re injured or your motivation is lacking but when you have ‘lucky stars’, you go all out to make the most of them. 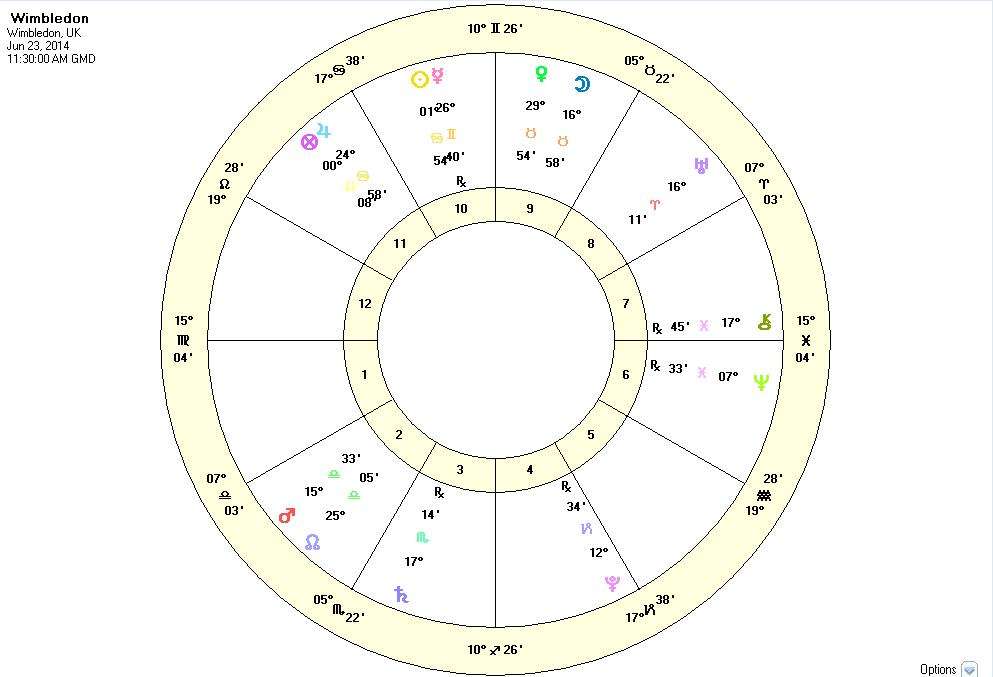 Mercury is a powerful planet in the chart as it rules both the Ascendant and the Midheaven and although it’s in Gemini, the sign most closely associated with tennis, Mercury remains retrograde as the tournament begins. It’s also void of course, i.e. it makes no further aspects before it turns direct at 24 Gemini 23 on July 1st 2014. It has to be said, this is tricky to interpret but I suspect that things may not go according to plan throughout the tournament. There may be more disruption than usual or problems with ticket sales/transport and even some freak weather.

Both Rafael Nadal and Andy Murray  have key planets at 26 Gemini: Andy’s Mars, the competitive planet, is at 26 Gemini 22 in his 10th house ruling his career and Rafael’s Mercury is at 26 Gemini 19. What’s really interesting about this is that on the day of the final, July 6th 2014, (see below for the Wimbledon final chart) Mercury at 25 Gemini 25 is returning to the same point in the heavens and is within 1 degree, i.e. within orb of their respective planets.

I can’t see this is good news for either player as Mercury retrograde caught out Novak Djokovic in the French Open tennis final on June 7th 2014 (see my recent article – Astrology of the French Tennis Open 2014). There’s often an ‘about-turn’ theme when Mercury is retrograde and there are rarely any guarantees.

You then consider the Moon and see what’s happening with her. The Moon is in Taurus, a safe harbour, and is applying to an opposition with Saturn. This can be interpreted in different ways, e.g. it may favour the older player (Federer?) or the established top four or it may be a boring Wimbledon (heavens forbid!).

The Moon’s next aspect is a sextile to Jupiter in Cancer, it’s last aspect before it leaves Taurus which is always significant. I wonder whether this gives a nod to the favourite and the no. 1 seed at Wimbledon is Djokovic. Plus the chart for the final has Jupiter slap bang on the Midheaven (see below) and again I suspect this points to the favourite.

The only question mark with Djokovic is whether his wrist is pain-free. He had to pull out of the Boodles tennis tournament which ran from 17th-21st June 2014 and this coincided with Uranus square his Ascendant by transit, exact on June 18th 2014. The Ascendant rules the physical body and Uranus is often a date-specific transit. I hope he’s fit because I think it’s his turn to win. He’s had so many runner-up spots over the last two years whilst Saturn has been in Scorpio, the sign on his Midheaven, and I would love for him to finally beat an opponent in a Grand Slam final.

Djokovic’ favourite surface isn’t grass and of course it benefits the grass court maestro, Roger Federer. As some of you know, I am a huge Federer fan and it was thanks to Roger (and an even bigger Federer fan, my friend Bianca) that my tennis predictions began in Wimbledon 2012. The astrology for Federer’s win at Wimbledon 2012 was stunning; Jupiter applying to a conjunction of his Gemini Midheaven on the day of the Wimbledon final.

It was only part way through the tournament that I realised that Murray had almost exactly the same Midheaven, although 1 degree later. As it transpired, they both reached the final but Jupiter reached Federer’s Midheaven first and he won.

Federer has some lovely astrology this year as mentioned but it’s slightly frustrating that the best astrology doesn’t coincide with the Grand Slam tournaments. I would love him to win Wimbledon one last time but with no stunning astrology for any of the big Four, I think the astrology favours the no. 1 seed so my prediction for 2014 will be Novak Djokovic. Let’s hope his wrist holds up and he can conquer the grass courts of Wimbledon!

Here’s the chart for the Wimbledon final: 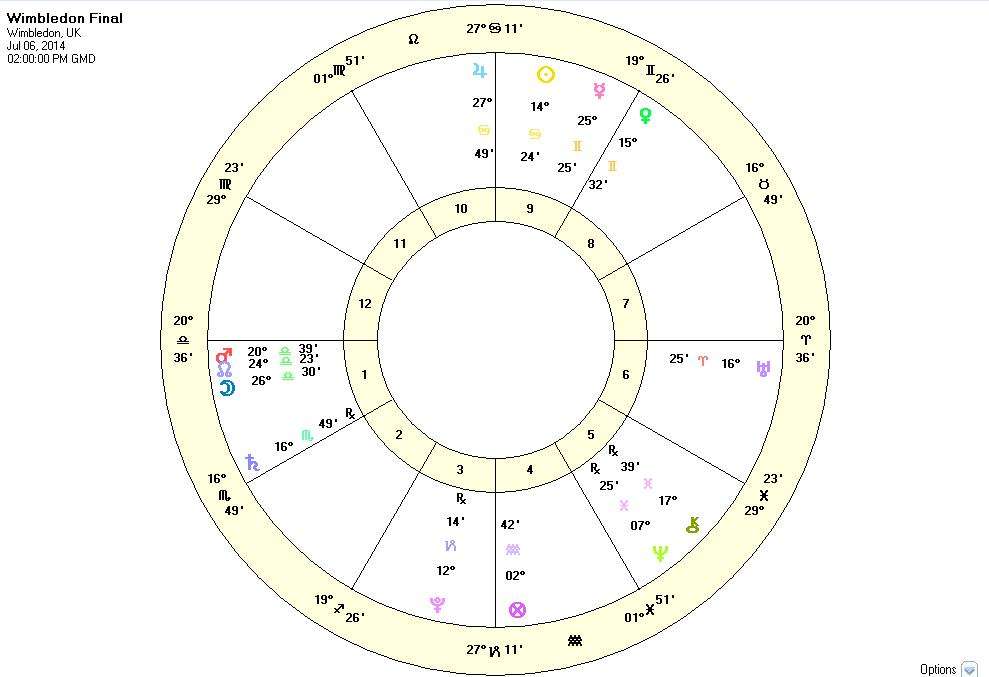 Note also the Mars-Uranus opposition cutting across the Ascendant/Descendant axis of the chart. Mars/Uranus aspects have a similar feel to Mercury retrograde and you can’t count out injury/accidents marring the tournament. The plus side of Mars/Uranus is a super-aggressive final and he who fights hardest wins.

Bring on the tennis!

p.s. I haven’t had chance to check out other tennis players’ stars for Wimbledon. If I see anything outstanding, I shall post it in the comments section below.