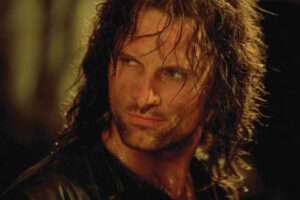 My first thought was that I would post a photo of Viggo Mortensen as Aragorn in the Lord of the Rings trilogy and leave it at that. But as I’m trying to make an astrological point here about why I love Viggo Mortensen, I shall continue.

It is well known to my other half that I’ve had a bit of a crush on Viggo since I first saw Lord of the Rings at the cinema 10 years ago. We watched one of the films again on TV a few weeks ago and he still has a pleasing effect upon me. He is, however, a chameleon-like actor and he doesn’t do it for me in the same way in his other film roles, in Hidalgo or A History of Violence, for example . No, it’s the way he looks when he plays Aragorn that ticks all the right boxes.

We all have film or celebrity crushes at one point or another in our lives (at least I’m presuming we do and I’m not a complete oddball!). But have you ever wondered why a certain actor or pop star or politician or other famous person just does it for you? This is where astrology can be breathtakingly brilliant as 9 times out of 10 you and your “crush” will have synastry between your charts, which means that key planets in your own chart sit on key planets in their chart. Oo-er missus…

This makes sense as the planets in your birth chart represent different drives, needs and urges and can reveal a lot about what makes you happy in life. Here’s Viggo’s chart and I’ll explain more about what I mean. In his chart, Viggo has the Sun next to Venus in Libra, the sign of beauty and art. He has a three planet conjunction in Scorpio and this includes Mercury (communication), Neptune (creativity & the visual world) and Jupiter (which expands what it touches). It may be no surprise to hear that Viggo is a polyglot and speaks or understands 6 languages, plus he is an author, poet, painter and photographer, in other words your modern Renaissance man.

In my own chart, I have the Moon at 24 degrees Libra and conjunct Viggo’s Sun at 26 Libra, the classic “cosmic marriage” connection. Now I’m not saying Viggo and I should get hitched but in astrology the Sun and Moon complement each other, they are yin and yang, and there is often a strong attraction.

The Moon rules my emotional needs and the Sun fulfils those needs. In a woman’s chart, the Sun, being the masculine principle along with Mars, often represents the type of man she’s attracted to. It’s interesting that in astrology the Sun and Moon symbolize the King and Queen of the heavens and here I am attracted to Viggo as Aragorn, who of course becomes King.

There’s another connection too between our charts as Viggo’s Neptune at 4 Scorpio is conjunct my own Sun at 3 Scorpio. Here’s the idolisation, my dream (Neptune) man (Sun), and of course I loved the discovery that Viggo’s not only an actor but a poet and artist as well. It’s a fantasy crush and a purely hedonistic escape from reality but one that makes me very happy.

So that’s why I love Viggo Mortensen but who’s your movie idol, your secret crush? Have you ever wondered whether there’s a deeper reason for the strong attraction? Maybe astrology has the answer for you.