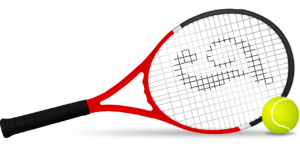 Gemini is the sign of communication ruled by fleet-footed Mercury and Geminis are quick, witty, fun and curious about life.

Each Star sign represents a part of the human body and Gemini rules the hands. This is the sign of dexterity and many Geminis run on nervous energy and find it hard to sit still. They use their hands to express themselves and are often extremely talented at sports which involve good hand-to-eye co-ordination.

Tennis is one such sport and it’s believed that tennis originated from a game played in the 12th century in France called ‘jeu de paume’ which translated into English means ‘game of the palm’.

It’s no surprise therefore to discover that many great tennis players are born under the Sun sign Gemini as you need excellent racquet skills to be a top tennis player. Sun sign Geminis include Steffi Graf (b. June 14 1969), Bjorn Borg (b. June 6 1956), Venus Williams (b. June 17 1980) and Anna Kournikova (b. June 7 1981).

Plus two players who have dominated Grand Slam tennis tournaments in the last few years, the Spaniard Rafael Nadal (b. June 3 1986) and the Serbian Novak Djokovic (b. May 22 1987).

Brit Andy Murray (b. May 15 1987) was born exactly one week before Novak Djokovic in the same year but Andy’s a Sun Taurus and the Swiss Roger Federer (b. August 8 1981) is a Sun Leo. There is a Gemini theme however as there are accurate birth times for both players. When you draw up the natal chart, you see they both have the sign of Gemini on the Midheaven, the point in the chart which represents your career, your vocation and ultimately success.

In the Wimbledon final in 2012, there was an intriguing battle of the Gemini Midheavens when Roger Federer took on Andy Murray. This was big news for Britain as Andy Murray was the first British man to reach a Grand Slam final in over 70 years and the hearts of the country were willing him to win. Roger Federer wasn’t going to back down easily however. If he won, he would equal Pete Sampras’ record of 7 Wimbledon titles, an amazing feat.

On the day of the final Jupiter, the planet associated with good fortune, was at 6 Gemini so about to peak in both men’s charts and transit over their Gemini Midheavens. Astrologically, this was the perfect final but who would win and grab success?

Progressions are a symbolic form of timing in the astrological chart and relatively slow-moving. This was the signpost to a major astrological event in his chart, backing up his momentous achievement.

Another planet that’s key in the charts of tennis players is Mercury, which is Gemini’s ruling planet. The condition of Mercury by sign, house and aspect can tell you a lot about your ability to use your hands well. Mercury is the planet that rules the mind and it also indicates how able you are to think on your feet and respond swiftly.

Mercury is dignified in Gemini as it rules this quick-moving sign so you would expect a good number of tennis players to have this placing. Here are a few of them: Fred Perry (b. May 18 1909), the last British man to win Wimbledon before Andy Murray in 2013, Novak Djokovic, Rafael Nadal, Bjorn Borg, Steffi Graf and our very own Andy Murray.

There are always exceptions to every rule and even though it’s obvious that Geminis make exceptional tennis players, there’s one other star sign that stands out from the rest and that’s Leo. Here are three Leo tennis superstars: the Australian Rod Laver (b. August 9 1938), who won 200 singles titles in his career, a record that’s unlike to be beaten; the American Pete Sampras (b. August 12 1971) and the Swiss Roger Federer (b. August 8 1981).

It makes sense that Leos excel on the tennis court as tennis is not only about hand-to-eye coordination especially when you’re playing at competition level. In order to play and win tennis at the highest standard, you need to be supremely self-confident, have a big ego and enjoy taking centre stage.

These are all qualities that are typical of a Sun Leo and perhaps it’s no coincidence that at Wimbledon the main tennis court is fondly known as ‘Centre Court’, the perfect arena to do what Leos do best and be centre of attention

Leos want to be the best and as Leo Roger Federer was quoted as saying: “When you do something best in life, you don’t really want to give that up – and for me it’s tennis”. Leos and all the fire signs (Aries, Leo, Sagittarius) have a positive attitude which you must embody if you’re going to show strong self-belief and the mental capacity to keep winning.

If you want to delve further into factors in a natal chart that determine exceptional ability in sport, then look for the placing of planets that indicate physical and mental strength. You need to be physically fit, stay calm under pressure and be a consistent player to remain at the top.

Mars is key in the charts of sports people in showing physical ability and Mercury reveals the state of your mind. The research of astrologer Michel Gaugelin suggests that statistically more sports people have their Mars close to the Ascendant or Midheaven. Plus planets in Scorpio also help to deliver focus and strong willpower.

A good example is Gemini Rafael Nadal who was born with Pluto, Scorpio’s ruling planet conjunct his Scorpio Ascendant, and his co-ruler Mars dignified in Capricorn, in it’s own sign of rulership. This is a powerful combination which suggests steely determination and he’s clearly a fighter on the tennis court, refusing to give up and even coming back from a serious knee injury. When it comes to tennis, Rafael Nadal is the gladiator.

Another lovely showing of Roger Federer’s Gemini Midheaven is the fact that he’s now father to two sets of twins, the Gemini zodiac symbol. His twin girls were born in 2009 and his wife Mirka gave birth to twin boys on May 6th 2014. The boys are called Leo and Lenny, perfect names for a Sun Leo father, symbol of the lion.

When he was interviewed shortly after the birth of his twin sons, Roger Federer said: “This is the best time of my life”. Tennis and two sets of twins = double joy for Sun Leo/Gemini Midheaven Roger Federer.