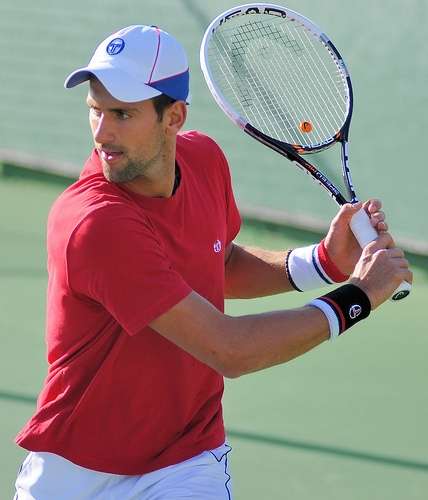 [Update: 27th January 2013. Firstly, the favourites did win with both Djokovic and Azarenka, no. 1 seeds, coming out on top, so my prediction was wrong.

There was a surprise twist, however, with the bookies’ favourite, Serena Williams, being knocked out by an unseeded 18 year old.

Secondly, Djokovic’ win confirms that Jupiter retrograde is not as strong as Jupiter direct when Federer won Wimbledon (see below).

Thirdly, after writing this blog, a new birth-time was discovered for Djokovic (11:00am) which gives him a Leo Ascendant, Venus conjunct a Taurus Midheaven and Jupiter currently in his career sector. This significantly boosts his chances for 2013.

I will post predictions for the remaining three Grand Slams closer to the events and thank you to all of you who have read this post and/or commented on it. Your input is valuable and I hope you continue to enjoy sharing our mutual tennis/astrology appreciation.]

Original post. The blog post I wrote in March 2012 predicting that Roger Federer would win Wimbledon was the most popular blog post of 2012. I’m picking up the gauntlet again this year and will write predictions for the four tennis Grand Slams, the current Australian Open, the French Open, Wimbledon and the US Open.

I’m not going to make predictions for the women’s tennis as I didn’t fare so well last year, although I expect I will make an exception for Wimbledon which is my favourite tournament.

This time I’m starting by drawing up the chart for the first match of the tournament to see what the astrology shows and will use this information in tandem with the players’ personal horoscopes to make my prediction. I also consider the astrology on the day of the final. Here’s the chart for the start of the Australian Open in Melbourne, Australia. The first thing to note is that the Moon is void of course. This means that it makes no more aspects before leaving Aquarius and moving into the next sign. In traditional astrology, this was a bad omen and it suggests that the favourite will not fare well. The no. 1 seed is Novak Djokovic who’s going for his 3rd consecutive Australian Open title, a new record. Will this fact add extra pressure to Nole and make the defence of his title a tougher ask? If Novak’s not the winner, who has the best chance astrologically?

The Ascendant of the chart is Pisces so traditionally the ruling planet is Jupiter at 6 Gemini 47 down at the base of the chart. Jupiter’s currently retrograde, i.e. on go slow, but Jupiter also rules Sagittarius, the Midheaven (success) point of the chart. Jupiter is the lucky planet whose many gifts include faith, belief and good fortune so this is definitely a planet to note.

Jupiter makes no significant aspects before turning direct on January 30th but what’s really interesting is how close it is to the same place it was in the heavens when Federer won Wimbledon on 8th July 2012. On that day, Jupiter was at 5 Gemini 51, the only difference being that back then Jupiter was direct (strong) and it’s currently retrograde (weak).

The main reason for my prediction that Federer would win Wimbledon was because his Midheaven (success) point is at 6 Gemini 09 and Jupiter was almost exactly conjunct the Midheaven. It was only later that year that I discovered Andy Murray’s birth time which showed his Midheaven point spookily close to Federer’s at 7 Gemini 46. However, Jupiter reached Federer’s Midheaven first, giving him the advantage.

There is one other chart that piqued my curiosity and that belongs to Juan Martin del Potro, the no. 6 seed. del Potro won the 2009 US Open but he had to retire from most of the tournaments in 2010 due to a wrist injury. I don’t have his time of birth but his natal chart shows that this is the year of his Jupiter return and his natal Jupiter is at 6 Gemini 08 sextile Mars in Aries, the action planet that rules competitive sport. Uranus, planet of surprises, is very close to del Potro’s Mars which is at 6 Aries 34 natally and, in the chart above, Uranus is in the 1st house, which often favours an outsider, a surprise victory or turn-around of events.

So what does this mean for the Australian Open especially as one half of the draw includes Roger Federer (no. 2 seed), Andy Murray (no. 3 seed) and Juan Martin del Potro (no. 6 seed)? As they all share this magical connection at 6 Gemini, it looks as if the matches between them are going to be crucial to the tournament’s outcome.

Can Roger Federer, age 31 and winner of 17 grand slams, compete against the young guns in what has been one of the hottest summers in Australia for some time, even if he has been resting and taking it easy? It would be a massive ask and my head says it’s impossible.

On the day of the final, however, Jupiter is at 6 Gemini 21 and there’s a Full Moon in Leo, Roger’s natal Sun sign. Admittedly he has to get to the final to shine in the brilliance of the Full Moon but to stay true to the astrology and Jupiter in the sign of the twins, I’m putting on two bets, one on Federer to win and a second bet on del Potro to win. Bring on the tennis…