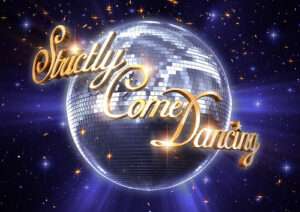 Strictly Come Dancing has been my not-so-guilty pleasure for many years now and I adore the show. Halfway through the last series I made my predictions for the top 3, citing Harry & Aliona, Jason & Kristina and Holly & Artem as my choices.

In the end, Chelsee & Pasha pushed Holly & Artem out of the final but I was happy with 2 out of 3 and especially happy that Harry won, as he was my personal favourite. You can link directly to last year’s article here.

This year, I thought I would take a look at the astrology chart for the start of the programme to see what it would reveal about the Strictly stars and who looks likely to win the coveted glitter ball. There was a preview programme when the celebrities met their dancers but I drew up the chart for the start of the first show on Friday 5th October 2012 at 9:00pm. Here’s a list of the remaining 9 couples ‘in no particular order’ (sic) showing their respective star signs: Immediately, you see the Moon/Jupiter conjunction very close to the Ascendant point and the Moon is always important when you look at a chart to predict the outcome of events. It’s the fastest moving body in the heavens and the connections between the Moon and other planets are key to the prediction. This is the Moon’s next aspect and as Jupiter is the lucky planet on the Ascendant, this suggests good fortune for the favourite. This is confirmed as the Sun rules the 5th house, associated with luck and contests, and the Sun’s next aspect is also a trine to Jupiter. This points to Louis Smith, the Olympic gymnast, who has been the favourite from the start.

Another important planet to consider is the ruling planet of the chart which in this case, because of the Gemini Ascendant, is Mercury in Scorpio. This fits the symbolism for Louis, as Mercury rules the arms and hands and being the planet of communication in steely Scorpio, it signals mental precision and agility. You might expect to see Mars, the athlete’s planet, for a gymnast but Scorpio is the sign ruled by Mars and no doubt gymnastics requires equal amounts of physical power and mental strength. Mercury’s next aspect is to Neptune in Pisces, a romantic and enchanting combination, and Louis is paired with Flavia, herself a Pisces.

The chart also points towards Denise and James. The Moon on the Ascendant rules women and Gemini is Denise’s sign. Her Gemini Sun is at 5 Gemini 47 but this is not close enough to the Ascendant/Moon/Jupiter combination to favour her as the winner. In addition, the eclipse on November 28th 2012 is at 6 Gemini 47 which falls on Denise’s Sun and suggests a dramatic turnaround of events. Last week, Denise was training with Ian for a short while so perhaps this will happen again and she will have to split her training between two male dancers, which would fit the Gemini theme of doubling up.

Last night’s show also brought a shock result when Scorpio Kimberley found herself in the bottom two after being awarded joint second highest score from the judges. Her Sun is at 28 Scorpio 05 conjunct Mars and the North Node in the chart of the opening show. I drew up the chart before last night’s results show and initially I thought the powerful Mars Scorpio/North Node combination pointed towards Kimberley as another contender. However, it may be that Mars on her Sun “cuts” her out of the running, even though she’s currently one of the top dancers.

Notice too in the chart that Saturn is at 29 Libra 60, in other words, it’s right at the end of the sign of Libra and about to enter Scorpio, exact at 9:34pm BST. Saturn rules the Midheaven of the chart, so one of the two Librans, Victoria or Nicky, may emerge as a late favourite to take the glitter ball.

There’s also talk of Dani Harmer being the dark horse of the show. Dani is a Sun Aquarius and her Venus is at 5 Aquarius 59 linking her directly to the Midheaven and the success point of the chart.

I shall stick to my gut instincts, however, and my prediction for the final three are Louis & Flavia, Denise & James and… Lisa & Robin. Lisa’s proved that big ladies can dance and I love the symbolism of the Moon/Jupiter on the Ascendant for Lisa. Jupiter, the planet of good times, is the biggest planet in the heavens and smiley Lisa definitely brings the fun factor to the dance floor.