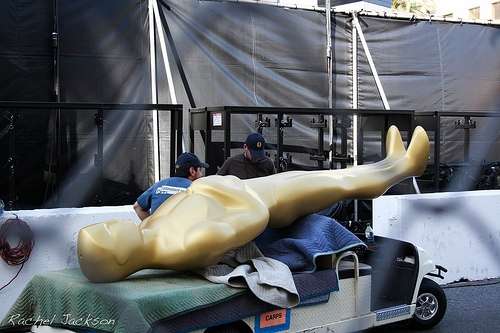 The Oscars are here and this Sunday

Update 25th February 2013: The results are in & very intriguing too. Leos did well, notably Ben Affleck winning for Best Film with Argo and Jennifer Lawrence winning the Best Actress award at the tender age of 22. She tripped & fell on the stairs (oops, Mercury retrograde?!). The North Node in Scorpio proved powerful for Taurus Daniel Day Lewis winning Best Actor and Scorpio Anne Hathaway winning Best Supporting Actress (see below). Day Lewis also made history by being the first actor to win the Best Actor award three times (Jupiter in Gemini on the Oscar’s Midheaven). Finally, there were the Librans, Christoph Waltz winning Best Supporting Actor and Ang Lee winning Best Director. Sadly I didn’t have birth times for either of them which didn’t help the predictions, although they were both in strong categories.

24th February 2013 is the 85th Academy Awards celebrating the best of the magical world of film. Same as last year, I aim to predict the winners of the Oscars using astrology. In 2012, four out of my six predictions were correct and you can read my reasonings behind the winners in my previous article Dreaming about the Oscars.

Let’s start by taking a look at the chart of the Academy Awards ceremony to see what planets and signs dominate and what to look out for: The first thing we notice is that with a Virgo Ascendant and a Gemini Midheaven, Mercury in Pisces is the planet to note and… it’s just turned retrograde. What does this mean for the Oscars ceremony with Mercury, planet of communication up to its tricks? It could show as the wrong name being read out, an emotional winner who can’t talk but can only cry (Pisces being one of the water signs) or a problem with the televised screening of the ceremony.

The Sun is in Pisces as it is every year, fitting for a ceremony that celebrates film and the boundless world of cinema. Neptune dominates again this year as there’s a Sun/Neptune conjunction on the Descendant. This may benefit Pisceans and Geminis (Pisces rules Gemini’s 10th house of success) but more significantly it describes the whole Oscars experience. The Oscars are a celebration of film; film unites people, it’s visually exciting & has the ability to portray emotional & dramatic events that satisfy our mutual desire to laugh & cry & be amazed. It’s unadulterated escapism.

The Sun is square to Jupiter in Gemini, close to the Midheaven. Jupiter’s the planet of success and excess, perfect for grand gestures and over-the-top behaviour. As Jupiter’s in Gemini, the sign of the twins and multiplicity, we may see a tie this year with two winners in one category as happened back in 1969 or nominees doing well who’ve won an Oscar before.

Finally, the Moon is in the sign of the performer, Leo, so watch out for the Leos roaring loud and stealing the show. This is another sign that could peak on Sunday night. Whose birth chart promises success? (I have listed the nominees in betting order on the day this article’s posted, i.e. the favourite at the top of the list):

There’s not a lot of stand-out astrology for the best actors this year and sadly there’s no birth time for the hot favourite to win the Best Actor Award, Daniel Day Lewis. Hugh Jackman does have Saturn conjunct his Midheaven which could predict a defining moment in his career but on its own, it’s not enough. What does confirm that astrology is pointing towards Day Lewis to walk away with the award is the fact that his natal North Node is at 20 Scorpio 26. On the day of the Oscars, the karmic North Node is at 20 Scorpio 41 so this is Day Lewis’ third Nodal return, often described as a significant moment of destiny. Plus the Moon at 27 Leo 05 is conjunct Day Lewis’ Pluto at 27 Leo 57 which is sextile his Mars in Gemini. If we knew his birth time, I suspect we’d find that these two planets are linked to his Midheaven (success point) in his chart.

This year the best actress nominees include the oldest- and youngest-ever nominees in Emmanuelle Riva (age 86) and Quvenzhane Wallis (age 9). This is especially remarkable for Emmanuelle Riva, who was born before the Academy Awards began in 1929 and whose birthday is on the same day as this year’s awards. She is a Sun Pisces and this means she’s having her Solar Return (when the Sun returns to the place it was when you were born) this Sunday. In her chart, the Sun is conjunct Jupiter, planet of success in the 7th, plus she has Jupiter currently transiting, i.e. moving, through her 10th house of success. She has five planets in Pisces and Neptune, Pisces’ planet, at 25 Leo 21 conjunct her Ascendant, close to where the Moon is at 27 Leo 05 on the day of the awards. She’s got to be a strong contender to walk off with the Oscar. Jessica Chastain is a red-headed Sun Aries (Aries’ planet Mars rules the colour red) and Uranus, planet of surprises recently transited her Sun which is at 4 Aries 04. Neptune is also applying by conjunction to her Mars in Pisces at 3 Pisces 42 so she’s definitely going to appeal to some of the voters. With no birth time to back up these planetary aspects, I suspect the fact that Saturn is almost exactly on her natal Uranus at 11 Scorpio 10 means this counts her out of the running. The favourite Jennifer Lawrence is a Sun Leo and we know that the Moon is in Leo on Oscars night, although slightly wide. However, there’s not enough current astrology to excite me about her chart which is why I’m swayed by the romantic choice to win.

This category is so close that any of the five nominees could win. Alan Arkin has his Sun at 5 Aries 02 so transiting Uranus is still within a 2 degree orb and could bring a surprise victory. Christoph Waltz has his natal Venus at 28 Leo 06 sextile Neptune in his chart and the Moon picks out Venus on the day which favours (Venus) his film role (Neptune). Tommy Lee Jones has a Gemini Ascendant which is close to the Midheaven point of the Oscars chart and transiting Jupiter (success) is in his 1st house. His natal Neptune is at 7 Libra 46 so Jupiter at 7 Gemini 25 is in a very close trine (harmonious) aspect with the planet of film & glamour. Philip Seymour Hoffman is a Sun Leo, although in the early degrees of the sign so not close to the Oscars’ Moon whereas Robert de Niro has his Sun at 23 Leo 30, closer to the glorious Moon on Oscars night. What’s especially exciting about de Niro’s chart is his natal Uranus, planet of surprises, at 8 Gemini 30 with transiting Jupiter applying in a very close conjunction at 7 Gemini 25. In addition, natally Jupiter rules his Midheaven (success point) and in his chart Jupiter is at 10 Leo 24 next to Pluto at 7 Leo 20, so Jupiter is also in a very close sextile (harmonious) aspect to this point. This sways it.

This is a strong category and all five nominees have exciting astrology on Oscars night. Jacki Weaver is an early degrees Sun Gemini with her Sun at 3 Gemini 22 conjunct her natal North Node. This is promising as it links to the Midheaven of the Oscars chart but Jupiter, the success planet, is separating from the pair and slightly wide. Sally Field is a wonderful actress who has won an Academy Award twice before. Her career planet is the Moon at 3 Aries 08 and Uranus is separating from it, a possible surprise win, plus Jupiter (success) is also applying by trine to Saturn in the 10th, making her a powerful contender. Amy Adams has her Sun Leo at 27 Leo 01 and the Oscars Moon is 27 Leo 05 which highlights her talent. No birth time, however, so we don’t know where the Sun lies in her chart. She also has a beautiful Venus/Neptune trine with Venus at 6 Leo 38 and Neptune at 6 Sagittarius 51 and transiting Jupiter (success) contacts these planets too. Then there’s the second Gemini, Helen Hunt and this would be her second Oscar if she won. Her Sun at 23 Gemini 59 is on her Midheaven (success point) mirroring Jupiter on the Midheaven in the Oscars chart. Her career planet, Mercury is conjunct Venus at 3 Gemini 39 conjunct the Oscars Midheaven and Jupiter is separating from this pair by conjunction. Plus she has her Moon at 6 Aries 33 and transiting Uranus is at 6 Aries 43 on the night. It’s brilliant astrology for a surprise winner but you can’t count out the favourite Anne Hathaway. With a Libra Midheaven, her career planet is Venus which sits next to Jupiter, the lucky planet, and the Sun. It’s a stunning trio of Scorpio planets. Here we’re back to the symbolism of the karmic North Node. Hathaway’s natal Venus is at 21 Scorpio 59 and Jupiter is at 20 Scorpio 39. On Oscars night, the North Node is at 20 Scorpio 41, tantalisingly close to success planet, Jupiter. So it’s the North Node versus stunning traditional astrology for Helen Hunt. I just wonder whether this category is where we might see a tie? My heart’s with Anne Hathaway and my head’s with Helen Hunt. Heart wins.

This category is made very tricky to predict by the fact that I only have the birth time for one of the four nominees and that’s Steven Spielberg. He’s a Sagittarius with a Pisces Midheaven and he has some nice astrology on the night but nothing definitive. Michael Haneke has his Sun at 2 Aries 09 so Uranus is wide and separating. His Mars, the passion planet, is at 9 Gemini 33 and Jupiter is applying to it by conjunction and almost within a 2 degree orb. His film is Amour which fits the passion theme. Ang Lee is a Libran with Neptune conjunct his Sun and this is his second Saturn return, a defining moment. I’m confident the Oscar will go to one of these three and my heart’s pulling me towards Michael Haneke although I suspect Steven Spielberg will win making this his third Academy Award for Best Director. The astrology’s not convincing but with so few birth times that’s understandable.

This is a quick look at the best film. With the ruling planet being a retrograde Mercury and the Sun/Neptune conjunction on the Descendant, I do wonder whether this benefits Les Miserables, the film with no words effectively (Mercury retrograde), only song. An epic film with vast themes that makes viewers sob, it feels very Piscean. Life of Pi, is set on the sea (Neptune being God of the sea) and touches on themes that explore faith and spirituality, very Neptunian. I also took a glance at Abraham Lincoln’s actual birth chart. He had Sun Aquarius on the Ascendant, wonderful for a President whose legacy was a humanitarian statement. In addition, his natal Neptune conjunct the Midheaven trines Venus at 7 Aries 28, so Uranus is currently calling forth this aspect. It’s a compelling reason to believe that Lincoln will do well. However, Argo won the Baftas and Leo Ben Affleck was not nominated for Best Director for his role in Argo. Ben’s Sun is at 22 Leo 35 and the Oscars Moon is at 27 Leo 05, so slightly wide although notable, but what’s most intriguing is that Affleck’s Midheaven (success point) is 18 Pisces 59 and on Oscars night Mercury is retrograde at 19 Pisces 39. I wonder whether this makes the voters “think again” (Mercury retrograde). It’s as if it’s a chance to reconsider the film as Affleck was denied a nomination for Best Director. Mercury retrograde is the perfect symbol to rethink and reconsider. I will be intrigued to see how the astrology plays out but because of the prominent Mercury retrograde connecting to Affleck’s chart,