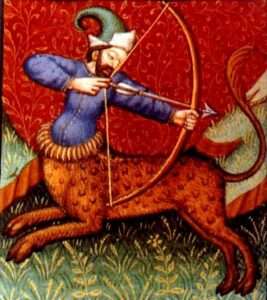 As a prelude to this change from darkness (Sun Scorpio) into the light (Sagittarius), here’s one of my favourite Sagittarius tales:

I watched the You Tube video below earlier in the week and was struck by how beautiful it was.

Looking into another person’s eyes is deeply connecting and the emotion that’s shared in this encounter speaks volumes.

It’s so personal and yet, as it’s seen through the eye of a lens and the public’s reaction, we share in the emotion and in so doing revive our own memories of love, loss and longing.

Often when I see something that touches me, I want to know more about the astrology to see what it can add to my experience and I was delighted by what I discovered when I read further about Marina Abramovic and Ulay.

Marina Abramovic is a performance artist born on November 30 1946 which makes her a Sun Sagittarius. In her work she explores the relationship between performer and artist, the limits of the body and the possibilities of the mind. One of her first performances involved playing a game with a knife where with fingers splayed she would jab the knife between them, pausing only when she cut herself to pick up a new knife and start all over again.

Having recorded the whole process, she then tried to replicate it cuts and all, merging past and present. Art taken to its extreme. Sagittarius is the sign of the traveller and explorer but it’s also the sign that loves to push boundaries and with a strong thirst for adventure, a typical Sagittarius is a sensation-seeker who thrives on the thrill of the new.

Marina and Ulay met in the 1970’s. They spent a decade working together in joint performance art collaborations and for some years they were involved in an intimate relationship. Ulay is also a Sagittarius with the same birthday as Marina, November 30th, but born 3 years earlier in 1943, and what struck me most was how their story ended.

In 1988 they wanted to embark on a journey that would symbolically define the end of their relationship and they chose to walk the Great Wall of China from different ends. Each of them walked 2500km, they met in the middle to hug and said goodbye. What a fabulously fitting way for two Sagittarians, the travellers of the zodiac, to call time on their relationship.

“The Artist is Present”

I don’t know whether they met in the years between until their meeting at MoMA, the Museum of Modern Art in 2010. The performance was entitled “The Artist Is Present” and Marina would sit silently and look into the eyes of the person seated infront of her. It’s stated that Marina didn’t know Ulay was going to be there and witnessing the emotional encounter between them, I believe it’s true.