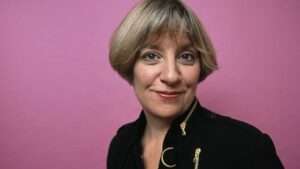 The news of Victoria Wood’s untimely death, age 62, on April 20th 2016 came as a shock. Only the people closest to her knew she had been diagnosed with cancer six months ago and her death was as private as many aspects of her personal life.

Victoria gave you the impression that behind closed doors and away from her fame, she wanted to lead a regular, everyday life and was insistent that her two children, now in their 20’s, should have as normal an upbringing as possible. Looking for details of her birth chart, I didn’t expect to find a time of birth and as far as I know, there’s none available.

I’ve been a huge fan of Victoria Wood for many years and followed her progress avidly. She was a Lancashire lass, a northerner, like myself and a lot of her comedy was derived from everyday observations, life’s mundanities.

She championed ‘the people who don’t have a voice and don’t have any way of getting themselves up the ladder’ (her words). Her popular sitcom Dinnerladies was set in a factory canteen and she created one of the most memorable comic characters, Mrs Overall, in the spoof soap Acorn Antiques played by her best friend, Julie Walters,

Victoria’s stand-up comedy can be knicker-wettingly funny and if you haven’t yet seen her aerobic teacher alter-egos, check them out on You Tube: Victoria Wood Fatitude & Victoria Wood Step Class.

Victoria was a Sun Taurus (b. May 19 1953), the sign renowned for its droll wit but she was also a Moon Leo and her performances on stage and in her one-woman shows were always colourful. Her style of comedy was joyful and vulnerable.

Like a true Taurus, she had a hard work ethic and it was her determination and persistence that propelled her to fame, although not overnight and she struggled hard to break in to the big time. Taurus isn’t a showy sign and Victoria could be self-deprecating, humble and unglamorous.

Yet this must also be partly attributed to her northern background. As Victoria herself admitted: ‘If they like you in the North of England they won’t say “You were wonderful, darling!”. They’ll say “you weren’t bad” or “I didn’t mind it”.’

It was on stage that Victoria shone and some of her songs she sang and played on the piano have to be heard all the way through to understand their brilliance. I could listen to “The Ballad of Barry & Freda (“Let’s Do It”)” over and over and still laugh out loud. Its most famous line has become a classic, ‘beat me on the bottom with a Woman’s Weekly’. 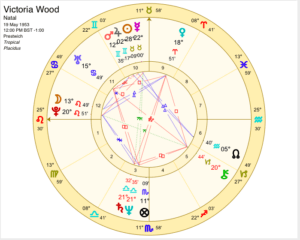 Victoria may be remembered for some of her classic phrases but it wasn’t just the one-liners that were memorable as she was a wordsmith.

In her natal chart (see right) Victoria’s Sun in Taurus is sandwiched between Mercury in Taurus, the communication planet, and jovial Jupiter in Gemini, the witty sign. Her words were her vocation.

In her later work, Victoria showed another side of her character, her skill as a playwright and her ability for pathos, exposing the more melancholic, bittersweet side of her personality.

Eric Morecambe was another Sun sign Taurus (b. May 14 1926), who was also from Lancashire and also died too young, aged only 58. Some of Victoria’s later work and writing has been compared to Alan Bennett (b. May 9 1934), who’s now 81. Another Sun Taurus, another northerner, although this time from Yorkshire.

No doubt Victoria Wood’s legacy will live on but wouldn’t it have been lovely if she had survived as long as the UK’s most famous Sun Taurus, the Queen (b. April 21 1926), who turned 90 the day after Victoria’s death.

I’m sure there were many more funny and touching words to come from Victoria Wood, which will never now see the light of day. As Julie Walters said of her death yesterday: ‘The loss of her is incalculable’.