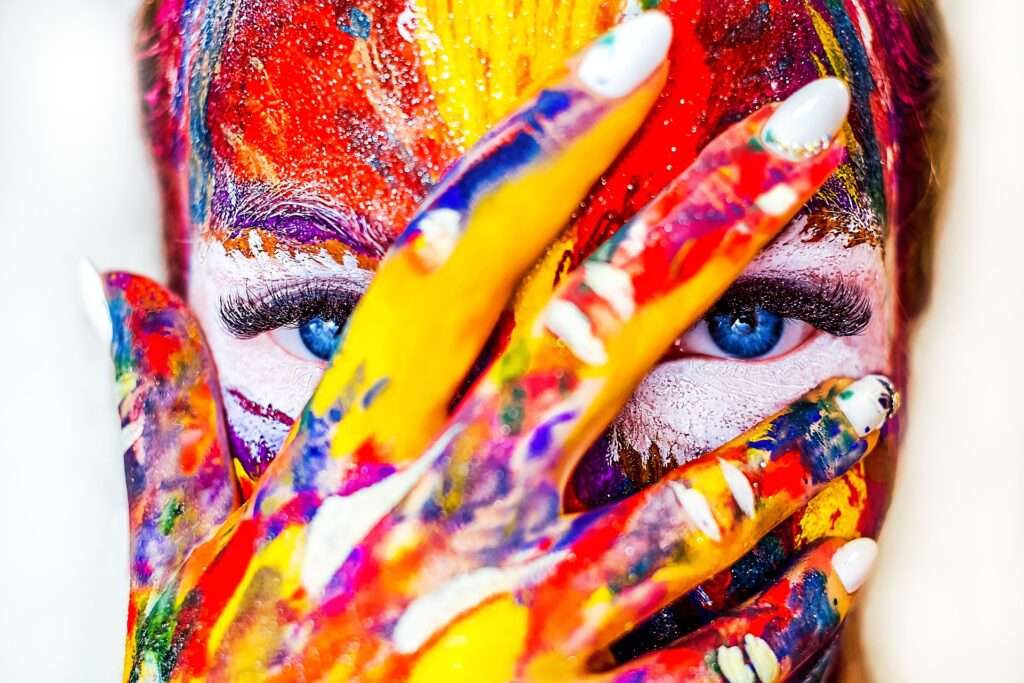 The title of this article is meant to draw your attention. Now I have it, sit back and read about what’s happening in the world with regard to women. Why, suddenly, everyone seems to have an opinion on how to be a woman, or not.

This article has been brewing in me for a few days. It started when I returned from a weekend break by the sea to find that the comments on my recent tennis/astrology forum, the US Open 2018, had gone crazy. It seems I missed the most controversial women’s final in Grand Slam tennis when Serena Williams, almost 37 years of age, took on Naomi Osaka, age 20, during the US Open.

If Serena had won, she would have equalled Margaret Court‘s record of 24 Grand Slam wins in women’s tennis. To be fair, Serena could have topped the all-time Grand Slam winners record already, if she hadn’t given birth to a baby girl in September 2017. Her last win was the Australian Open 2017, when she was already pregnant. She’s now back playing her top game.

Also, let’s just point out here that the top men’s player, Roger Federer, has 20 Grand Slam wins under his belt. Steffi Graf won 22 Grand Slams during her tennis career and Serena Williams is on 23.

If you saw the women’s final that took place last Saturday 8th September or heard about it, you would know why it’s been such a controversy. Serena Williams encountered a male umpire, Carlos Ramos, who was a stickler for the rules. He gave Serena three code violations, for getting coaching signals, for breaking her racquet, which cost her a point and for calling him a thief, which cost her a game. She’s since been fined £17,000.

Serena was furious at the way she was treated and subsequently lost the match to Naomi, who also played her top game. There was more controversy as the crowd booed Naomi’s win and sided with Serena. Serena comforted Naomi, but was obviously still livid with the umpire and she didn’t behave well.

As always when these events happen, I refer back to the astrology. The chart of the women’s final is below. What strikes you immediately is a powerful T-square between Venus (women) in its sign of rulership, Libra, not far from the Midheaven (the peak of the birth chart) almost exactly square Mars (men) in its sign of exaltation, Capricorn.

Mars in Capricorn plays by the rules, the authority figure, whereas Venus in Libra is meant to be charm personified, kind, caring and willing to negotiate. This square symbolises the battle of the sexes.

Note Uranus, however, the planet that’s all about controversy, down at the base of the horoscope. Uranus is unpredictable and volatile and Venus in Libra is heading straight for an opposition with Uranus. However, before getting there, Venus has to move into Scorpio, its sign of detriment. If Venus in Libra is the ‘good girl’ of astrology, then Venus in Scorpio is the ‘bad girl’, allegedly.

Venus In Scorpio – the ‘bad’ girl

Both Serena Williams and Naomi Osaka were born with the Sun in Libra, but Serena’s Venus is in Scorpio, the star sign of all things taboo, powerful and transformative. Here we have the strong woman (Venus Scorpio) who’s not behaving gracefully and accepting male authority.

In fact, this is a woman who went ballistic on the court, accused the umpire and, therefore, divided opinion. It’s already been pointed out that some male tennis players have done far worse and not received such strict code violations. Articles in the media have also spoken out about how Serena is treated as an ‘angry black woman’ and encounters both racist and sexist behaviour.

Whatever you think personally, what’s rearing its head is how women ‘should or should not behave’. How general consensus seems to feel that women are not meant to ‘lose it’ or allow their emotions to rage out of control or, perhaps controversially, even question male authority. It’s not ‘lady-like’ behaviour.

Isn’t this indicative of the Venus-Uranus opposition that’s taking place not once over the next few months but three times? After all, Uranus is the planet linked to rebellion. Here’s the line-up:

What’s interesting astrologically is that Serena’s Ascendant, the sign that was rising when she was born, is at 3 degrees Taurus (therefore, her ruling planet is Venus) and her natal Mercury (communication) is at 29 degrees Libra. 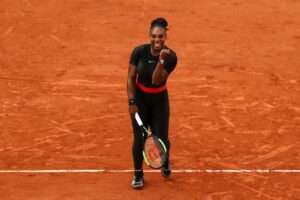 Uranus has been honing in on her Ascendant (body/self) and triggering Mercury (her voice) as it moves back and forth between Aries (the opposite sign to Libra) and Taurus from May 2018 to March 2019. Her Uranus transits are fully evident as people decry her behaviour as outrageous.

Earlier this year, she was banned from wearing her ‘Black Panther’ cat suit (see photo on right) that she wore at the French Open. Officials decided that it didn’t ‘respect the game’. Serena is becoming a figurehead of how (not) to be a woman.

During the recent US Open, Jupiter, the planet of good fortune, was exactly conjunct Serena’s natal Venus at 16 Scorpio as the tournament began. It should have been a moment of glory and, in an extraordinary way, it was. As Serena said in the post-match interview,

The #Metoo movement coincided with Jupiter’s move into Scorpio back in November 2017. Venus in Scorpio is making it personal, for Serena Williams and, no doubt, for all women who are willing to challenge how women are meant to behave.

Admittedly, Naomi Osaka got a rough ride during her first Grand Slam win. She seemed overcome at the ceremony and almost apologetic. Hopefully, she too can grow in power because of what she achieved.

Venus opposite Uranus, firstly in Scorpio and then in Libra, asks us to question what it means to be a woman in this day and age. Power takes many guises, just like Venus in her representation of women. That stands for all of us, whether we have Venus in her sign of rulership or Venus in her sign of detriment. Either way, we are all women.

[n.b. the author also has Venus in Scorpio in her birth chart]. 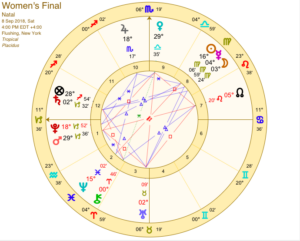 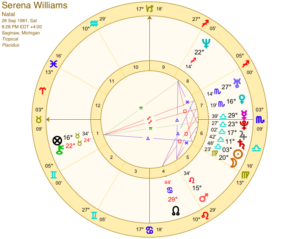