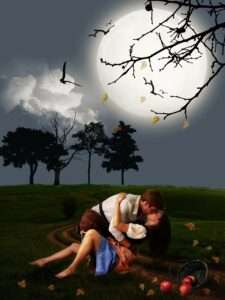 I have that Marvin Gaye song going round and round in my head, Let’s Get It On.

It seems highly appropriate as the lovers of the heavens, Venus and Mars, are now in the first sign of the zodiac Aries and heading for a red-hot conjunction tomorrow, Sunday 22nd February 2015.

The lovers meet at 2º Aries and if you have key planets/angles close to this degree of the zodiac, you’re going to feel it most.

If you are in love or you’re dying to get to know someone a lot better, this weekend is when the stars are buzzing. I mean really buzzing as even the Moon is in passionate Aries all weekend.

This is such different astrology to last weekend, Valentine’s Day weekend, when the stars were ok and Venus and Mars were in romantic Pisces but there wasn’t a whole lot of action.

This weekend’s astrology is all about action, being bold, going all out to get what you want, acting fast, being passionate and living life full on. If you want to sweep someone off their feet, leap on someone, spice up your love life, here’s your opportunity.

There are of course different ways this symbolism is going to play out and admittedly this is a heated combination. For example, in any relationship or 1-to-1 interaction, there’s strong potential that one person is going to act selfishly, do their thing, put their own needs first and this isn’t going to work.

Venus and Mars coming together represents partnership so for some there may be lessons around working together as a team, bumping into each other until you find a way forward that works for both of you.

If one person dominates, how are you going to deal with it? Mars is powerful in Aries in its sign of rulership, symbol of the hero, whereas Venus is weak in Aries in her sign of fall, yet she’s also on a mission.

Venus rules art and beauty, money and sensuality so there are other areas of your life that might be under the spotlight now. What do you feel passionate about? Where you do want action, intensity, to feel alive? This is not a sit-at-home-quietly-waiting-for-life-to-happen-to-you kind of energy. It’s about taking charge, being bold, making things happen.

In a lovely show of synchronicity I’m currently reading a book about human relationships [How To Be An Adult by David Richo] and dealing with our deepest emotions. The chapter I read this morning was about coping with fear and how to overcome fear in your life, so you’re in charge and you don’t let fear rule you.

The phrase that’s used is ‘acting as if…’, changing your behaviour through action. Acting as if you’re bold not scared; acting as if you know what you want; acting while you fear rather than waiting until you feel less afraid. ‘Acting as if’ is a form of playfulness where you practise assertiveness. It’s a lovely idea and oh so perfect for a weekend when Venus, Mars and the Moon are all in the courageous sign of Aries.

Let’s Get It On