Venus, goddess of love, and Mars, god of sexuality, connect in the heavens today symbolising the female and male cosmic union when two become one. It’s the perfect day to fall in love, declare your love, make a love proposal or to be in love.

It’s no surprise then that connections between Venus and Mars in the birth charts of lovers are another key factor in love compatibility. A famous couple who have a strong Venus/Mars connection are David and Victoria Beckham, or Posh and Becks. Their sun signs lie next to one another in the zodiac. David (born May 2 1975) is a Taurus, ruled by Venus, and Victoria (born April 17 1974) is an Aries, ruled by Mars. 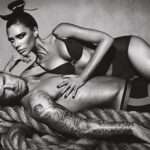 David and Victoria Beckham for Armani

The cosmic lovers share the same mutable signs in their charts, Gemini and Pisces. This creates a romantic, metrosexual vibe; David and Victoria have advertised Armani underwear together, David’s worn a sarong, Victoria’s been said to wear the trousers, and the two of them have an enduring love and a fourth child on the way, a girl to complement their three boys.

They married in 1999 and despite the criticisms and their personal ups and downs, Posh and Becks, like Venus and Mars before them, remain devoted sweethearts, the perfect embodiment of the cosmic lovers.