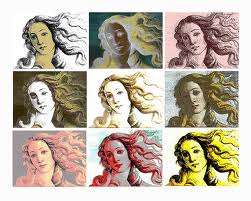 The Many Faces of Venus: flickr.com

Venus, Goddess of Love, rules Valentines Day. However she has become overly-entwined in our imaginations with Neptune, Venus’ higher octave, the planet of romance.

Together these two planets give us a “rose-coloured” idealistic perspective on love. Everyone thinks Venus represents love, fidelity and romance, perfect for Valentine’s Day. The true picture, however, gives us a different story.

Venus’ predecessors in the mythology line-up were Inanna and  Ishtar, around whom cults developed worshipping both goddesses. Part of the Sumerian pantheon of Gods and Goddesses in ancient Mesopotamia, they ruled sexual love, fertility, prosperity and warfare. Ishtar in particular was known for being “cruel and wayward”.

Move forward to Roman mythology and Venus was Goddess of prostitutes, although she could turn the hearts of men and women from sexual vice to virtue. In other words, Venus ruled all aspects of love (think of the term venereal disease which derivates from the word, Venus).

In Greek mythology, Venus was Aphrodite who ruled sexual love, desire, beauty and fertility. She was forced into an arranged marriage with “ugly” Haphaestus but was vehemently independent and constantly in search of a new lover. One of her more familiar lovers was Ares, God of War, whom she later married. But she had many affairs and many children, Eros, Rhodos, Hermaphroditus and Aneas, to name but a few.

So love comes in many guises and on this Valentines Day, 14th February 2012, it’s important to celebrate all aspects of love. If you’re in a conventional marriage or relationship, give your red roses, chocolates and champagne in honour of love. But if you’re not, honour what love means to you, whether your love of the Divine, love of friends and family, even love of a good book. Don’t be limited by what love has become. Love is immense and immeasurable and poses one of the biggest conundrums of our present day. Ask anyone “what is love?” and everyone will have a different answer and rightly so.