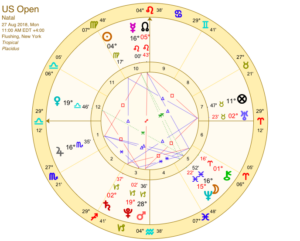 The major controversy, however, came in the women’s final between Serena Williams and Naomi Osaka – the battle of the Sun Libra women. This is the signature of Uranus conjunct the Descendant of the tournament chart – Uranus symbolising controversy. Plus, note Venus’, the planet which rules women, hiding away in the 12th house.

On the day of the women’s final, Venus was in her sign of rulership, Libra, and heading towards an opposition with Uranus. The following day, Venus would move into Scorpio, her sign of detriment and perfect the opposition to Uranus in Taurus three days later. I won’t say more about what happened as everyone has their opinion (see the comments below) but the astrology hints at all the themes raised – Venus in all her guises and how people react/respond to Venus (women).

As promised, here’s a snapshot of what to expect at this year’s US Open, 2018. As always, I’m hoping my lovely set of astrologer tennis fans will be alongside me to comment on the astrology. Heads down, let the tennis begin.

Astrological points to note: Mars turns direct only a couple of hours before the tournament begins. Mars is strong in Capricorn but currently moving slowly. However, as it picks up speed, this feels forceful and if players have key planets at 28/29 Capricorn, this could be useful to note.

As per last year, Uranus is conjunct the Descendant of the chart, highlighting the unexpected, perhaps an outsider who does well. Last year, this was Sloane Stephens’ moment, seeded 83, who won her first Grand Slam.

This year, Venus is the ruling planet as the Ascendant is late degrees Libra – Venus rules women. Hidden away in the 12th house, Venus is strong in Libra but keeping herself to herself after a challenging square to Pluto. Tricky to interpret for the tournament – any thoughts, please comment below.

Therefore, we must turn our attention to the Moon which is in Pisces in the lucky 5th house. The Moon is coming off a conjunction to mysterious Neptune but its next aspect is a trine aspect to Jupiter in Scorpio in the 1st house, therefore a nod to the favourite. We already know Jupiter is a key planet in prediction, as proven by this year’s Wimbledon, when Djokovic won with transiting Jupiter conjunct his Midheaven, the success point in the horoscope.

The other symbolism which suggests the ‘favourite’ to win is the lucky north node conjunct the Midheaven of the tournament chart.

To show how this can play out, Harry Kane (b. July 28 1993) had the transiting north node conjunct his natal Sun in Leo during the recent football World Cup and he won the Golden Boot, i.e. most goals scored. Gorgeous symbolism for a Sun Leo as Leo rules the colour gold.

On to the players. I’ve looked at the astrology for the top seeds and below is what stands out at first glance:

The favourite for the tournament and the defending champion. It’s all about Jupiter for Nadal, as the planet of good fortune moves closer to his natal Ascendant, the point which represents your self. The time of birth that fits best for Nadal is 7:10pm which means his Ascendant is 19 Scorpio 45. Jupiter starts the tournament at 16 Scorpio 35 but by the final is at 18 Scorpio 27. This is encouraging astrology for him, although nothing else in particular leaps out.

Federer’s not been playing brilliantly of late and has lost some final matches. Like Nadal, there is a tantalising Jupiter transit, because Federer’s natal Moon is at 20 Scorpio 44. Jupiter’s honing in on his Moon but won’t quite reach it during the tournament. I’m struggling to find lots to say about Federer’s astrology, except that he’s a Sun Leo and the north node remains in Leo during the tournament.

I can’t remember whether we have decided which time of birth works best for Zverev. He’s a hot young talent and I would dearly love him to do well. A Sun Taurus, he is one of many players who now has innovative Uranus in their star sign and this is particularly pertinent for Zverev as his Sun is either at 29 degrees Aries or 0 degrees Taurus depending on his time of birth. Either way, Uranus is triggering his natal Sun this year and next. I hope it brings him glory rather than flips him over.

Also, either time of birth is positive for Jupiter transits as 3am puts his Midheaven at 25 Scorpio and 11pm his Ascendant at 27 Scorpio. Jupiter’s a way off for now but will be honing in over the next few months. Finally, his natal Mars is 17 Virgo, the exact degree of the New Moon on September 9th, the day of the final.

Born at 3am and Mars is his career planet; born at 11pm and Mars is conjunct his Midheaven. Either way, it’s significant. Therefore, if he made it to the final, that’s some lovely astrology going on.

It’s important to point out that this has been a huge year for Djokovic. He was off the radar for a couple of years but won Wimbledon 2018 with transiting Jupiter conjunct his Midheaven (success point) and a stunning Sun/Mars progression which was exact on August 16th 2018.

Plus, he won the Cincinnati Masters on August 19th which meant he was the first man to win all nine Masters 1000 events since the series began in 1990. Awesome tennis and awesome astrology because Mars rules his Scorpio Midheaven.

Djokovic’ astrology remains strong with Jupiter in his 10th house, ruling career and status. The Saturn-Uranus trine that dominates September’s astrology also highlights his natal Mars at 1 Cancer 19 backing up the progression to Mars.

Goffin is a Sun Sagittarius and the north node was at 28 degrees Capricorn 56 when he was born. This is exactly where Mars is turning direct so it will be interesting to see whether this proves positive for him. He also has his natal Pluto at 18 Scorpio 46 and by the final, Jupiter will have reached 18 Scorpio 27. Not convincing astrology, but worth noting.

A Sun Cancer, Carreno Busta has Pluto at 17 Scorpio 38 and Jupiter at 16 Leo 40 in his natal horoscope. Therefore, the Mercury/Jupiter transiting square is connecting to parts of his horoscope although, without a time of birth, we don’t know what it means exactly.

No time of birth for Sun Scorpio Coric, but his Sun is at 20 degrees Scorpio so lucky Jupiter will soon make its once-every-twelve-years transit over his Sun. Plus, his natal Venus is at 19 Libra 25, very close to where Venus begins the tournament and the chart ruler. What it might mean, I’m not entirely sure!

A Sun Capricorn, Raonic’ north node is at 29 degrees Capricorn. Therefore, Mars has turned stationary direct conjunct his lucky north node. We’ll see if this plays out well for him, although a lot depends where the north node is positioned in his horoscope and, without a verified time of birth, we don’t know.

Andy Murray is playing at the US Open but he’s already counted himself out. He’s says it’s ‘highly unrealistic’ for him to win considering his injury problems of recent times. The astrology doesn’t suggest a lot different. On the day of the final, there’s a New Moon at 17 degrees Virgo, close to his natal Ascendant at 14 degrees Virgo, but it’s a big ask.

The tournament chart suggests one of the favourites and out of the top 3, I would favour Djokovic’ astrology.

Firstly, note they are born one day apart, albeit different years. Both Sun Libra and the ruler of the chart tournament is Venus in Libra.

Secondly, Serena’s natal Venus is 16 Scorpio 20 so transiting Jupiter is conjunct her Venus as the tournament begins, Venus being her chart ruler. Simona’s natal Pluto is 18 Scorpio 33 and transiting Jupiter is conjunct her Pluto on the day of the final. Both strong transits, although we don’t know what Pluto rules in Simona’s horoscope, as there’s no time of birth for her. Still, lovely Jupiter transits for both players. Therefore, you would expect them both to do well. [Update: Halep crashed out in the first round, a reminder that Pluto either raises you to power or wipes you out!]