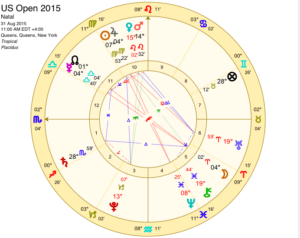 Update: September 14th 2015. I have been thinking all day about the astrology for the US Open as I didn’t get this prediction correct. I now believe that I interpreted the chart for the tournament incorrectly.

I thought this meant that the favourite wouldn’t win and as both planets go on to trine Uranus, I predicted a surprise winner.

Uranus rules Aquarius – was Vinci the surprise shown by the chart? I believe so. Plus, there were more players retiring this year in the men’s tournament and top seeds did go out early on making Djokovic’ path to the final easier than it could have been.

So the surprises came mainly in the womens’ game and also in the mixed doubles as the Kazakhstan player Yaroslava Shvedova had arranged to get married on the final Saturday but needed to change plans suddenly when her doubles partnership made it through to the final and were runners-up!

The US Open begins tomorrow, August 31st 2015, and once again this article is a look at the astrology for the tournament (see chart on left) plus the astrological predictions for the top players.

It’s also a forum for people to comment on the tennis as it plays out and the tennis blogs have become one of the most popular items on the website so thank you to all who contribute.

I know that for some readers the astrology is complex but I do want to write this to please everyone and a lot of people have a good understanding of the astrological symbolism. If the astrology bamboozles you, my advice is to jump to the bits that interest you/you understand and ignore the rest.

The chart for the start of the tournament (see above) gives you a symbolic picture of what to expect in the coming fortnight’s tennis. Here’s what’s important. An early Scorpio Ascendant means that the ruling planet is Mars at 14 Leo in the 10th house close to but not conjunct the Leo Midheaven. This immediately picks out the favourite doing well as the ruler of the Ascendant. Mars is the competitive planet and the Midheaven is the success point of the chart.

However, there is a second planet conjunct Mars and this is Venus, ruler of the 7th house. Venus starts the tournament retrograde, i.e. weakened but she turns direct on September 6th and by the time of the final will be strong once again. So the favourite will be challenged as the ruler of the 7th is emphasised. Both these planets Mars and Venus are heading towards a positive trine aspect to Uranus (classically the outsider). So nothing is clear cut here and it’s anyone’s game.

Plus, note the lovely Sun/Jupiter conjunction in Virgo also in the 10th house and in the public eye. Will Virgos do well this year or players with their Jupiter return in Virgo, i.e. age 24? It’s their turn to play big and do well and I have noted a few key names below.

The Moon is always worth noting in charts which symbolise a specific moment in time as the Moon is the quickest-moving planetary body. The Moon is in competitive Aries and makes a few planetary aspects before it completes harmonious trine aspects to the Mars/Venus duo and ends up conjunct Uranus. I suspect that like last year when the final was an unlikely match between Cilic and Nishikori, we might see some new faces emerge and shocks and surprises (Uranus) are part of the picture.

I don’t often comment on the women’s tennis but you cannot ignore the fact that Serena Williams is competing for more than the US Open title. She’s on target to win a Calendar Grand Slam (victor of all four Grand Slams in one calendar year) and to equal Steffi Graf’s record of 22 Grand Slam victories. It’s perhaps no surprise that the women’s final sold out before the men’s final this year.

I so hope she achieves this goal because she’s an awesome player. Here’s the link to an article I wrote about Serena recently. The Venus/Mars combination on the Midheaven looks positive for Serena. A Sun Libra with a Taurus Ascendant, her Venusian attributes are a wonderful mix of Venus grace and Mars power.

Plus in her natal chart, her own confident and competitive Mars is at 15 Leo 35 so Venus turns direct on her Mars. On the day of the final, her progressed Moon is exactly sextile Saturn ruling her Capricorn Midheaven and therefore her career planet. The stars are backing her, so here’s hoping she follows through.

The current no. 1 seed hasn’t had the best run-up to the US Open. He was beaten in the final at Montreal by Andy Murray and in the final at Cincinnati by Roger Federer so is he on a losing streak? You can never count out the no. 1 favourite and he’s always the man to beat. Yet astrologically there’s not a lot to get excited about.

He has no planets/angles in Leo or Virgo, the signs of the moment and although his Moon is 5 Aries, close to the Moon in the tournament chart, that’s not enough to base a prediction on. Jupiter, the success planet, will make a positive aspect to his own Venus at 6 Taurus on September 10th but it’s not stunning symbolism for his career. Venus links to his personal/home life.

Roger Federer continues to play amazing tennis and winning in Cincinnati last week beating his nemesis Djokovic (who beat him at Wimbledon) must have increased his confidence. The US Open isn’t his favourite surface but he has some lovely astrology boosting his chances.

Federer’s Sun is at 15 Leo next to Mercury, ruler of his Gemini Midheaven and therefore his career planet, and Mercury is at 13 Leo. Look at the Venus/Mars conjunction in the tournament chart. They fit snugly between his Sun/Mercury conjunction and competitive Mars would have been applying by conjunction to his natal Mercury when he won Cincinnati. He’s on a roll.

Plus Federer’s progressions look lovely too as his progressed Ascendant is applying to a conjunction with lucky Jupiter, exact on September 22nd. It might not shout out career success but he’s in flow, in tune with the stars and anything can happen.

Andy Murray’s having an awesome year. He’s playing great tennis, he got married and he has a baby on the way. He does however have one of the hardest first-round matches in the US Open against notorious bad boy Nick Kyrgios. Nick Kyrgios, b. April 27 1995 is a Sun Taurus but his Mars is at 19 Leo and he will have his Mars return (a bi-annual event) during the tournament). Expect antics and some powerful tennis!

Like Federer, Murray has a Virgo Ascendant, 14 Virgo for Murray so Jupiter’s further away than it is for Federer. Uranus (surprises) makes a positive trine aspect to his natal Saturn at 19 Sagittarius, exact on the day of the final. Saturn’s not linked to his career though but is linked to children/family.

Murray’s coach Amelie Mauresmo b. July 5 1979 does have stunning astrology with a Mercury/Jupiter conjunction at 8 and 11 Leo respectively. Jupiter rules her 5th house of children and she’s just had a baby boy so she’s unlikely to be at Murray’s side during the tournament.

Rafael Nadal has himself admitted that this is his worst year of tennis in 11 years although he is starting to win some solid matches once again. I can’t see him grabbing a win at the US Open as he doesn’t seem back to his best yet and the astrology confirms this.

However he does have Saturn in his 1st house ruling his physical body and he’s such an intense player that this must put great stress on him physically. His Saturn return is exact later this year in November which can be a testing time. So even with Jupiter (success) in his career house, Nadal doesn’t seem to be able to raise his game, as yet.

The Best Of The Rest:

I mentioned we might see some Sun Virgos come to the fore now Jupiter is blessing their sign for the next 12 months. Here’s a few of them:

Berdych is seeded no. 6. His Sun is at 24 Virgo, Mercury, often prominent in tennis players, is at 19 Virgo and his Mars (competitiveness) is at 4 Virgo. Jupiter is conjunct his Mars as the tournament begins.

Monfils’ Sun is at 8 Virgo conjunct Mercury at 3 Virgo so Jupiter is lighting up this powerful duo. They’re in his 2nd house ruling money so he should do well.

Gulbis’ Sun is at 7 Virgo and his Mercury is at 29 Virgo so Jupiter is exactly conjunct his Sun during the final.

Jack Sock is a Sun Libra but his Jupiter is at 26 Virgo so he’s heading for his 2nd Jupiter return, often a time of success.

Not a Sun Virgo but a Sun Scorpio. However, his Mars (competition/athleticism) is at 8 Virgo and Jupiter’s heading ever closer towards it during the tournament.

I think the astrology is pointing to a new name on the trophy, but I would love for Roger Federer to snatch one more title. It’s a real long shot but the astrology continues to put this majestic Leo centre stage.