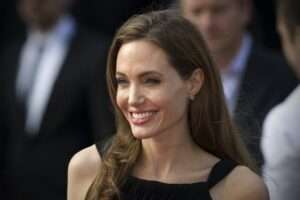 I was in the car yesterday when I heard on the radio that Angelina Jolie had a cancer scare and elected to have an operation last week to remove her ovaries and fallopian tubes. This will cause the onset of early menopause and she will not be able to fall pregnant again.

Yes, she already has six children, three of whom she gave birth to but she is still only 39 years of age. Ouch!

I have written about Angelina numerous times now on this website and what’s happening in her birth chart is extremely symbolic for what’s currently happening in her life. As above, so below and as we know, astrology is the art of timing.

Angelina’s chart (see below) shows that she is a Sun Gemini, the sign of the orator and she is primarily an actor, darling. Yet it’s Venus conjunct her Cancer Ascendant that is her hallmark. Venus is the planet of beauty and the Ascendant rules your physical self, how other people see you and Angelina has often been named one of the most beautiful women in the world. Plus Cancer is the sign of the family and these days she’s in the news more for her ‘brood’ and her loving family than she is her acting roles.

With a Cancer Ascendant, this denotes the Moon as her ruling planet and Angelina’s image is reminiscent of a Moon Goddess. When I wrote about her double mastectomy two years ago, I pointed out that with her Moon in Aries, the sign of the warrior, and conjunct Mars, the God of War, there’s a side to Angelina that is akin to the great Amazonian warriors. Amazon means literally ‘without breast’ and these amazing women warriors would remove a breast in order to better shoot their bows and arrows.

Moon-Mars in Aries: what a stunning astrological symbol for a woman whose own mother (symbol of the Moon) died young scarred by cancer and who subsequently chose to have her own breasts removed as a protection against cancer. In the human body, the Moon rules breasts and the womb, the ‘baby-rearing’ parts of the body.

The Moon-Mars conjunction doesn’t stand alone in her chart as the Moon is conjunct Jupiter in Aries close to the Midheaven. Jupiter expands what it touches and it’s the planet of truth and justice. These days, Angelina channels her warrior spirit into charitable and world concerns. The Midheaven rules her career/vocation and this point of the chart is also linked to the mother.

A more challenging aspect is an opposition from Pluto in Libra to the Moon/Mars and it’s Angelina’s Pluto that was being triggered on February 16 2013, the day of her double mastectomy. The Uranus-Pluto square, symbol of transformation, was well underway by then as the first clash came in June 2012. Fast forward 8 months and Uranus was at 6 Aries 18, almost exactly conjunct her natal Pluto. In addition, transiting Pluto was at 10 Capricorn 49, almost exactly square her natal Mars.

Two years ago, Angelina wasn’t quite experiencing her Mars return as Mars was in Pisces, the sign before her natal Mars, but almost. You experience your Mars return every two years when Mars returns to the place it was when you were born. Right now, Mars is once again in Aries and this is fitting symbolism for the surgeon’s knife as Mars rules all implements that cut and slice. Plus last week saw the final Uranus-Pluto square on March 17 2015 and the process of transformation continues for Angelina and you hope is now complete.

What she’s been through in the last two years smacks of the Uranus-Pluto symbolism; out with the old and in with the new, and for Angelina personally it must also have been a time of deep grieving. Her own ‘reconstruction’ will no doubt have aroused painful memories of the loss of her own mother as well as the fear of her own mortality.

What’s perhaps most revealing this time around is that the Uranus-Pluto astrology links in most closely to Brad Pitt’s chart, Angelina’s husband. He’s a Sun Sagittarius, sign of the entrepreneur/explorer, but he has four planets in Capricorn (see below), a savvy businessman, and his natal Mercury, ruler of his 7th house of relationships and therefore his partner planet, falls at 16 Capricorn 07. Last week’s Uranus-Pluto square fell at 15 Aries/Capricorn 19 and within orb of Brad’s natal Mercury.

Notice too that Brad’s ruling planet Jupiter is at 9 Aries 50 conjunct Angelina’s natal Mars at 10 Aries 42 and Brad’s natal Mars at 10 Capricorn 02 is almost exactly square Angelina’s natal Mars. Mars squares suggest that their relationship must be passionate, intense and at times feisty. Yet Jupiter is the protective planet and Brad must feel incredibly protective of Angelina and her brave ‘warrior-like’ choices. Choices which are undoubtedly not easy and which must stab at his own heart and as a consequence wound him deeply too.

I love the following quote by Angelina which followed her double mastectomy: “On a personal note, I do not feel any less of a woman. I feel empowered that I made a strong choice that in no way diminishes my femininity.” Her Venus in Cancer talking which gives you a sense that whatever transformation Angelina has been through over the past two years, she still feels beautiful inside and out. Mars in Aries plus Venus in Cancer: strength & beauty. 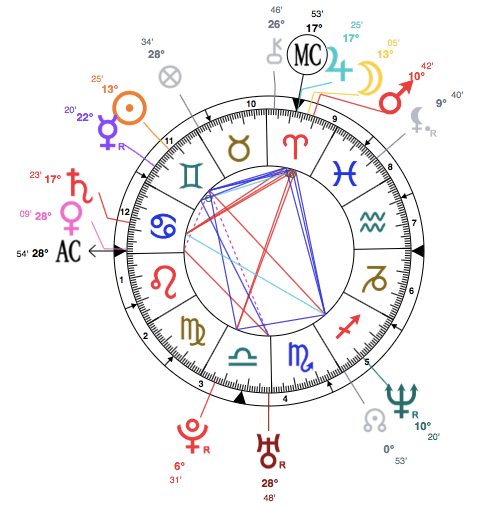 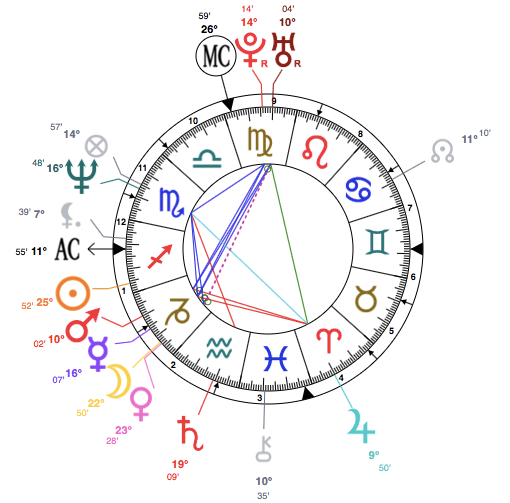