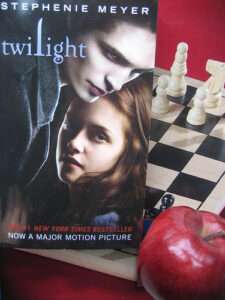 On 20th May 2011 I posted a blog entitled Twilight Lovers talking about the amazing astrological connection between Robert Pattinson (born May 13th 1986) and Kristen Stewart (born April 9th 1990) of Twilight fame.

The astrology is quite spooky as they were both born when Cancer was on the horizon which means they are both ruled by the Moon. The Moon rules the lunar world, the night-time, perfect for a couple who met filming a vampire movie.

It’s as if they were born to be together for the film phenomena that is Twilight and it’s lunar sequels, New Moon, Eclipse and Breaking Dawn and then they fell in love. The fairy tale becomes reality.

Earlier this year, however, Kristen became a hated figure when she met Rupert Sanders, a Capricorn (born 15th Jan 1971) filming Snow White and the Huntsman. The older man shows in her chart as she has a Capricorn Descendant so her partner planet is Saturn at 24 Capricorn 49.

Robert Pattinson was already the older man by 4 years but Rupert Sanders held the trump card not only because he was older but because his Sun is at 24 Capricorn 39, embodying her partner planet Saturn. Another freakishly close connection and an irresistible pull for young Kristen.

So what now? Will Robert and Kristen rediscover their love for each other and live happily ever after, just like Edward and Bella do, despite all the seemingly impossible obstacles? If I’m honest, they will have to wait a good few years yet. In fact, as they both have Saturn as their partner planet, it won’t be until their Saturn return that they are finally ready to settle down once and for all. For Robert this occurs in 2015 and for Kristen only in 2020.

The end of this year 2012 and spring 2013 there’s definitely hope, although Robert’s the one who’s changing fast. The eclipse cycle in November 2012 and April/May 2013 connects with his personal planets signalling dramatic change but the astrology does suggest Robert and Kristen may get back together again in spring and summer of 2013.

Before celebrating a possible romantic reunion, it’s important to note that Pluto, the wipeout planet, will go over their mutual Ascendant/Descendant axis in 2015 so it will be a big ask for them to rise from the ashes like the legendary phoenix. Whether they’re together or not, with the exact same Ascendant, they know each other inside out and will forever be entwined, like Edward and Bella in their fictional roles.