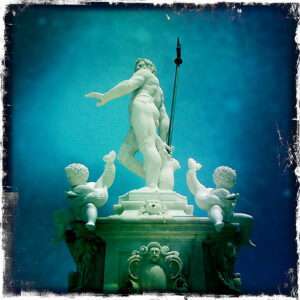 Neptune, God of the Sea, with cherubs

Neptune is the planet of illusion and was discovered in 1846, a period in which there were major developments in photography and film.

It’s no surprise that Neptune dominates in the charts of film stars, actors, actresses and anyone who’s seduced or charmed by the idealistic worlds of glamour and fame.

Neptune is the antithesis of reality as its realm is fantasy. Just as the sea is boundless, Neptune collapses boundaries and transcends everyday routine and mundanity. Neptune is considered the ‘higher octave’ of Venus, Goddess of love, and falling in love becomes a form of ecstasy whilst relationships are viewed through a romantic haze.

Katie Holmes famously predicted her marriage to Tom Cruise when, as an 8 year old girl, she saw him in the film Top Gun and 20 years later her wish came true when she married her childhood fantasy. When Katie was 8 years old, in her natal chart she was experiencing a Neptune transit of her Mars. A male movie star (Mars/Neptune) became her ideal (Neptune) man (Mars).

Neptune transits sweep you off your feet, it’s easy to lose sight of reality and believe the illusion. When Katie got together with Tom, events moved at warp speed. Here’s a brief precis of what occurred:

Between April 11th 2005 and November 23rd 2006, Neptune opposed Katie’s Moon in Leo five times and the dates fit almost exactly her whirlwind courtship, pregnancy and marriage to Tom. It’s such simple astrology as the Moon rules emotions, it’s a feminine influence and in Katie’s chart the Moon is very close to her Leo Ascendant, the point of the chart that signifies self. She fell head over heels in love and was swept away by the power of her emotions.

Leo is the sign that needs to be adored, craves attention and wants to be in the spotlight. Emotionally expressive, the Moon in Leo is a showy Moon and represents the drama queen or king. Predictably, Tom has strong Leo in his chart too and shares a Leo Moon with Katie, plus he has Venus, the Midheaven, Uranus and the north node all in the sign of the performer.

This is where we find the most significant synastry* between Tom and Katie’s charts, for Katie’s Moon at 17 degrees 12 and Tom’s Venus at 19 degrees 26 sit close together in the sign of Leo. So Neptune also opposed Tom’s Venus between April 14th 2006 and November 26th 2007 and again made five connections. This is the classic ‘falling in love’ signature that transported them to heaven and back.

The problem with Neptune is what happens when the honeymoon period is over and the fantasy switches back to reality. People who have Neptune dominant in their charts often find it difficult to adapt to everday life which is perhaps why so many celebrity marriages end so quickly. They find it hard to deal with any disappointment and seem unprepared to work at love, expecting the daydream to last for ever. And if there’s a chance to experience the ecstasy and bliss of ‘true’ love all over again with someone new, then why not. Neptune’s charm is incredibly seductive.

Katie’s Moon in Leo is trine Neptune in her natal chart and Tom’s Neptune is in his 1st house, part of a grand trine in water and involved in a T-square to the Moon opposite Saturn. In other words, Neptune plays a pivotal role in both their charts. The astrology shows that their love for one another was real or at least as real as Neptune allows.

I remember looking at Katie’s chart when the two of them married and she not only had Saturn transits over her Moon and Ascendant in 2006/2007 but she also had a Pluto transit of her Sun at the same time. A double whammy of heavy influences, the exact opposite of a floaty, weightless Neptune ‘falling in love’ experience.

I don’t know when their relationship started to go wrong but, if it was up to Neptune alone, there’d be no working through the tough stuff and all that would remain would be a desire to escape, a very real slip sliding away.

* synastry is astrological compatibility, the branch of astrology that studies relationships by comparing natal horoscopes.