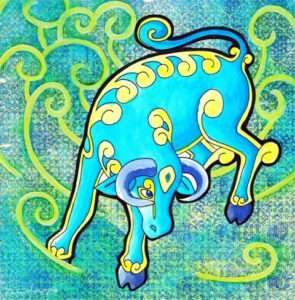 Last Friday, 20th April, I was shopping in one of the cheaper supermarkets when I overheard one of my fellow shoppers talking to anyone who would listen about the price of different foods.

He was a walking talking encyclopedia about what individual food items cost in not one or two but three different supermarkets.

His favourite wasn’t the shop we were in and I couldn’t help laughing thinking that he was a brilliant advert for the other supermarket, marketing their “best buys” in compelling fashion.

I even noticed a shop assistant listening avidly and by the end of the man’s speech, we not only knew the cheapest place to buy food items in the local neighbourhood but also what our informative shopper “and me’ wife” would be eating throughout the week. A colourful character who cheered up my supermarket challenge.

As I drove off in my car, I switched on the radio and the first word the presenter said was, “Money”, followed by, “now there’s a sensitive subject”. My next port of call was coffee with a girlfriend, who dashed in late saying “B….. money, do you know how much I’ve just been charged for petrol and the car park’s gone up!”  I was starting to get the message loud and clear that everyone was talking about money and not always in glowing terms.

This was of interest to me as it coincided with the first day of the Sun in Taurus, the sign associated with money, personal finances and possessions. With the Sun in Taurus for the next four weeks, is it time to take a new look at money and become money savvy rather than complain endlessly about the cost of living?

A good start would be to examine your beliefs about money, what it means to you or what it represents. Money means different things to different people which was confirmed to me many years ago when I took part in a course entitled Making Money Count run by a personal development organisation called Life Training, now More To Life. On their website, it states that the course helps you “master your relationship with money and practice money mastery”. It was a valuable opportunity to spend time thinking about money and how your mindset about money is created, as well as exploring how to create new wealth.

My story was that my Dad was an accountant and when I left home aged 18, I was on my own financially. It was a tough lesson to learn, but worthwhile? Cor blimey, yes, I learnt to be responsible with my own money super fast and when I wasn’t, I went without. I remember hearing about how Mum & Dad used to have meat once a week because that’s all they could afford and how my Dad once slept in a bath for six weeks when he started a new job. He couldn’t afford the rent for a bedroom but the landlady offered him a spare bathroom at half price. Some of you may have similar stories or memories or perhaps you come from a wealthy background and enjoyed lavish spending and luxury, which would create a different mindset.

A relatively new idea (to me) is the Law of Attraction and the power of positive thought. I was introduced to the 40 day Abundance programme when I was part of the Better Bloggers group in February which is one way to open your mind to the possibility that abundance is all around us. I particularly enjoyed this post by Jan Marchant, entitled An Abundance of Abundance, which gives you an idea of how life can be when you choose to live abundantly. Details of the 40 day Abundance programme are on her blog post.

Another idea is to change your perspective about money. Traditionally, money had no individual value as such but was a form of bartering and the whole idea of trade comes from this concept. On Friday, I came across this article on how a village in Greece have created their own local currency to deal with their economic crisis and to help create a more shareable way of living. Do you have skills to offer in exchange for goods or services that you need or want?

So whilst the Sun is in Taurus, I encourage you to look at money differently and see whether any of the ideas above can help you in some way, however small, to have a better relationship with money.

Finally, I’d like to share a quote that inspired me. Sometimes it takes a unique mind, like the Dalai Lama, to help you rethink the way you live your life. After all, it’s only money… 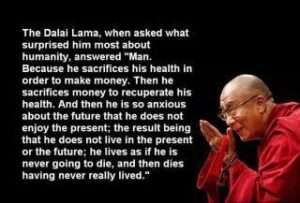