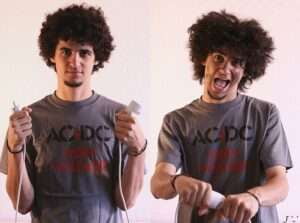 Life can be so unpredictable.

Well, I certainly hope so.

Uranus turned retrograde the night before last (exact July 22nd 2014 3:45am BST) and I couldn’t sleep a jot. Uranus is restless energy and I felt strung out for most of the day.  It seems I’m not the only person to be wide awake whilst Uranus turned if the social media grapevine is anything to go by.

This retrograde station comes a couple of days after Saturn also did an about-turn in the heavens ( exact July 20th 2014 9:35 pm BST) but from retrograde to direct motion. What’s interesting about this is that both planets are at 16 degrees; Saturn turned direct at 16 Scorpio 39 and Uranus turned retrograde at 16 Aries 31.

Saturn and Uranus are opposite energies: Saturn rules tradition, conformity, rules & regulations whereas Uranus rules unpredictability, eccentric behaviour and likes to break the rules. Saturn says ‘no’, Uranus says ‘what the heck, let’s give it a go’; Saturn rules the past, Uranus rules the future; Saturn is sensible, Uranus is crazy: you get the picture…

The aspect these two are making is called a quincunx or inconjunct, which means they are 5 or 7 signs apart depending which way you count round the circle of the zodiac (Saturn would no doubt count clockwise; Uranus would go the other way and count anti-clockwise). This is known as the ‘blind spot’ in astrology; the two planets can’t see each other easily across the face of the astrological clock, they’re out of sorts, unsure what the other is up to.

This got me wondering whether one of the two planets would dominate over the other, perhaps if you have Saturn or Uranus particularly strong in your chart, or whether there’s way to integrate the two planets together. Is there a situation in your life where you want or need to conform (Saturn) yet you feel like an outsider (Uranus)? Do you have a huge urge to rebel or follow your own agenda (Uranus) but life keeps stopping you in your tracks or you’re asked by others to do things properly or rigidly (Saturn)?

Yesterday morning I saw a headline which stated, ‘Married Anna Paquin says monogamy and bisexuality are not mutually exclusive’. What a brilliant statement for the Saturn-Uranus quincunx. Monogamy is Saturn, doing things traditionally, the ‘right’ way and Uranus is bisexuality, daring to be different. Anna Paquin went on to say that she wants society to think of those in the LGBT as ‘normal’ and ‘boring’ as the next person. Are you Uranus or Saturn or can you be both?

Anna Paquin (b. July 24th 1982) is an actress who won an Academy Award age 11 for her role in one of my favourite films, The Piano (1993). If you haven’t seen it before, it’s worth watching. Holly Hunter plays Ada McGrath, mother of Flora (Anna’s character) who’s caught between two men, one a very Saturnian character, played by Sam Neill and the other, a Uranian character, played by Harvey Keitel. I won’t say more about the plot so as not to spoil it for you. Anna is now better known for her roles in True Blood and X-Men.

A quick look at Anna’s chart shows that she has a Sun/Mercury conjunction in early degrees of Leo; Mercury at 0 Leo 43 and the Sun at 1 Leo 28. Both of these are in a very close trine to Uranus at 0 Sagittarius 41 so Anna knows how to celebrate (Leo) being different (Uranus). Plus Saturn in her chart is at 16 Libra 34, the relationship sign, and Uranus at 16 Aries 31 is turning retrograde exactly opposite her natal Saturn. At this very moment in time, Anna is suggesting that we can do things differently in relationships, why limit yourself if that’s not being true to who you are?

This is a lovely showing of Saturn and Uranus both making their presence known. They could remain a blind spot in our lives or if we choose we can embrace both energies. My own natal Saturn is in Uranus’ sign of Aquarius and I work (Saturn) as an astrologer (Uranus). I know about balancing the traditional world of work and earning money with the life of a self-employed astrologer. It’s not always easy, it’s a challenge but boy, is it satisfying. Where in your own life are you honouring (Saturn) diversity (Uranus)?

– I read the Becky Sharp quote recently in a wonderful book by Tosha Silver, entitled ‘Outrageous Openness’; Tosha herself is a Sun Capricorn (Saturn’s sign) and her book is most definitely Uranian, as you can tell by the title. Uranus loves to dare to be outrageous and walk his own path.