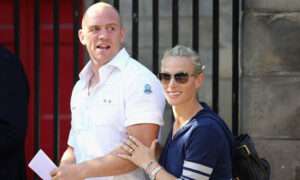 Astrologically, theirs is a marriage made in heaven. Initially this blog was going to look primarily at Venus, goddess of love, and the planet that represents love, art and beauty. Zara is a Taurus and Mike a Libran and these are the two signs of the zodiac that have Venus as their ruling planet. They share a love of the good things in life as Venus rules pleasure and hedonism.

However, a closer look at their charts reveals the meeting of two soulmates. Mike’s Sun Libra is in the same place in the heavens as Zara’s Moon Libra, the classic cosmic marriage. In their charts, this not only works from the first chart to the second but the other way round as well, i.e. Mike has Moon Taurus which is very close to Zara’s Sun Taurus. Plus Mike has Venus and Mars, the planets of love and sexuality, in Scorpio, slap bang on Zara’s Scorpio Ascendant, the sign that was rising on the horizon when she was born. So it’s a slam dunk of three-way stunning love compatibility.

Zara is often portrayed as one of the most down-to-earth royals and Mike is a northern rugby player. This week the Daily Mail reported that Mike’s Mum said he’s so in love that he wouldn’t mind if his royal fiancee ‘worked at a Tesco checkout’. It may have seemed an unlikely match at first but the stars suggest that this marriage is a fairytale and this royal couple are destined to live happily ever after.