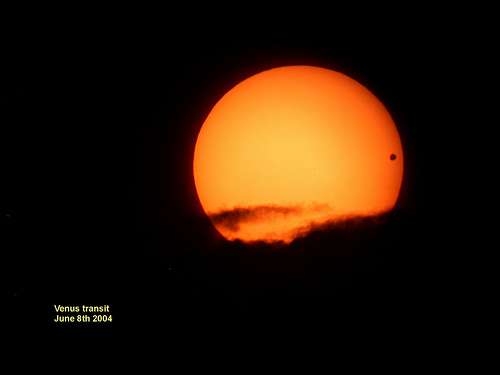 Venus and the Sun meet one another in the heavens on a regular basis but usually Venus is above or below the Sun and not crossing directly across the face of it. In the photo above, you can see the shadow of Venus on the Sun’s surface (the tiny black dot on the right). This is what makes this Venus transit so spectacular.

The current transit will be visible in the Americas on the evening of 5th June 2012 and in Europe early morning of 6th June 2012.  However, it’s very important that you don’t look at the Sun directly but only look at it through special viewing glasses.

So what does it mean for you personally and the world at large? It may help to think back to the first date of the pair and see if anything significant springs to mind. I have to say I can’t think of anything remarkable that happened on or around that date in my own life. However I don’t have any planets in Gemini, so it’s likely to mirror events in your own life if you have planets at the key degrees of Gemini. The 2004 transit fell at 17:53 Gemini and this 2012 transit falls at 15:45 Gemini (key birthdays 5th-8th June).

Venus rules love, pleasure and money, all the good things in life, so it feels hopeful. If you want to know more about what area of your life Gemini rules then read your monthly forecast for June 2012 which you will find in individual posts on this website. Astrologer Jonathan Cainer is calling this Venus transit a “reboot” of the heart and many astrologers feel it’s a positive sign.

In the UK, it coincides with the Diamond Jubilee weekend, celebrating 60 years of the Queen’s reign. On the evening of 4th June 2012, there will be hundreds of beacons lit in the UK and around the world to celebrate this event. This seems a fitting symbolism for the Sun/Venus conjunction, even if it falls a day early. Little lights all around the globe linking us together as one. The Sun and Venus together suggest one big party and Venus rules relationships.

However, as I said in a previous blog article, entitled The Many Faces Of Venus, we have forgotten a lot about the mythology of Venus, who was originally a goddess of war as well as of love. Add to the mix, the fact that Venus is currently retrograde, which means she’s giving the illusion of moving backwards and the picture is even more complex. This also means that Venus has been shining bright as an evening star over the last few months but she’s about to become a morning star, which the Mayans in particular considered bad luck.

But just as the Mayans predicted the world will end in 2012 (and it won’t), it’s not helpful to focus on doom and gloom, plus it’s important to stick to the astrological symbolism that we know works in the modern world. A Sun/Venus conjunction promises romance, success and emphasizes the role of the feminine.

This is the perfect opportunity to be realistic and honest about who or what you love and what you value in your own life and, with Venus retrograde, to keep love private or marry in secret if it feels right to do so. If you are experiencing difficulties in love, then be patient and see whether love returns when Venus turns direct on 27th June or whether you then view your situation differently.

As I’m writing this, I have the BBC broadcast of the Diamond Jubilee flotilla on in the background and the media coverage of this weekend is massive (60 years of the Queen’s reign in the UK). The Venus transit of the Sun is in Gemini, the sign that rules the media, gossip and communication, so the Sun/Venus conjunction seems to be about this huge celebration that gives people everywhere a chance to have fun, make new friends, and be happy.

Ultimately, the Sun & Venus together in Gemini encourages the feel-good factor and perfectly symbolises the UK’s street parties and media frenzy. Whether you’re gathering with neighbours for a Jubilee lunch or celebrating with family and friends, this happy occasion is being broadcast around the world reaching out to a wider global community. We may come to discover that the Venus transit has wider implications for our world, but for now one big glorious party with people smiling and happy will do for me.

[transit – a transit usually refers to the movement of a planet when it aligns with planets in a natal or birth chart. In this respect, it’s talking about two planets aligning in the heavens.]